Lucknow, the capital of Uttar Pradesh, is one of the largest cities of Northern India. It is a city that is known for its rich cuisine, delicate embroidery, colonial buildings, spectacular gardens, and Urdu poetry. It is one of the major tourist destinations of North India, with many archeological monuments and historical landmarks. With so much to see, we have chosen the best places to visit in Lucknow.

20 Incredible Places to Visit in Lucknow For a Complete Experience

One of the finest historical monuments in Lucknow, Bara Imambara, is an architectural marvel and a gem of engineering. It has a central hall, which is believed to be the largest arched hall in the world.

The Bhulbhulaiya, a complex sequence of labyrinths, whose passages are interconnected, is another spectacular structure inside this shrine. If you happen to reach the top successfully by this labyrinth, you are greeted with an amazing landscape view of Lucknow.

Located close to Bara Imambara, Chota Imambara is another marvelous monument in Lucknow. Built in the 19th century, it is elegant interiors and exquisite carvings. At the time of festivities, it is adorned with beautiful chandeliers and colorful lamps that give it a mesmerizing look. The exteriors have Quranic verses and beautiful Islamic calligraphy on the walls.

This is one of the most impressive monuments of Lucknow. This majestic gateway is the entrance to the old city of Lucknow. Also called Turkish Gate, the structure is a fascinating example of Awadhi architecture. The design has decorative elements taken from architectural styles found in Istambul and Rome. It is adorned with beautifully carved flowers and designs.

This clock tower stands near Rumi Darwaza and is the best example of British architecture in Lucknow. Built in 1887, this 7-story clock tower is India’s tallest clock tower. It is built of gunmetal, brought from London, and has gothic elements in its construction. It has a 14 feet long pendulum and a dial in the shape of a flower.

Among the many green spaces in Lucknow, this spectacular garden is the best place to enjoy a serene time among lush greenery. The garden is named after the renowned political leader, Dr. Ram Manohar Lohia.

Divided into four courtyards with entry points in each one of them, the garden has a jogging track along its borders and excellent stone paths to walk in the garden. There are seasonal plants, flowering trees, and plenty of greenery around. Benches to sit on, children’s play area, and other facilities are in this park.

One of the top attractions of Lucknow is Satkhanda. This watchtower is made of red bricks and is a monument of immense visual beauty. Originally it was meant to be a 7 story high tower, but only 4 levels could be completed.

Drawing inspiration from the Leaning Tower of Pisa, the tower is a visual treat for visitors to Lucknow. A striking blend of Greek and Islamic styles of architecture, Satkhanda has an octagonal base, triple arched windows, and spiral steps to go to different levels.

One of the most beautiful gardens of Lucknow, Sikandar Bagh was built in 1800 by the last Nawab of Awadh. It was one of the places to have stormed by the British during the 1857 rebellion. Today it is occupied by the National Botanical Research Institute of India.

The garden has a huge variety of medicinal, ornamental, and aromatic plants, in addition to numerous herbs, shrubs etc. Every winter, the institute organizes flower shows. There is also a cultural space inside for cultural shows and performances.

Among the most impressive structures of Lucknow is the Shahi Baoli, or Royal Step Well. Built as a water reservoir, the step well has a magnificent architectural design. Its reference is found in the travelogues of royal guests who describe its most striking characteristic, the secret views of the reflected images of people standing at the entrance, on the waters of the well.

There is also mention of halls and restrooms in the structure for guests visiting this place.

Among the most historical places of Lucknow, Begum Hazrat Mahal Park was built in memory of Begum Hazrat Mahal, the first wife of Nawab Wajid Ali Shah. She played a crucial role in the uprising of 1857. The park has beautiful fountains, stoned pathways, various trees and flowering plants. It’s a tranquil place, situated away from the chaos of the city.

Lucknow has some spectacular gardens and Gautam Buddha Park is one of them. It is the perfect place for relaxation for kids as well as elders. It is a place of lush greenery and serene tranquility. Visitors to the park can enjoy paddle boating and leisurely time at the park.

There are many loop canals under which you can steer the boats. There are green lawns, kid’s rides and swings inside the garden. Food is also available in the park.

Lucknow State Museum is one of Lucknow’s most impressive museums. It has a number of rare antiquities and priceless collection of paintings, bronze sculptures, manuscripts, ancient relics, among other things. It has exhibits relating to the arts and culture of Awadh, with many objects being excavated from the nearby regions.

Particularly interesting is the Egyptian mummy and its wooden sarcophagus dating back to 1000 BC, a 17th-century jar of wine bearing the name of Aurangzeb Alamgir, and a 16th-century painting depicting a scene from Kalpasutra.

One of the major attractions of Lucknow is Lucknow Zoo. Built-in 1921 to celebrate the arrival of Prince of Wales, the zoo is home to several animals, birds, and reptiles. It is known to breed endangered species like White Tiger, Indian Wolf, Hog Deer among others.

You can see the Royal Bengal Tigers, Himalayan Black Bears, Hoolock Gibbons, Indian Rhinoceros, Great Pied Hornbill, and other exotic species of animals and birds. Children can have great fun in the toy train at the zoo.

Though this historic landmark in Lucknow is in ruins, it once was the site of the famous uprising of 1857 and the Siege of Lucknow. It served as a refuge for British soldiers, whose graves can still be found inside, along with the bullet-riddled walls, marks of cannon balls on the walls, and other ruins.

The main building houses a museum that has photographs, canvas paintings, and other artifacts of the revolt of 1857. The main building is surrounded by lush green carpeted lawns and gardens.

Another specimen of amazing architectural beauty, Dr. Ambedkar Park was built to honor the lives of great Indian leaders, who devoted their lives to protecting equality, social justice, and humanity.

You can see effigies of great leaders like Bhimrao Ambedkar, Kanshi Ram, and others. The building is made of red sandstone and has landscaped lawns, columns, and various canals, that make the ambiance most serene and peaceful.

If you want to see the rich legacy of British, then Constantia House is the place to go in Lucknow. This building has the famous La Martinière College. A striking example of Italian architecture, Constantia House played an important role in the Revolt of 1857.

Inside, there is the tomb of the French General, Major Claude Martin, who constructed this grand building. French carpets, richly decorated mirrors, antique paintings, and many other vintage décors were imported from foreign countries to give a royal look to this illustrious building.

If you want to shop and have a great time in Lucknow, visit Hazratganj. Located in the heart of Lucknow, Hazratganj has numerous coffee shops, fine dining restaurants, traditional shops selling jewelry, handicrafts, handlooms, electronics and other items.

There are bookshops, movie theatres, and shopping malls, where you can spend the evening shopping or relax in the ambiance. It is a favorite haunt for lovers of street food, and also for those who like to go out at night for partying. At night, the place gets illuminated with many colored lights and activities.

This elegant building was built by the Nawabs of Lucknow and is a major tourist landmark of Lucknow. Its name is derived from the umbrella-shaped dome on the monument. It serves as a safe shelter for the revolutionaries during the 1857 uprising.

Showing a distinct touch of Indo-European architectural styles, this palatial building once served as the royal residence of the Nawabs of Awadh. Still reminding visitors of the vintage charm of Lucknow, the building today houses an office of the Central Drug Research Institute (CDRI).

Chowk is the oldest marketplaces in Lucknow, with more than 5000 shops. You can buy the most spectacular handcrafted ornaments and handicrafts, made from bamboo, ivory, and wood.

The market is the best place to buy traditional chikankari and zardozi dresses, famed for their delicate embroidery on fine muslin and silk garments. For those who love street food, there are eateries and shops offering authentic biryani, kebabs, parathas, and other Awadhi foods.

This 18th-century palace, though in ruins, will give you a glimpse into the royal times of the Nawabs of Awadh. Showcasing elements of European architecture in its design, it was originally built as a hunting lodge, but later on became the residential house of the Nawabs. Visitors can still watch in awe, its walls, towers, and walk in the gardens, soaking the relaxing ambiance of this place.

This stretch of road along the Gomati River attracts youngsters and hip crowd to hang around and have a good time. After sunset though, the whole place gets transformed with colored lights illuminating the riverfront, beautiful fountains of water, and a cool breeze to enjoy. There are many street food joints, an amphitheater, jogging tracks, and the AC river bus to enjoy boating on Gomati River.

Though there are others places to visit in Lucknow, the list above contains the top ones. Lucknow can be even more exciting, even more, beautiful than you expect it to be. Its blend of Mughal and British heritage has given this city rich treasures and monuments that fill visitors with awe and surprise.

If you have been to these places in Lucknow, or know of even more exciting places of tourist interest, do write your comments in the section below. It will guide others visitors in planning their tour of Lucknow. 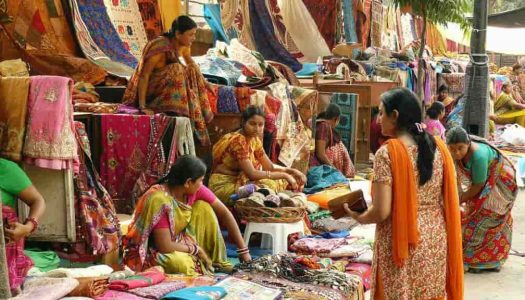 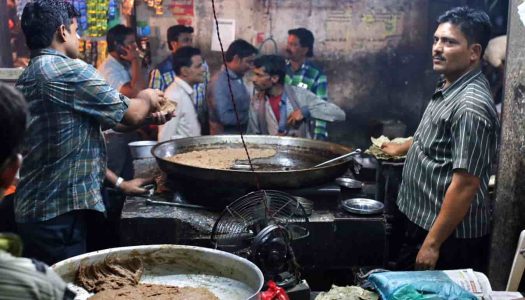 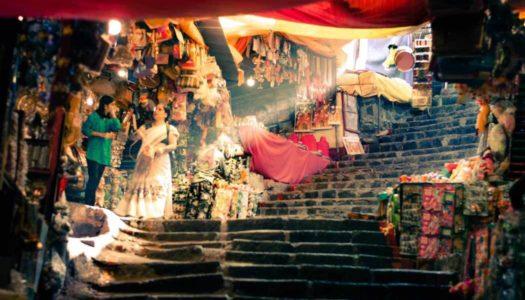 Tehzeeb is a Persian word for showcasing a refined and educated persona. This word is used a lot in Lucknow, a city that was built on the ideals of art, ... 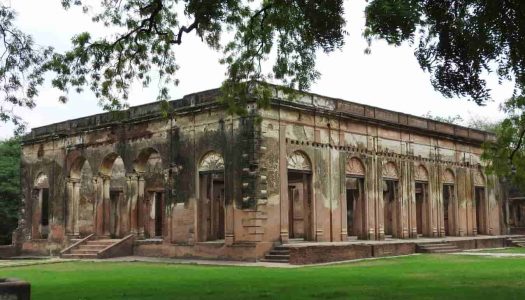 Talking of after midnight actions, there are an only a handful of cities other than the metropolitan cities that promise some action in India. Lucknow proves to be one such ...