18 Awesome Places to Visit in Nashik

Situated on the banks of Godavari river, Nashik is a holy city and a popular destination among Hindu pilgrims. Nashik is one of the four places in India where Kumbh Mela is celebrated every 12 years. It is also the wine capital of India, as half of India’s vineyards and wineries are situated here. Nashik has many famous places, which are famous among visitors. While many of them may prove to have religious significance, some don’t. Let’s look at a list of the best places to visit in Nashik.

Places to visit in Nashik: Rest and Relaxation 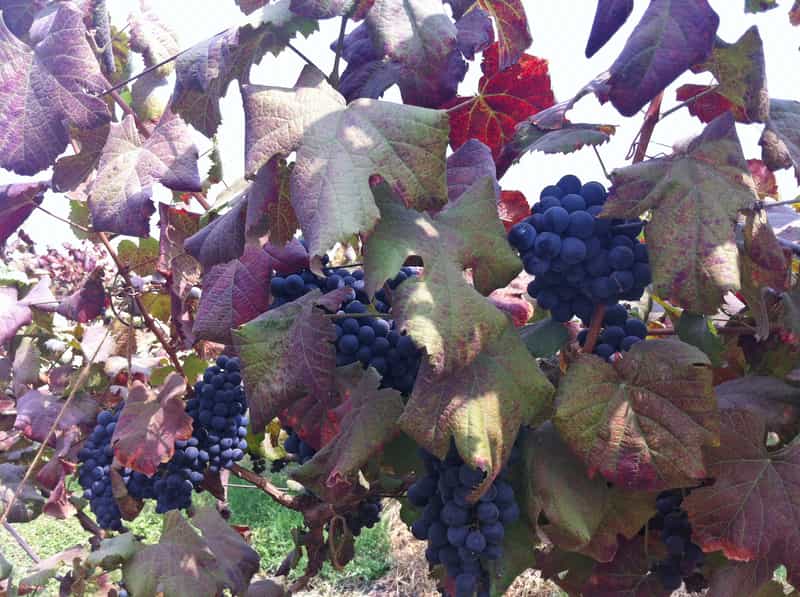 Succulent Grapes on the Vine

Renowned for the quality of its grape vines, this vast estate is open to public for a wine tasting and a tour of the vineyard. Home to sixty wineries, this winery even lets you enjoy a grape stomping activity between January and March. Other attractions include a resort, two restaurants, a gift shop and a bottle shop, making one of the best places to see in Nashik. 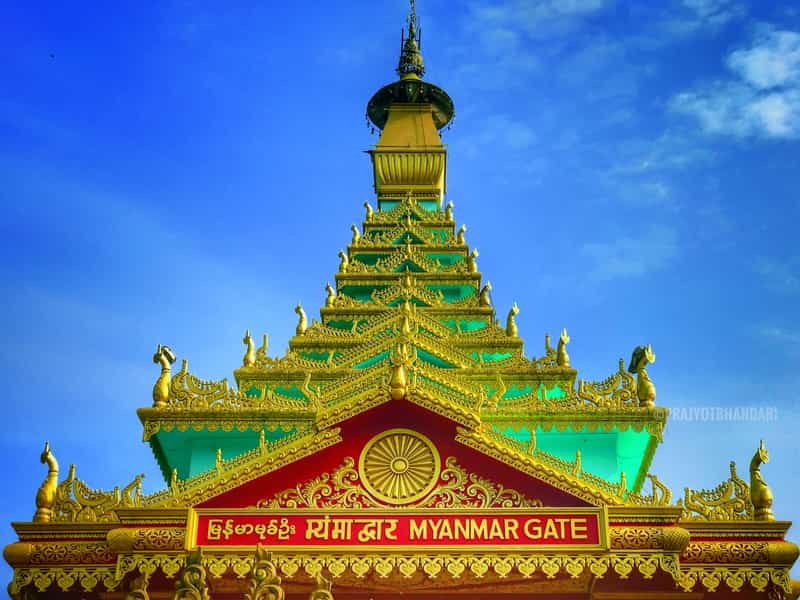 This wonderfully-green valley full of waterfalls, forests, birds and a wildlife sanctuary is a great place to visit for rest and recuperation from the stresses of a daily grind which every city imposes on its denizens. For those who want to find real peace, Igatpuri also offers the Vipassana Meditation Academy which imposes silence on its participants and helps them find themselves. 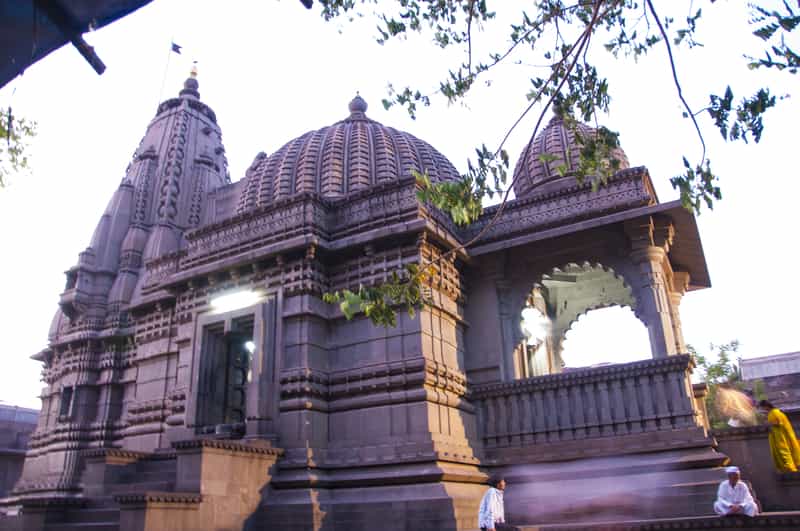 Devotees at the Kalaram Temple

This old Hindu shrine dedicated to Kala (swarthy or black complexioned) Rama, a Hindu God and an avatar of Lord Vishnu, is among the places to visit in Nashik. Built around 1788 by a devotee whose dream directed him to the God’s idol in the river Godavari, this may be considered to be the most important Hindu temple in the city. 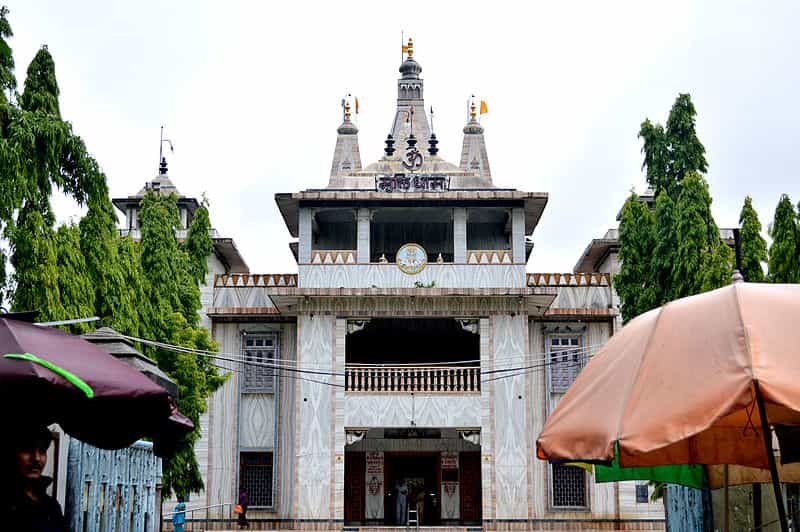 This marble temple complex which honours various Hindu gods is a major tourist attraction and a famous place to visit in Nashik. The 12 Jyotirlinga replicas here were sanctified by being sent to their respective originals for sanctification. The paintings in Lord Krishna’s temple depicting scenes from Mahabharata and the life of Krishna by an eminent painter, Raghuvir Mulgaonkar, are an additional attraction. 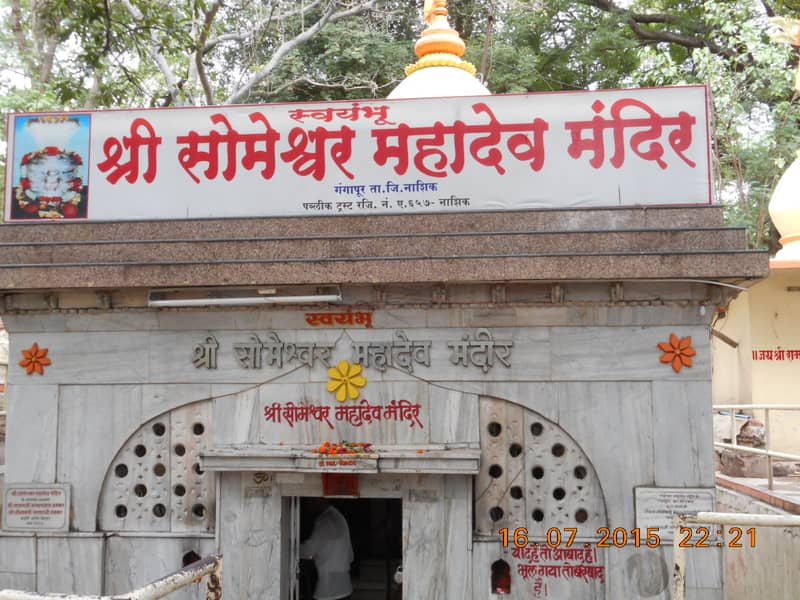 This beautiful temple is among the famous places to visit in Nashik, as the surroundings are natural and nature lovers absolutely adore visiting this place. The temple offers a panoramic view of the Godavari River, in an elegant curved path. Enjoy the boating facility and go on a boat ride here. 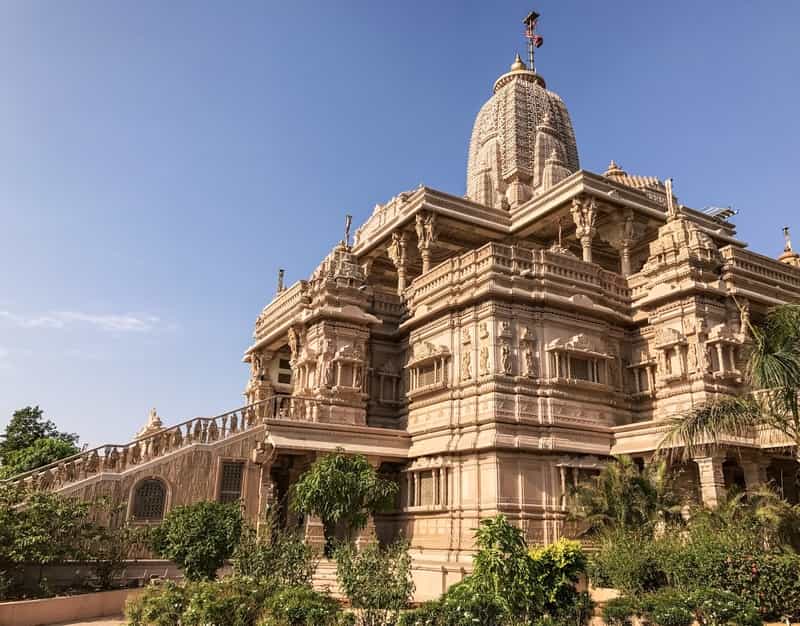 Excellent Architecture of the Jain Temple at Nashik

Visit here to see the 12-ton statue of the 24 Tirthankaras at the sprawling temple complex built of white marble and pink sand. Facilities like food and stay are exceptional, and non-Jains also find themselves enjoying a visit here and doing puja as the pujaris are friendly and supportive. 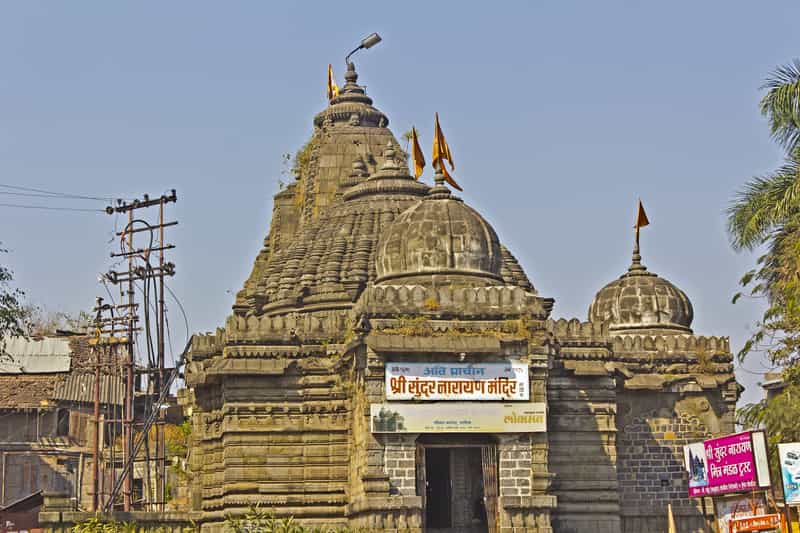 Built by Gangadhar Yashwant Chandrachud in 1756, this temple of Sundar Narayan (or beautiful Narayan or Lord Vishnu) showcases a Mughal style of architecture in its arched recesses. We find Lakshmi to his right and Saraswati to his left, in this temple which is built in such a way that the rays of the rising sun fall exactly upon the idols in the sanctum sanctorum on every March 21st. 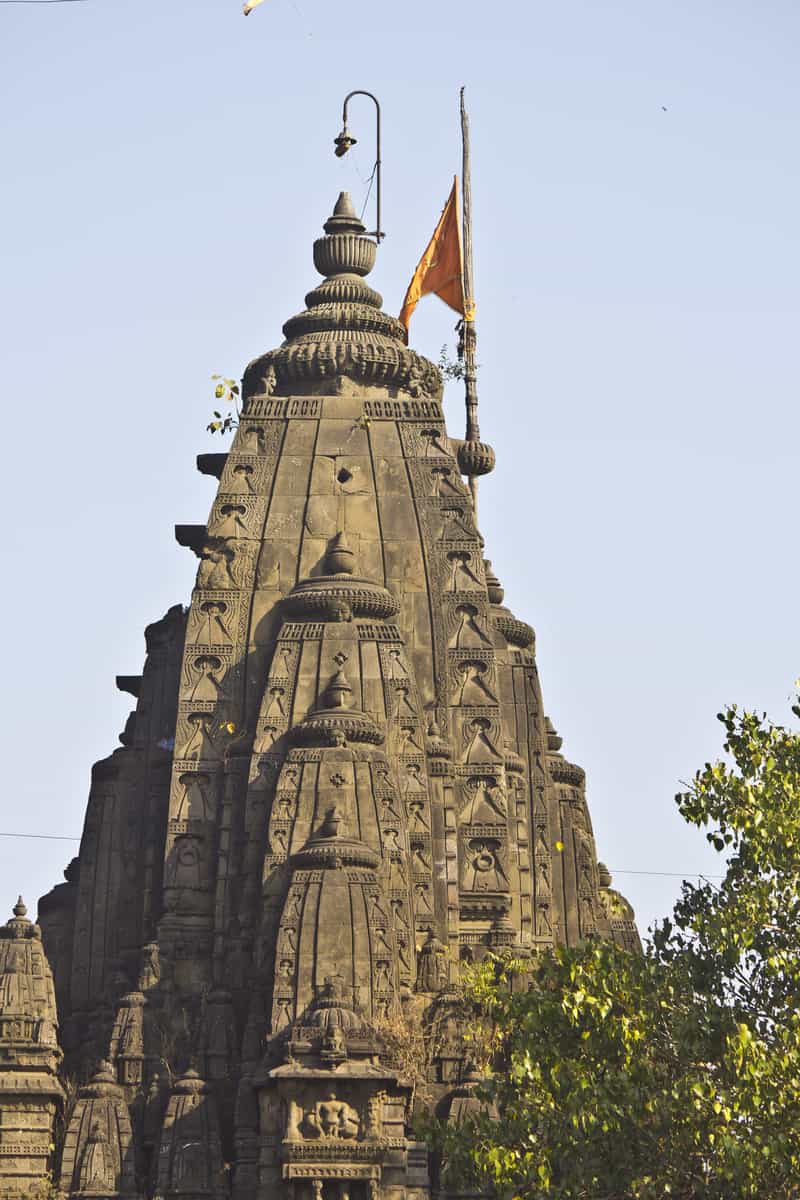 The Famous Naroshankar Temple at Panchavati

This beautiful temple of Rameshwar was built by Naroshankar Rajebahadur in 1747, using the Maya style of architecture. The main temple is built on a platform and the sculpture and designs are striking with decorative lacework and depictions of birds, animals, trees and nature in general. 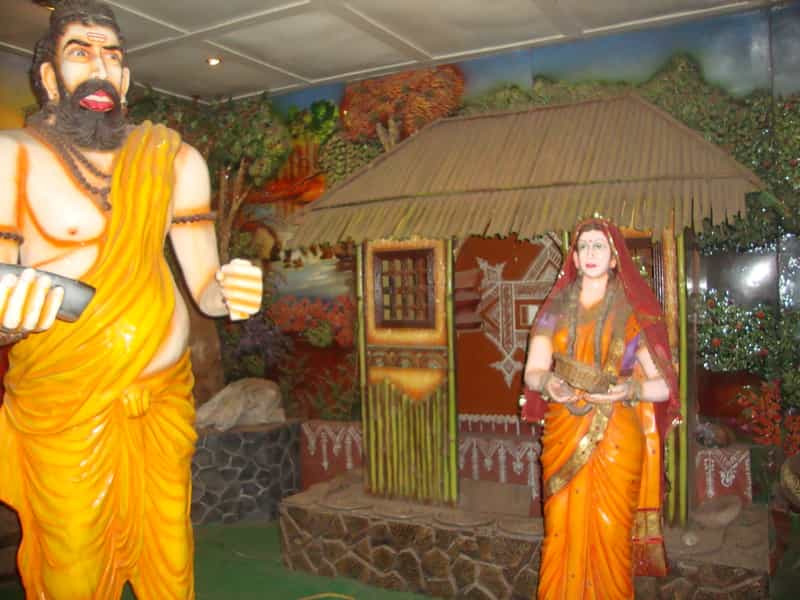 A Scene from the Ramayana at Sita Gufaa

Believed to have been the place from where Ravana kidnapped Sita in the Ramayana, this is another place of pilgrimage located in a place called Panchvati where Ram, Sita and Lakshman were supposed to have lived in Vanavasa (a penance requiring stay in the forest). Do visit the Tapovan where Lakshmana is said to have cut off Shoorpanakha’s nose and the eleven cavernous caves as well as the five banyan trees. 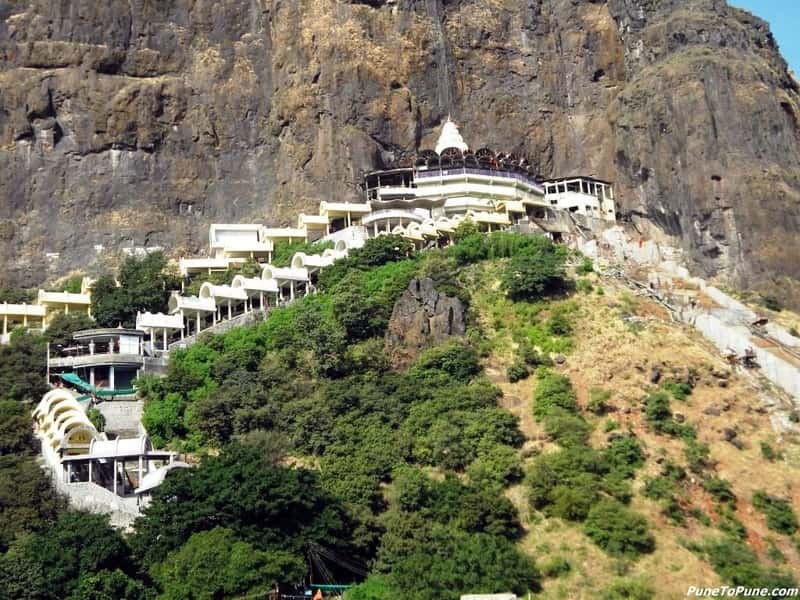 A View of the Saptashrungi Devi Temple

The temple of Saptashrungi Nivasini (Goddess Living on Seven Hills) is ancient and said to have been visited by Rama, Sita and Lakshman when they lived at Panchvati. These majestic hills are incredibly fertile and beautiful to look at. The forests on the hills are full of medicinal herbs and enjoy a distinct connection to the Ramayana, as being the hills where Hanuman obtained the Sanjeevani herb for Lakshmana, when he was knocked unconscious in battle. 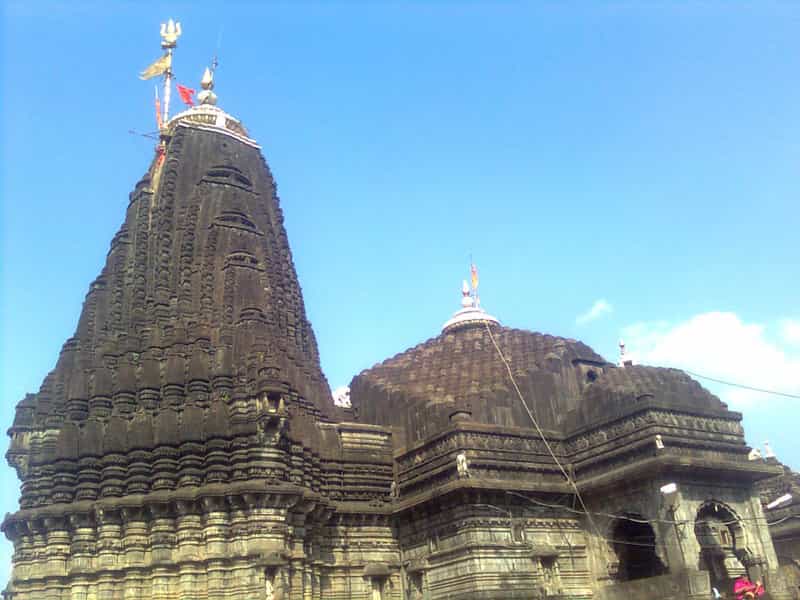 This Shiva temple was built between three hills, Brahmagiri, Nilagiri and Kalagiri and houses three lingams to represent the three major Gods of the Hindu Pantheon: Shiv, Vishnu and Brahma. This temple is one of the 12 places where devotees can find a Jyotirlinga, the pillar of light without beginning or end that represents supreme reality.

Places to visit in Nashik: Nature and Historical Sites 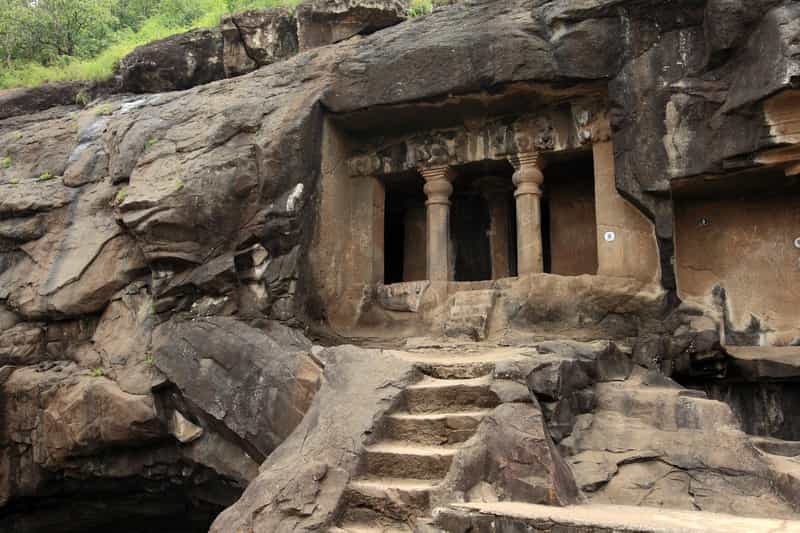 Caves at Nashik from 3rd BC

Located 8 km south of Nashik, the Pandavleni caves are a group of 24 caves which date back to 1st century BC to 2nd century AD.  Except for Cave 18 which is a Chaitya, all the caves are viharas and the place is considered a holy Buddhist site. These beautiful and ancient rock-cut temples offer us a glimpse into the past and showcase the skills of ancient humans. 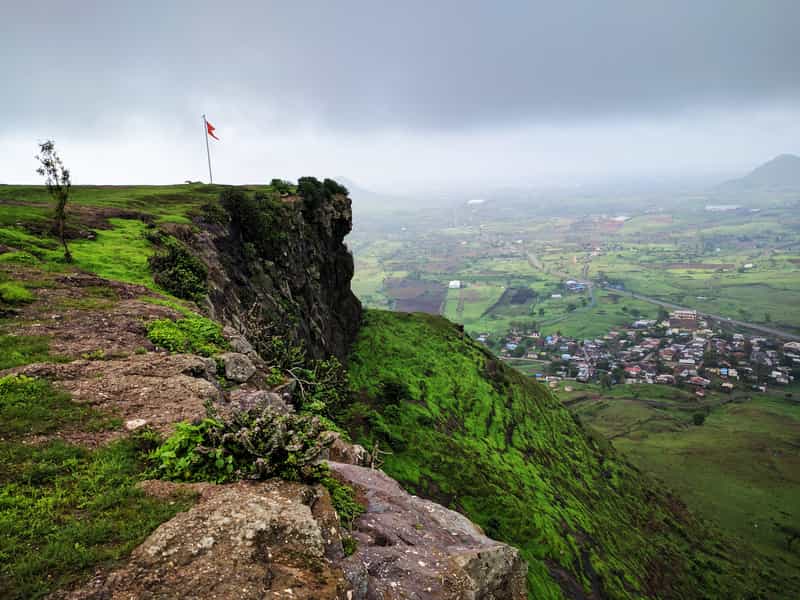 Ramsej Fort is important in the way it helped Maharashtra’s invincible stand against invasion by the Mughal armies for six and half years, before it fell to treachery when the leader of the forces himself succumbed to bribery. Replete with history and representative of the pride of the Marathas, this Fort is a major tourist attraction and one of the places to visit in Nashik. 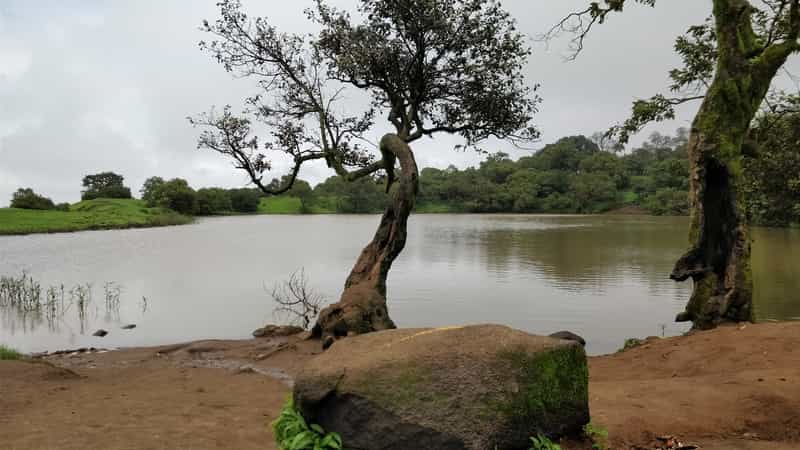 Once again of religious significance, Anjaneri is an exquisite attraction and a place which must be visited at Nashik. Considered to be the birth place of Hanuman, the hill is named after the mother of Hanuman, named Anjana Devi. You will find 108 Jain caves here dating back to 12th century. The image of Hanuman here has 5 heads, unlike in any other temple in India. 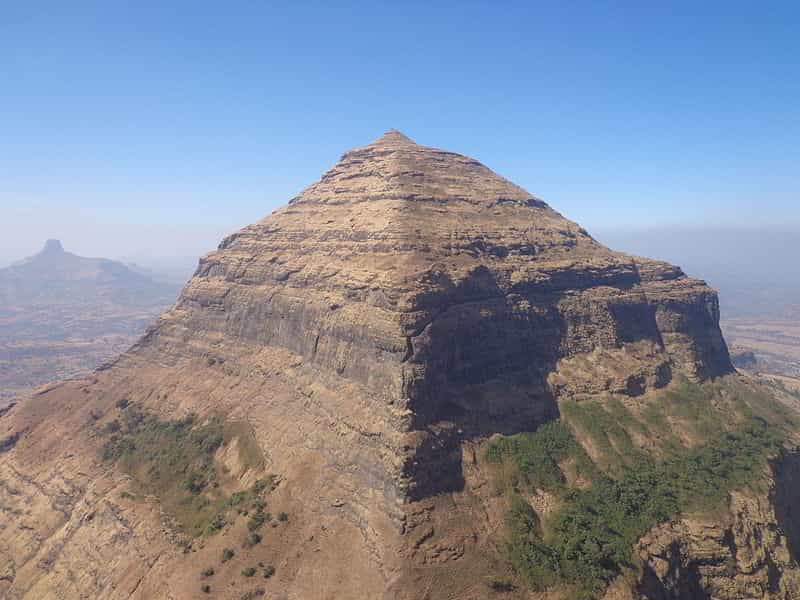 This peak is the second highest in Maharashtra (the first being Kalsubai), at 1567 metres and us home to one of the celebrated forts of the Maratha rulers. Famous for its significance during the reign of Shivaji, Salher has a twin fort, named Salota close by. The Battle of Salher, in which over one lakh soldiers participated, was fought in 1672 and won by Shivaji. 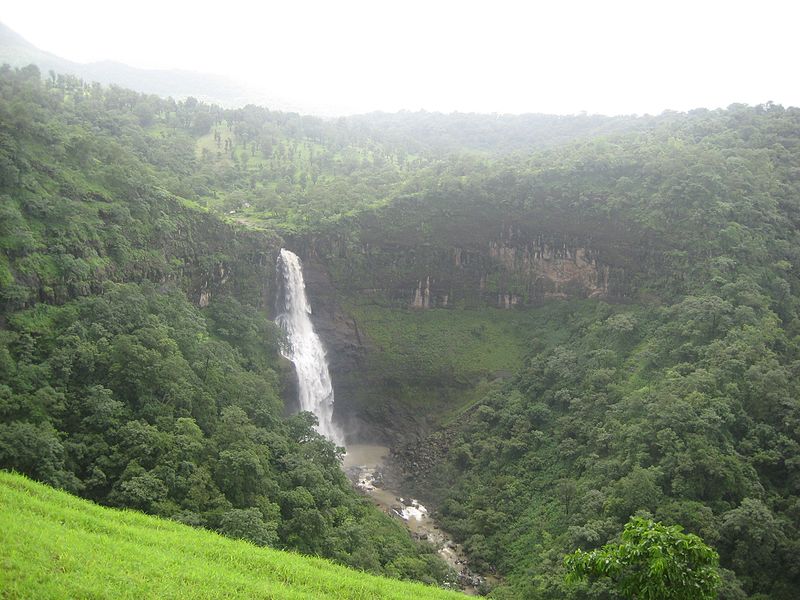 Stunning View of the Dugarwadi Waterfalls among the Greenery

This impressive waterfall is about pristine surroundings and lush greenery.  The hills here are topped by clouds and fog to mesmerise a visitor to this beautiful sightseeing destination in Nashik. Visiting the waterfall requires a 1 to 2 km walk, and caution if visiting during rains as the water level could increase very suddenly. 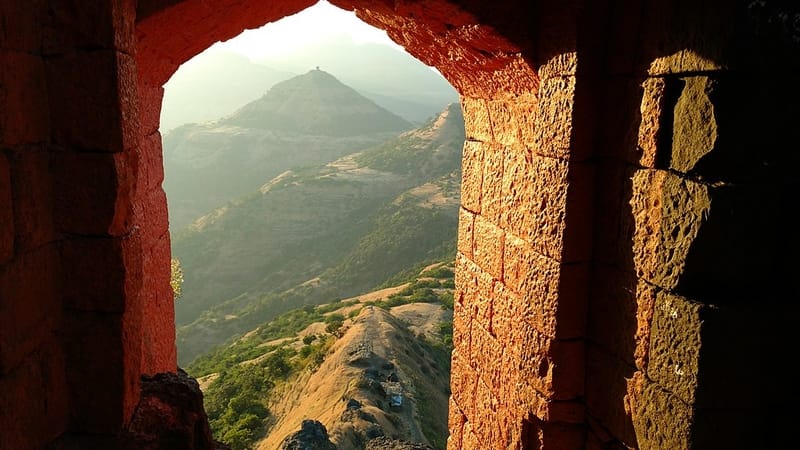 View from the Top at Harihar

This fort belonging to the Yadava dynasty lies in ruins today. The climb to the top over a 60 meter path of rock-cut steps is an amazing experience and you could find accommodation on the fort itself or in the villages surrounding the fort. Don’t miss the rock-cut water cisterns at the centre of the fort. 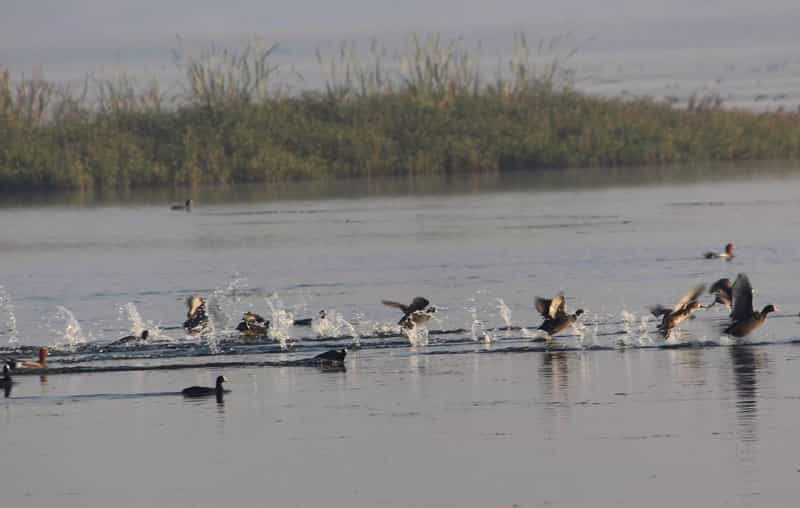 Also known as the Bharatpur of Maharashtra, this bird sanctuary is a great destination for anyone interested in watching birds at close range. A variety of birds can be found here, including migratory birds. An environmentally rich area with diverse flora and fauna, it also offers you a dam and a museum, making it one of the great places to visit in Nashik

Do enjoy yourself at Nashik which is full of natural beauty and amazing sightseeing places as well historic places of importance and religiously significant temples. The association of Nashik with Ramayana is an important aspect of its attraction for the religiously inclined. Whoever thought they could go grape stomping and wine tasting without heading to the vineyards of Europe and paying for the experience in Euros? Do write in and tell us of your experiences at Nashik. We hope you will have a wonderful time. 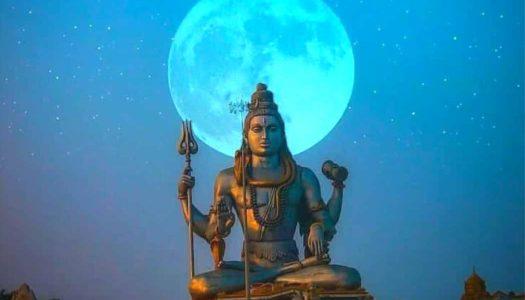 Devotees of Lord Shiva may now rejoice in one of his most important festivals. Maha Shivratri, also known as the Great Night of Lord Shiva, is observed between February and ... 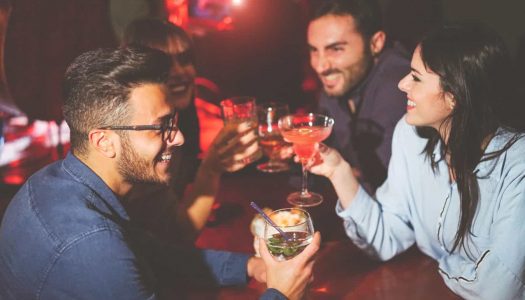 16 Places That Make The Nightlife in Nashik

Though Nashik is predominantly popular as a destination of religious tourism for Hindus, you can enjoy a scintillating night life at Nashik when you are there, as a resident or ... 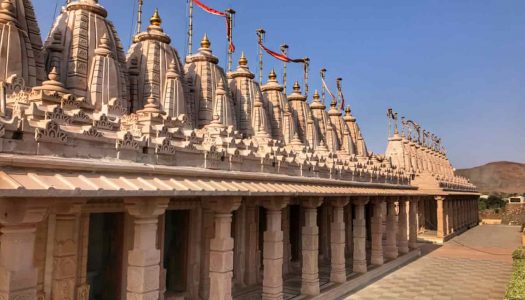 18 Things to Do in Nashik

Nashik is a holy city in Maharashtra, around four hours away from Mumbai. The mighty river, Godavari, has its origin in Nashik. An idyllic place with excellent weather for at ... 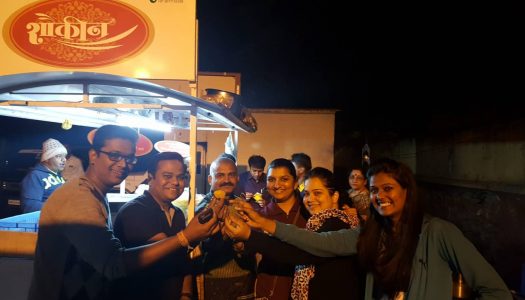 12 Best Street Food in Nashik & Where To Get Them

The attraction of street food in any city is irresistible and Nashik is definitely not an exception. The best street food in Nashik offers visitors a range of special local ... 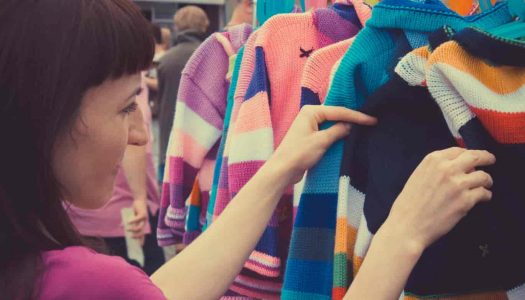 The 6 Best Shopping Places in Nashik

The cradle of the Kumbh Mela, Nashik sits on the banks of the Godavari – a part of the ancient history of India. Lined with vineyards and wineries, with ideal ... 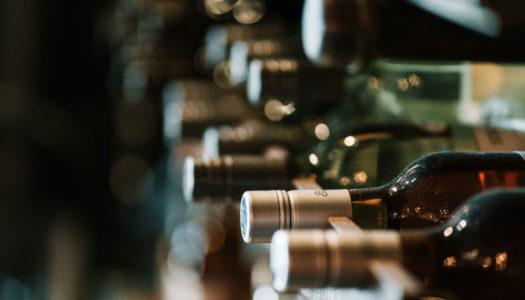 Visit these vineyards for a perfect dine & wine in India

Valentine’s day is just around the corner. The time is right to set plans for the most perfect date with your perfect companion. Got any plans to celebrate the big ...