The cultural, ethnic and religious diversity in India has given rise to myriad festivals that are celebrated with unparalleled enthusiasm by Indians across all demographics.

The festivals minor or major, herald the days of joy that Indians unfailingly look forward to. Travelling across Indian cities during its festival period is like navigating a stunning yet chaotic mess full of bright colours and loud sounds. Whether national or religious festivals in India, each of them is celebrated with the same vigour and zest by the citizens of this diverse country.

Let’s take a look at some of the more mainstream festivals enjoyed nationally. 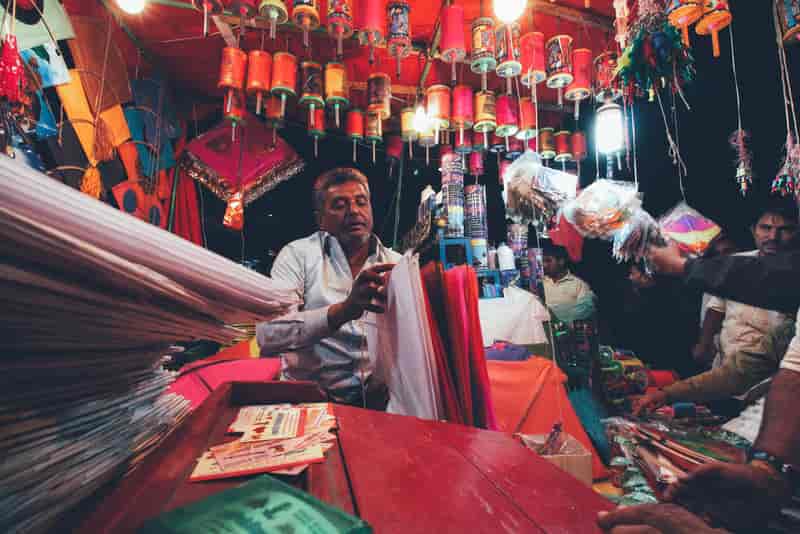 Celebrated to mark the solar cycle and to venerate the Sun (a religious symbol in Hinduism), Makar Sankranti is celebrated across various states of India under different names (eg Lohri, Pongal). Festival customs vary too but mostly Hindus pray for an abundant agricultural wealth marked by this stage.

In Gujarat and Maharashtra, the festival is celebrated by flying kites while in the South special meals are prepared to celebrate. The common feature everywhere is sweets made of jaggery. 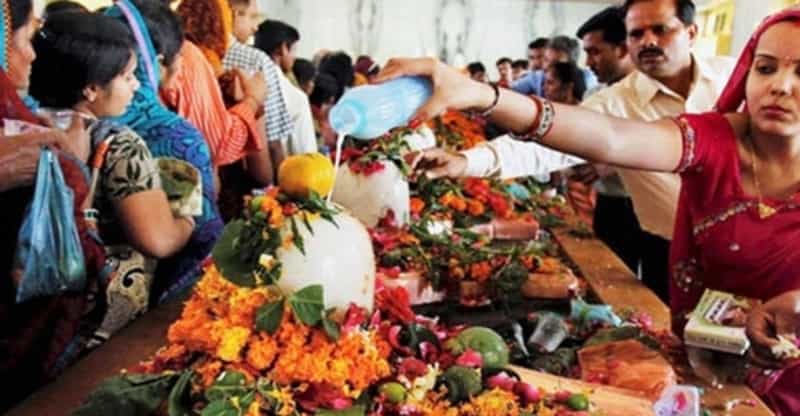 To honour Lord Shiva, one of the main Hindu gods, Maha Shivratri is celebrated to remember the end of ignorance and darkness of the human condition, destroyed by the eternal wisdom of Shiva.

Devotees observe a nightlong vigilance (Jagran) and fasting. The major Jyotirlingas across the country are abuzz with festive customs, including dancing, chanting and praying. Hardcore devotees flock to the Ganges for a morning dip. Shivlings are bathed in milk and fruit and leave offerings are made. 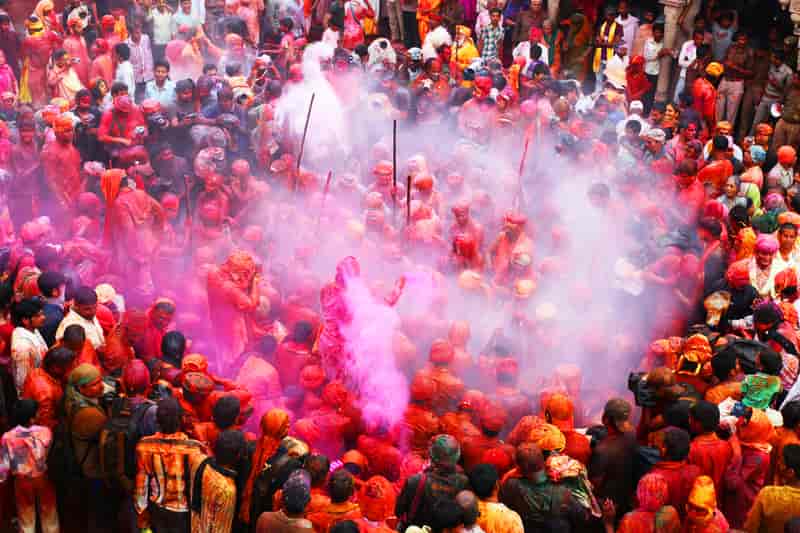 The spring festival of colours is celebrated with feverish excitement, making it the most camera-worthy spectacles in India. The night before Holi, bonfires are lit and people circumambulate the fire, which symbolises the end of Holika, sister of a demon king.

On the day of Holi, people sing songs accompanied by drums, dance after drinking locally made bhang and smear coloured powder over each other. The festival marks the beginning of spring. Holi celebrated in Varanasi and Mathura are legendary.

Book a stay with top hotels in Varanasi or Mathura to enjoy the Holi festival in full splendour. 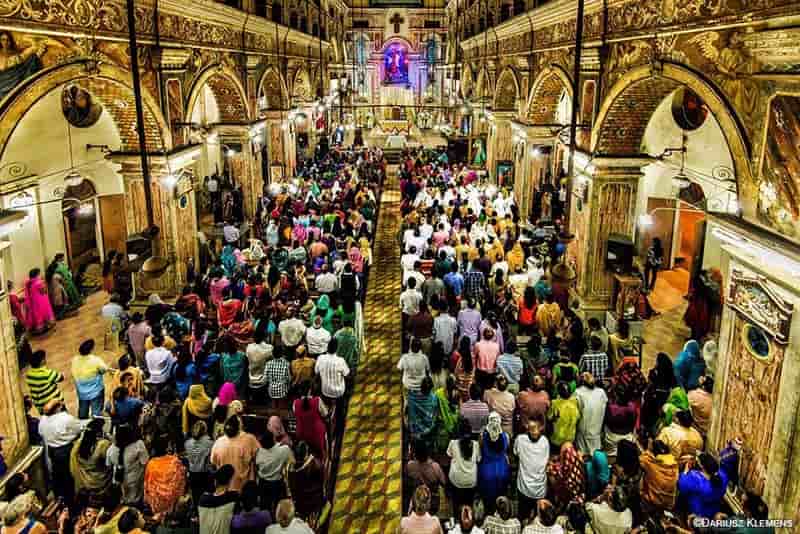 One of the most important festivals in Christianity, Easter is celebrated all across India. Easter is the day to celebrate the resurrection of Jesus Christ after his crucifixion.

Devotees attend Easter Service at church, most attend the midnight vigil, before Easter. Simnel and chocolate cakes are made for the occasion. Easter is celebrated with great fervour in Mumbai, Goa, Pondicherry, Kerala and northeastern states of India. Believers gift colourful easter eggs to each other, a special feature of the festival. 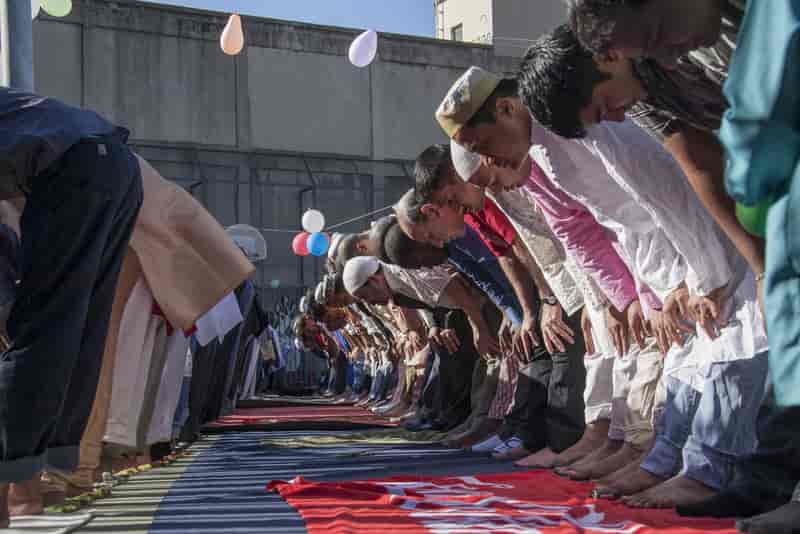 An important festival of Islam, Eid al-Fitr is celebrated at the end of the fasting month of Ramadan. It is the feast of breaking the fast.

Upon the sighting of the moon on Eid, the fast is broken and specially prepared lavish feast is set out for devotees. Eid prayers are recited in open areas and mosques, followed by a sacred sermon. Sheer Khurma and Sevvaiyan are special sweet dishes prepared for the festival. Muslims dress in new clothes and make donations to the needy. 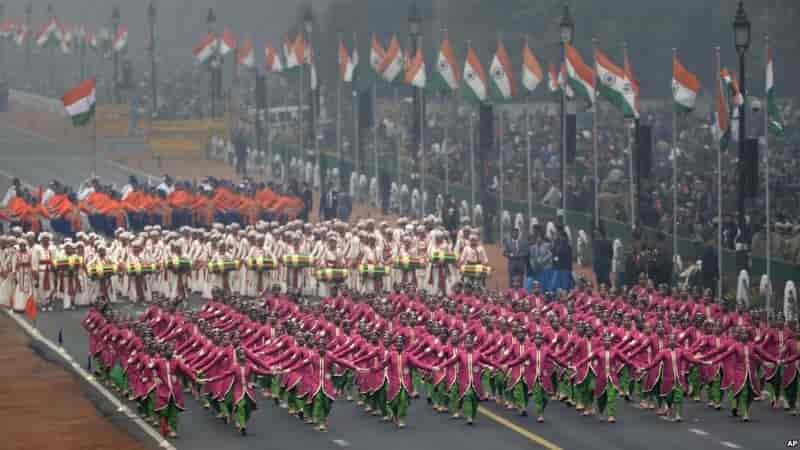 The day to celebrate the independence of India from the British Raj, Independence Day has a special place in the list of national festivals as it instils a sense of pride among Indians. On the eve of the Independence Day, the President of India addresses the country and the Prime Minister hoists the flag at Red Fort.

The national anthem is played in public places during flag hoisting ceremonies and songs of nationalistic themes are played on loudspeakers in all cities of India. 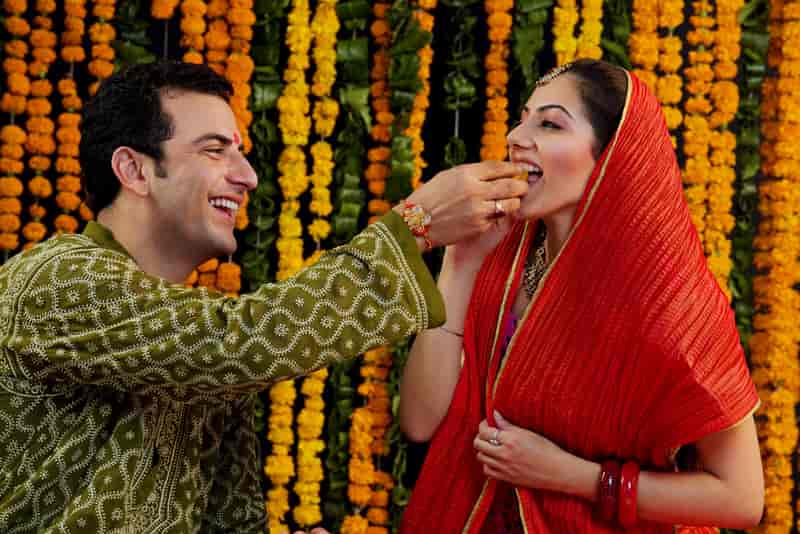 Observed by Hindus across the world, Raksha Bandhan or Rakhi is a festival where sisters tie a colourful, decorative thread on the wrists of their brothers and perform pooja for their long life and health.

The ritual symbolises a bond of protection which the brother is supposed to offer to the sister. In return, the brother gives the sister cash or gifts. Different regions have different customs. Shops are lined with colourful rakhis as the festival approaches. 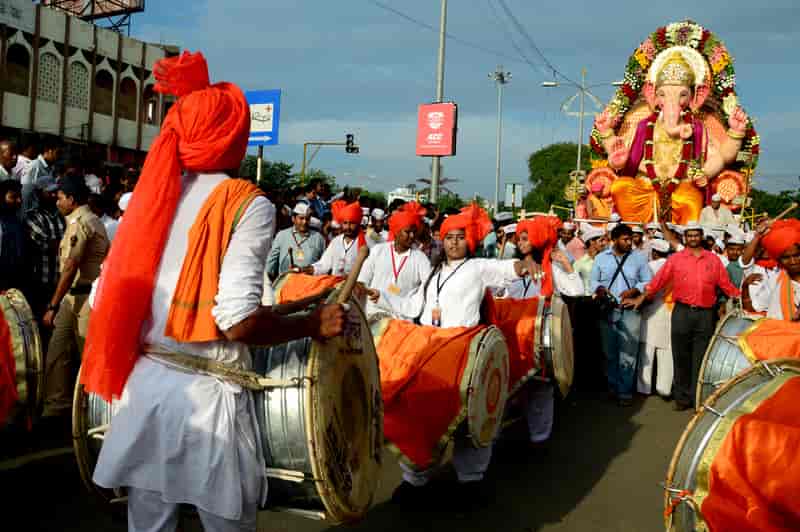 Ganesh Chaturthi in India is a ten-day festival observed to venerate Lord Ganesha, the son of Shiva and Parvati. Devotees bring home clay Ganesha idols and pray to them every day. Large mandaps (tents) are set up in public places where huge Ganesha idols are installed and prayers are conducted daily.

Special modaks (a type of Indian sweet) is distributed to believers every day. At the end of the tenth day, the Ganesha idols are immersed in a water body with a grand procession on the streets. 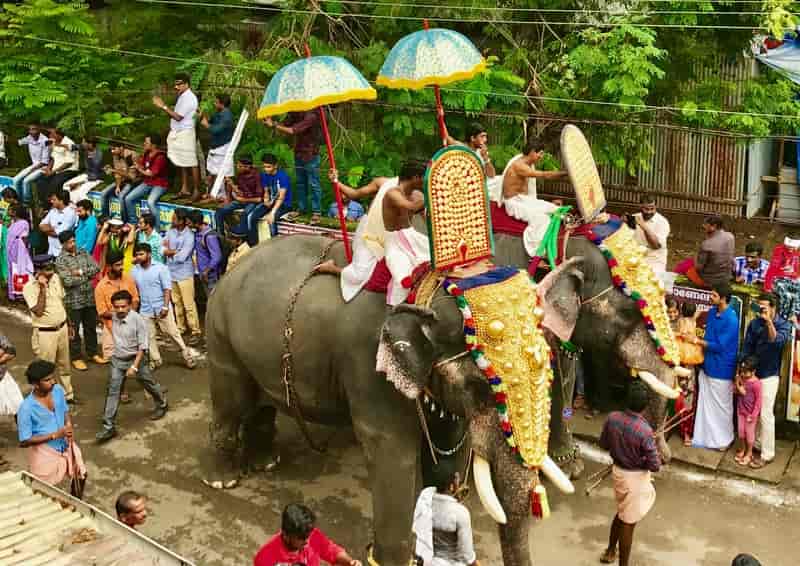 A major festival observed all over the south and wherever Malayalis reside, Onam is a harvest festival. Homes are decorated with beautiful flower arrangements and the people dress in their finest traditional clothes.

In Kerala, legendary boat races are held and a variety of dances are performed such as tiger dance, women’s dance, mask dance. Folk songs are sung and martial arts are displayed. The streets are full of festive colours and flowers. 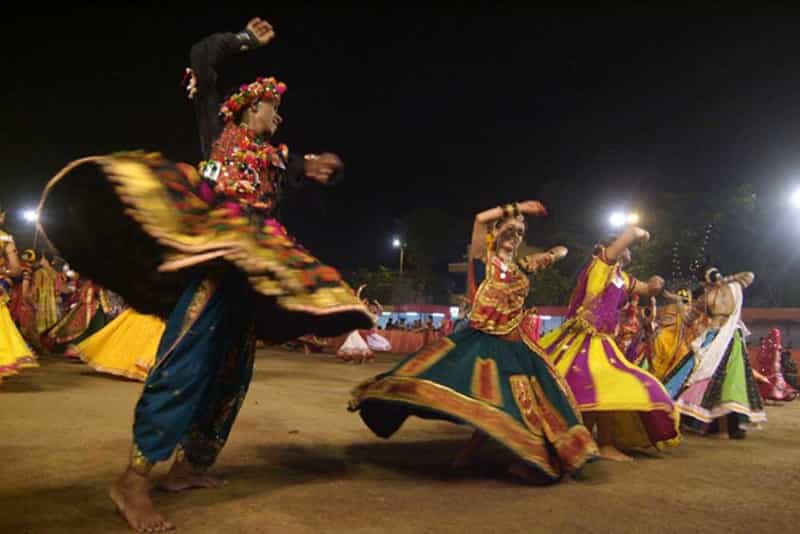 The festival of Navratri means nine nights, during which the feminine avatars of goddess Durga is celebrated. Different states and cities in India celebrate Navratri in different ways, following different customs during the nine nights. There are four Navratri periods according to the equinoxes, but the one in autumn is widely celebrated all over India.

In Gujarat, special dandiya and Garba Raas are held for nine nights where people dress in tribal costumes and play folk dance. In the eastern states, especially in Kolkata, Navratri is celebrated as Durga Pooja, a big occasion in the region. 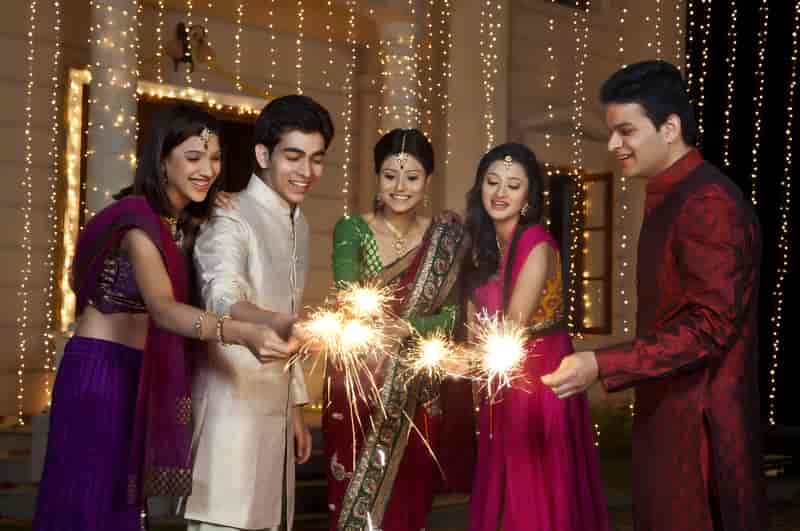 The most important festival for Hindus, Diwali is a ‘festival of lights’, and is celebrated with great fanfare in India and by Indians worldwide. Ayodhya, an ancient city home to Rama, is lit up fabulously during Diwali.

Signifying the triumph of evil over good, Diwali originated when Rama returned to his kingdom after defeating Ravana. Hindus light up their homes, buildings, streets, offices during the 7 day festival period, wear new clothes and decorate their homes with rangoli (coloured powder) and lanterns.

Distributing sweets, holding family pooja sessions, playing card games and lighting up fireworks are the essential features of the celebration. 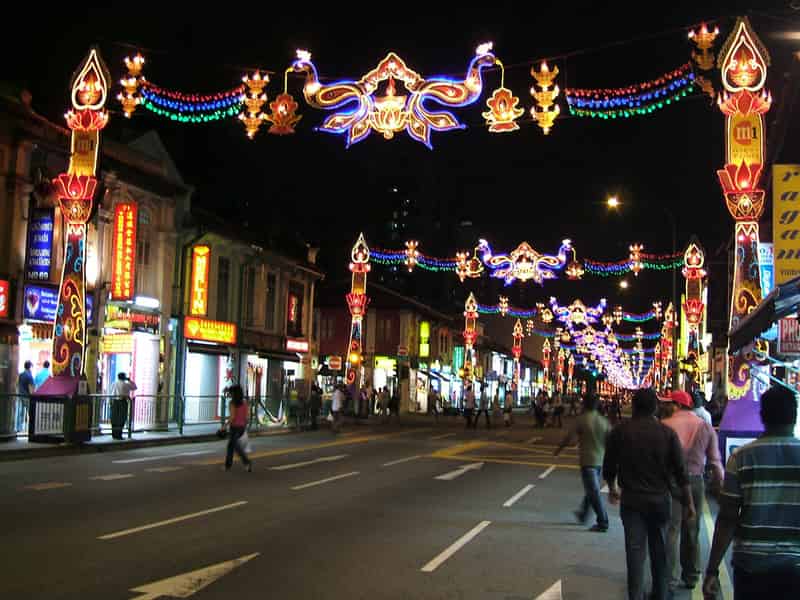 Streets in Mumbai Decorated For Christmas

Christmas is one of the most popular festivals in India. Marking the birth of Jesus Christ, the festival is not just limited to celebrations by Christians in India. People of all faiths celebrate Christmas holidays with great interest and enthusiasm.

Streets are lit with lanterns, electric lights, annual parties are held almost in every urban area,  and being a holiday season, a lot of big cities and tourist destinations in India are adorned with festive decorations. Mumbai, Goa, Manali, Delhi, Bangalore, Pondicherry, Kerala, Daman, Kolkata and Shillong are some of the places where Christmas festivities are at their best.

India is a country of festivals. To visit India during one of its many important festivals truly helps a traveller enjoy the cultural essence of the country. 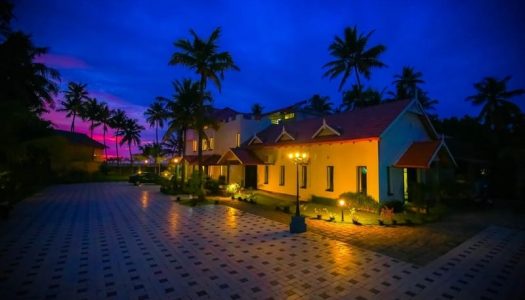 10 Travel Trends That Will Influence Your Travel Post COVID19 Pandemic

How will you plan your travels post COVID19 pandemic? Where would you go and how would you adapt to the new normal? These questions will cross your mind before you ...

The Buddha was the greatest sage and mystic of the East and one of the greatest spiritual teachers of the world. On his preachings, philosophy and 4 noble truths ... 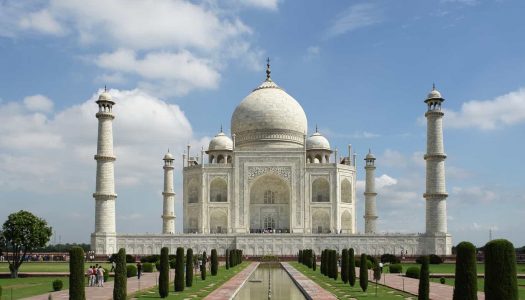 When you speak of historic places in India, the list is endless. Right from the north to the south, east and west, there are so many places that are ... 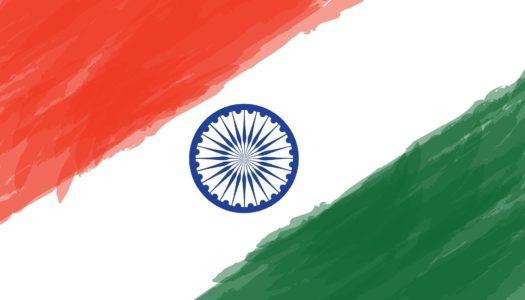 10 Important Facts About Indian Independence That You Must Know! 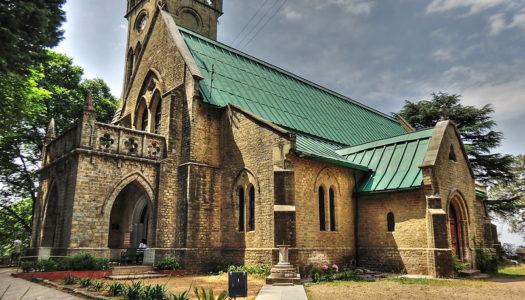 8 Best Places to Visit in Kasauli for a Quick Vacation

Kasauli is an exquisite hill station situated in the Solan district of Himachal Pradesh and is an amazing destination for a peaceful vacation. It is a cantonment and town established ... 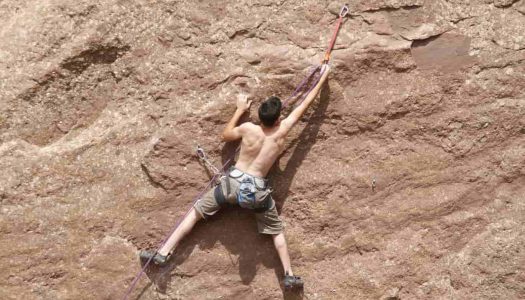 The Ultimate Guide to Rock Climbing in India

Rock climbing was once only enjoyed by those with unbelievable daring and high tolerance levels. Today, all this has changed, with proper equipment and great instructors. And we’re all the ...