Pune, the second largest city in Maharashtra, has evolved to become one of the most popular tourist destinations in the country. The city was once the seat of the Maratha Empire and the Peshwas. The city was then under the control of the British for many years, until it transformed into a centre for social and political reform. The city is still associated with the Indian Independence struggle with prominent leaders like Mahatma Gandhi, Gopal Krishna Gokhale, and Bal Gangadhar Tilak leading agitations here. Pune underwent a major facelift during the 90s in the globalisation era, but most of its colonial charm remained. This has made the city a pleasant coexistence of old and new. The city is considered the cultural capital of Maharashtra and is called the ‘Oxford of the East’ thanks to the number of educational institutions in the city.

Best Time to Visit Pune - Pune is set at a height of 560 metres above sea level and experiences a hot and semi-dry climate. The city experiences summer from March to June when temperatures soar up 40°c, it is advisable to avoid visiting the city then. The monsoons hit the city during the months of July to October and brings relief from the heat. Although the city sees tourists throughout the year, the best time to visit Pune is from July to February. The Gandharva Mahotsav Music Festival in December is a must-experience event during this time. Tourists have the option of choosing from many good hotels in Pune during this time.

If you’re looking for accommodation in the city, you’ll be pleased to hear that there’s something for everyone in Pune. You can choose from a range from luxurious serviced apartments to the more traditional options like two-star, three-star and budget hotels in Pune. These kinds of hotels are ideal for everyone from solo travellers, couples, corporate travellers, medical tourists and families. You never have to worry about seeking a middleman to book hotels in Pune. With the state-of-the-art and easy-to-use app, you will have your vacation planned with the tap of a screen. So why are waiting? Treebo is available in Salisbury Park, Hadapsar, Hinjawadi, Shalini Smridhi, Chinchwad, Koregaon Park, and Deccan Gymkhana. Book Popular Treebo hotels in Pune here: Treebo Hill View Ex, Treebo Viman Nagar, Treebo Regency, Treebo Olive, Treebo Mapple Adhwryou

Couple Friendly Hotels in Pune - Pune is a metropolis which has maintained a mix of the ancient and the new in a balanced manner. It is well known for its several renowned universities and colleges, as well as growing to be a hub for several corporates. Pune also welcomes several foreign tours every year due to the famous Osho Meditation Centre located here. Owing to its progressive nature, there are good hotels in Pune for unmarried couples. Treebo properties have also introduced a range of couple friendly hotels in Pune, ensuring a hassle free stay.

WHY CHOOSE A TREEBO IN PUNE

Treebo has set up a successful succession of hotels in Pune. If you’re looking for suitable hotels in Pune, choose a Treebo Hotel. They offer a selection of Acacia (Single), Oak (Standard), Maple (Deluxe), and Mahogany (Premium) category rooms, each to suit the unique needs of different travellers. Each room is well-equipped with amenities that include air-conditioning, clean beds with fresh linens, a TV with cable/DTH, and an attached bathroom complete with free branded toiletries. Choose from some of the best hotels in Pune and you will also enjoy free WiFi and a complimentary breakfast. Other on-site services and amenities provided in Treebo Hotels include timely laundry and room service, round-the-clock security, and free parking. Make sure you complete your Pune hotel booking in advance however, as hotels tend to sell out quickly, especially during peak seasons.

Best Places to Stay in Pune - When you’re looking for places to stay in Pune here's what you should take into consideration before making a choice. To stay close to some of the city’s best restaurants, pubs, and malls, staying at hotels near Senapati Bapat Road makes sense. If you’re in town for business, look for hotels in Hinjewadi . This locality is known for the popular Rajiv Gandhi Infotech Park. If shopping and sports excites you try finding hotels in Deccan Gymkhana. The locality is well known for its sports club and has a number of shopping malls, restaurants and theatres in the area. If you prefer peace and quiet, looking for hotels in Koregaon Park is a good choice. This is a prominently residential area and is ideal for casual travellers. Another good choice is to look for hotels in Chinchwad, which remains relatively untouched by urbanisation. If you are travelling to the city by train, you’ll find numerous hotels near Pune Railway Station that offer comfortable rooms at reasonable rates. If you prefer travelling by flight or need to stopover for a day or two, opt for hotels near Pune Airport.

Events in Pune - Pune is known as one of the cultural capitals of India and has its roots firmly placed in the history of the Marathas. This rich culture can be witnessed at one of the many festivals celebrated in the city. The Pune Festival is the biggest festival in the city and is held in between August and September during Ganesh Mahotsav over ten days. Many cultural shows, sports competitions and automobile rallies are put up during this time in the city. Shivaji Maharaj Jayanti is held to honour of the hero who unified the city of Pune. Many processions and colourful events are put up during this time. If you’re planning to visit the city during these festivities, make sure you complete you Pune hotel booking in advance. Other major festivals celebrated here include Ganesh Chaturthi, Navratri, Rakshabandhan, Ratha Saptami, Holi, Gudi Padwa, Deep Diwali, and Bhaubeej.

New Year in Pune New year is a time to rejoice with friends, family and loved ones. Pune offers all this fun in the form of different themed parties. Couple parties, bollywood, poolside parties, and many more are the options this city provides. Make your trip more convenient by booking your tickets for New Year Party in Pune at EventsHigh and welcome the new year with a bang.

Experiences in Pune - Pune exhibits a unique blend of traditional and contemporary cultures, with many tourist attractions attesting to its rich history. There’s plenty to see in the city, right from the Aga Khan Palace to the Shaniwar Wada war monument. The city also has a modern value is evident in its numerous pubs, resto-bars and hookah joints dotted about the city. You’ll find numerous Pune hotels near these tourist attractions if you want to spend your vacation sightseeing. To sample Pune’s local cuisine head to places like Cafe Retro, Sukanta or Kayani Bakery. If you’re craving street food head to Garden Vada Pav Centre, Dilli Chaatt Darbar, Kapila Kathi Kebab or Supreme Corner. For a bit of street shopping head to Fergusson College Road, Hong Kong Lane, Fashion Street, Bajirao Road, and Phule Market. Whether it’s a short visit or a lengthy getaway you’re looking for, Pune has a little something to offer for everyone. Go ahead and find your accommodation in Pune with Treebo and you will enjoy a unique vacation in this colonial, contemporary city. Places to Visit in Pune 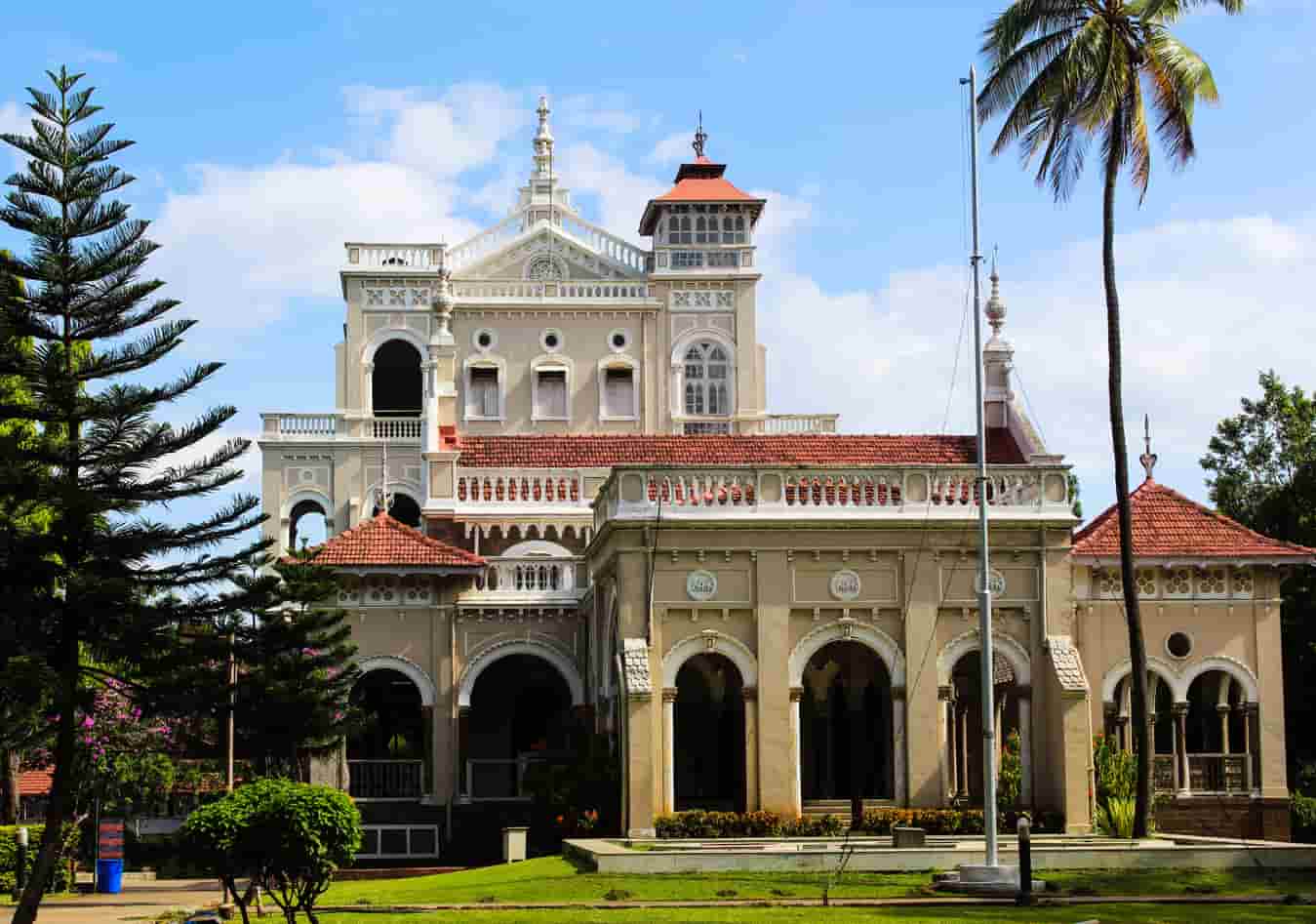 Things to do in Pune Places to Visit in Pune at Night

Review for Treebo Tryst Grand Emerald
Clean & Nice hotel
“One of top reason I like any hotel is their level of cleanliness. This is definitely one of top few. Second best thing was food quality and taste. For me it was conveniently located. Staff was good. Overall nice experience.“

-Anil Rajveer S, 30 May 2018
Review for Treebo Tryst Grand Emerald
excellent
“feels good to stay - I am staying with this hotel since 3 years, good quality of stay, good quality of food available and service is excellent with staff behaviour also. room rates are also not high!! i suggest to every one to come and experience good hospitality at this hotel in Pune.“

-YWadhwani, 9 Jan 2018
Review for Treebo Tryst Grand Emerald
Nice Property
“It was a very good experience with treebo grand emerald... I use to visit regularly to this property as am a frequent traveller to Pune... I use prefer to stay in this hotel only. This property is in good location and convenient to all aspects.“

-SantoshPattar, 21 Apr 2018
Review for Treebo Tryst Grand Emerald
Good stay at cheap price
“Room is clean. Good quality staff. Food is delicious. Breakfast menu should be upgraded. Low wifi signal. Wifi doesn&#39;t work half the time. Had a pleasant stay and would recommend this hotel for your stay.“

-mayankpas, 26 Dec 2017
Review for Treebo Tryst Grand Emerald
Very good hotel to stay..
“Rooms are very clean and tidy.Amenities are good enough.Very good and decent hotel within reasonable price. Staff are also good.Location is good and the important places are near by.Transit facilities are good.“

You can find the list of hotels near Pune railway station area here - https://www.treebo.com/hotels-near-pune-railway-station/

Do you have service apartment accommodation in Pune with all facilities?

We have good service apartments in Pune. Check them out here: https://www.treebo.com/service-apartments-in-pune/

Near Pune airport, we have several budget options for you. Check out the complete list of budget hotels here: https://www.treebo.com/hotels-near-pune-airport/

What facilities do you provide in 3 star hotels?

Treebo hotels are equipped with the best facilities at great prices. You can always be assured of a delicious complimentary breakfast, free WiFi, great room service within 30 minutes along with the other special facilities for different properties.