14 Places To Visit Near Jaipur That Will Leave You Spellbound

Jaipur is undoubtedly one of the foremost destinations in India when it comes to exploring heritage and culture. And its neighbouring cities and towns to have a lot to entice travellers. There are many places near Jaipur that are just as interesting and should be on your list of places to visit. Here are our top picks for places to visit near Jaipur.

Places Near Jaipur Within 200 kilometres 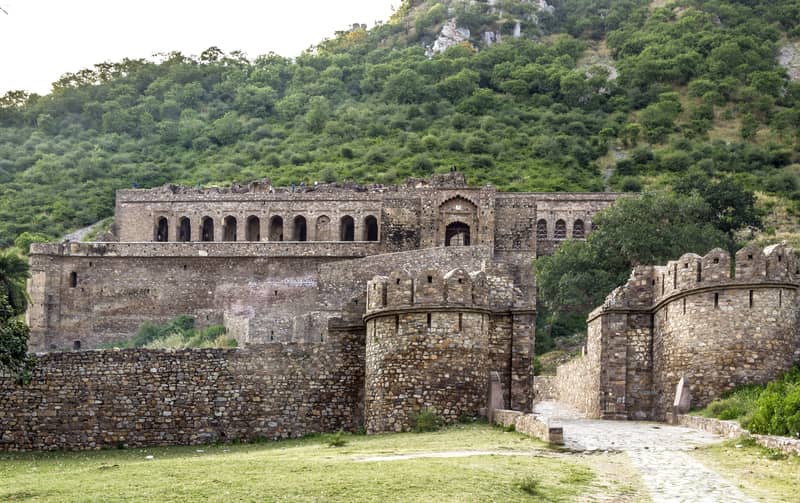 The Bhangarh Fort is located on the outskirts of Sariska Tiger Reserve in the Bhangarh Village. The fort used to be the pride of the town, but over the years it has fallen to ruins. It is now considered haunted and people are advised not to visit the fort after dark.

Many adventure enthusiasts, however, prefer to visit the fort after dark to add to the thrill of the expedition. The Gopinath Temple is another famous place to visit in Bhangarh Fort.

Suggested to Read : 14 Most Popular Places to Visit Near Jaipur 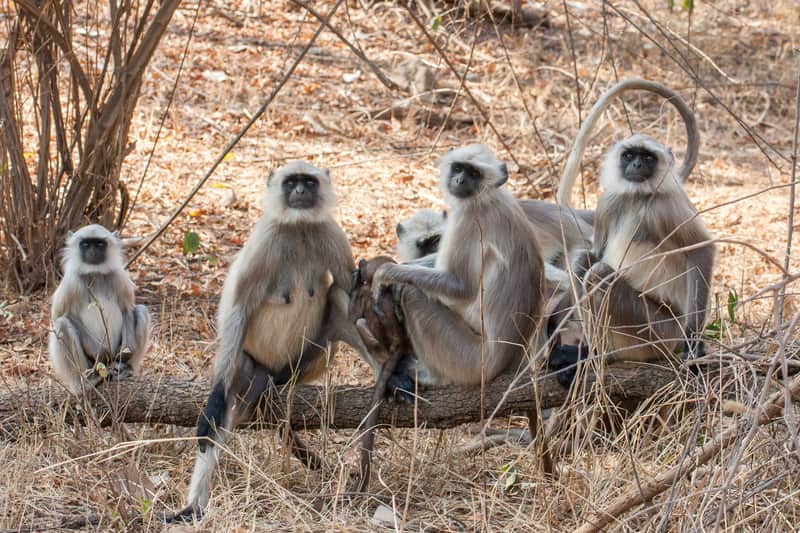 Sariska is a popular tiger reserve near Jaipur. It draws the attention of several wildlife adventurists who want to see exotic animals in their natural habitat. You can spot tigers and the grey langurs at this tiger reserve.

You can also stay back at the park in their custom-made living spaces. The best time to visit is October to March as the climate is not hot and you get to spot several animals. The well known Vijay Mandir Palace is also very close to the reserve. 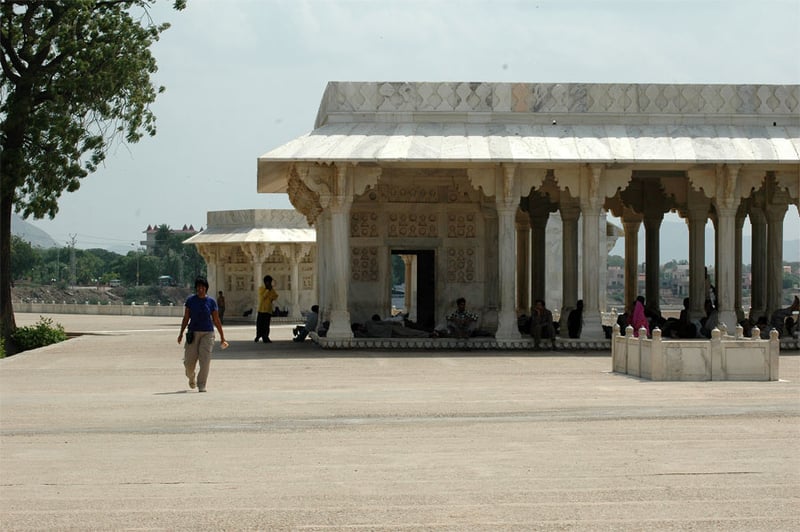 Ajmer is a holy town that receives many pilgrims every year. The town was founded in the 7th millennium by the Rajput King Prithviraj Chauhan. The city has been home to several dynasties over the years with the Mughal Dynasty being the most famous.

Here you will find several multicultural monuments and places of interests such as the Dargah Sharif Mosque that serves as the resting place of Sufi St. Khwaja Moinuddin Chisti. Ajmer is surrounded by the famous Aravali Hills, which makes for a beautiful backdrop. 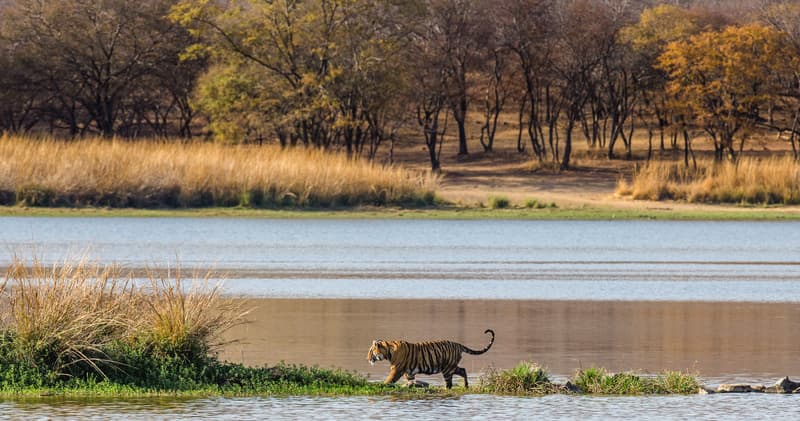 Ranthambore is famous for its age-old forts and the national park. The forts in Ranthambore were built by the Chauhan Dynasty, who ruled over Ranthambore for a considerable period of time. The lands of Ranthambore were used as hunting grounds by the kings of Jaipur.

The place can tend to get quite hot during the summers, drawing out animals to the nearby water bodies where you can spot them. If you want to spot animals, April-May is the best time. 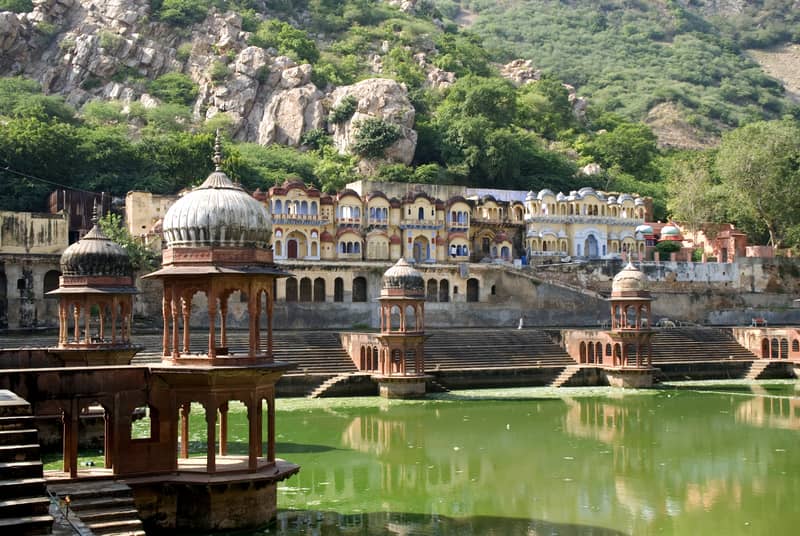 Alwar is a highly sought after weekend destination from Jaipur. The place has a rich historical background with many monuments that add to the aesthetic beauty.

There are famous monuments like the Alwar Fort, Neemrana, the City Palace and the tomb of Fateh Jang, to name a few. Alwar is also greener than most parts of Rajasthan due to it being surrounded by many water bodies.

Also Check : 11 Alluring Places to Visit Near Jaipur in One Day 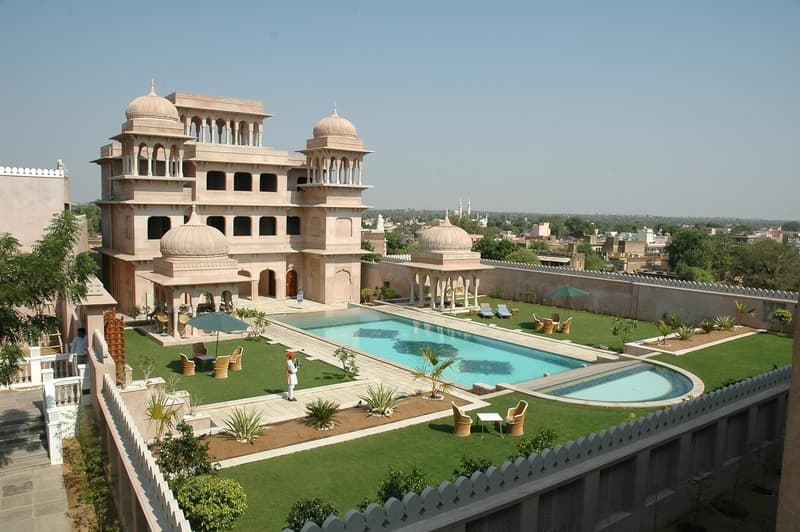 Mandawa is a small town in the Jhunjhunu District known for being a Shekhawati (Semi-Arid) region. The town was founded by Thakur Nawal Singh, who also built the famous Mandawa Fort. There is an eclectic mix of castles and havelis here.

Many of these castles have been converted into luxury heritage hotels. You can stay at these hotels and feel like royalty. Mandawa is a great place to visit if you fancy yourself as a connoisseur of art and architecture. 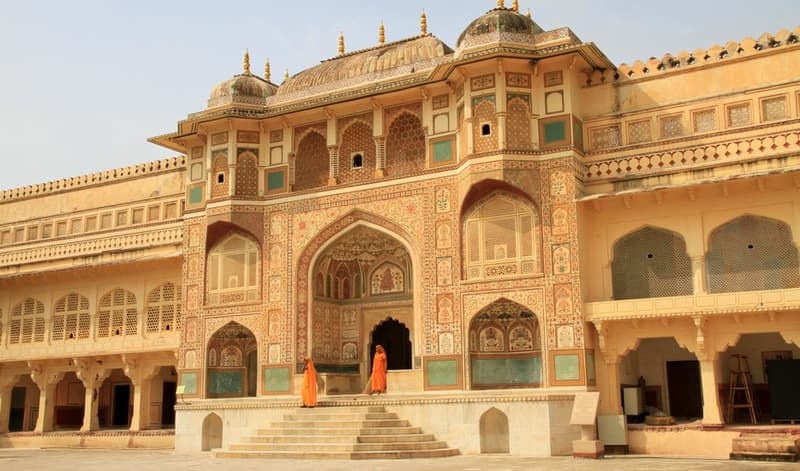 Bharatpur is located right in the heart of the golden triangle of Delhi-Agra-Jaipur. The place houses the famous Keoladeo National Park which has been declared as a world heritage site by the UNESCO.

The Keoladeo National Park sees many species of migratory birds each year and is no doubt one of the best places to go bird watching. Besides the National Park, there are other sites such as the Bharatpur Palace and the Fateh Burj you can visit when in Bharatpur

Also Read : 15 Romantic Places To Visit In Jaipur For Couples

Places to visit near Jaipur – 200+ kilometres 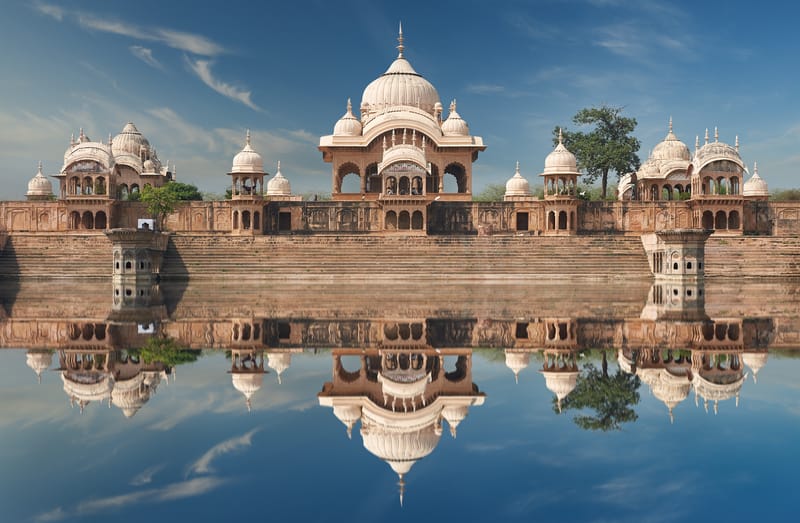 Mathur is one of seven holiest cities in India. It is famous for being the birthplace of Lord Krishna. The city is lined with temples dedicated to the god. Mathura is also known for its famous pedas – an Indian sweet.

Mathura celebrates the festival of Holi with utmost fervour. The entire city comes alive with colour and fun. Other places to visit in Mathura are the Mathura Museum, Banke Bihari Temple and the Prem Mandir. 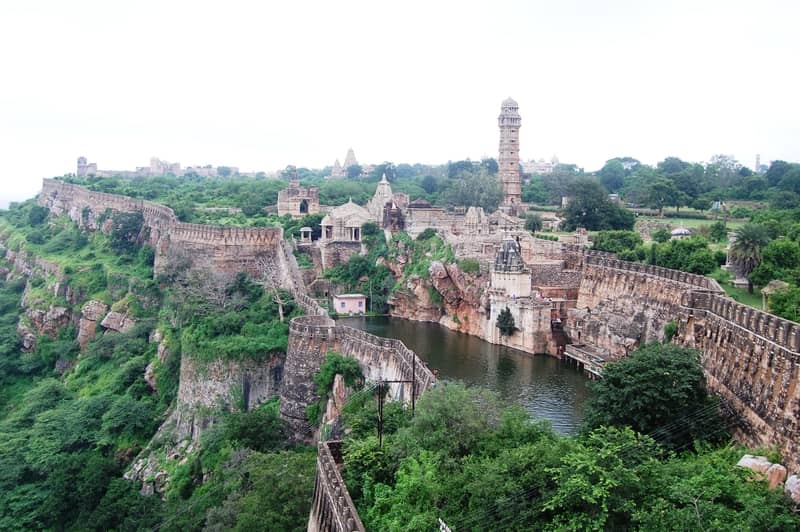 Chittorgarh has been home to some valiant warriors. It also has the famous Chittor Fort, which is the largest fort in Asia. The fort has seen major sieges by foreign invaders during its time.

In 1567, the fort was under attack and, rather than give up, the men fought to death while the women mass self-immolated themselves to avoid the shame of defeat. The best time to visit Chittorgarh is from September to March. 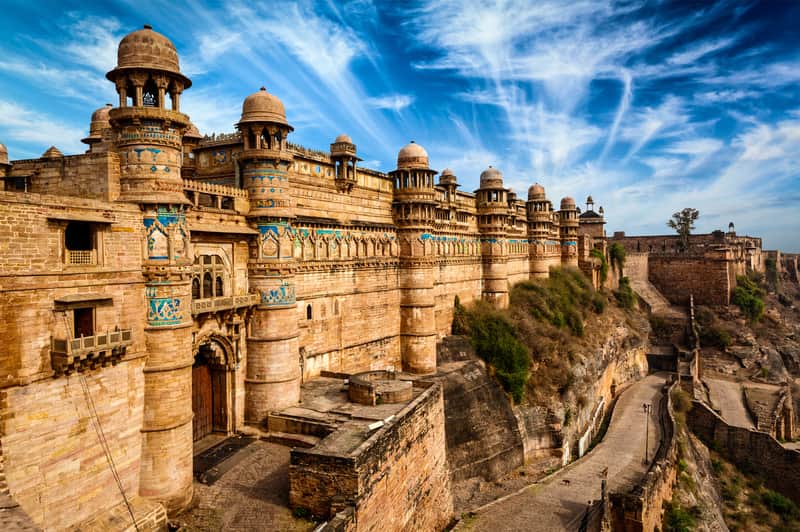 Gwalior is a major city in Madhya Pradesh. The city has seen many famous dynasties rule over it such as Kachwaha, Tomars, Scindia and the Mughals. There are several temples, forts and tombs that captivate visitors.

The samadhi (tomb) of the famous rebel leader Rani Laxmi Bai also lies here. Gwalior was an important city in the Indian rebellion of 1857 as well. After independence, the city has been a favourite with history buffs for its historical significance. 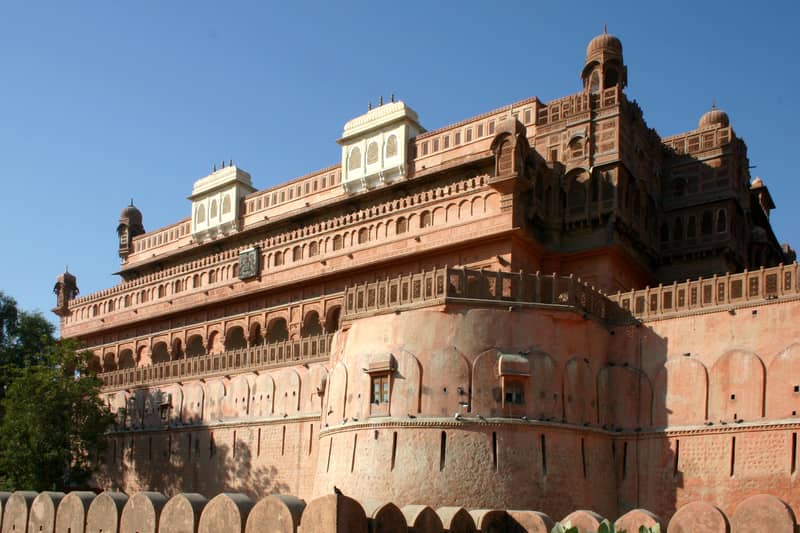 Bikaner was founded in 1488 by Rao Bika. The city is known for its famous chaat and Bikaneri namkeen. There are also a number of temples and monuments in the city that tourists can visit.

There is a famous camel safari conducted here. Bikaner has the famous rat temple which has thousands of rats that are considered to be scared. Visitors can also see the Lallgarh Palace and the Karni Mata Temple. 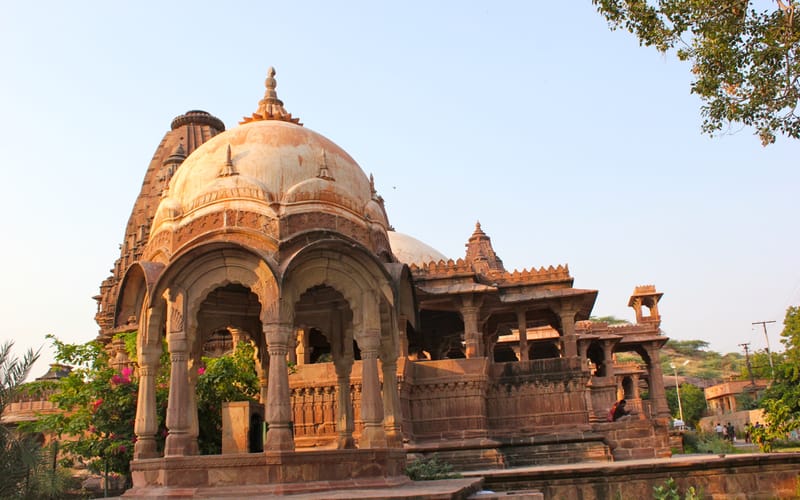 While Jaipur is the Pink City, Jodhpur is the Blue City of India. The houses and builds in the town are painted blue, which gives the entire a city’s skyline a beautiful blue hue.

The city of Jodhpur was built by Rao Jodha, who also built the surrounding Mehrangarh Fort. Mehrangarh and Umaid Bhawan Palace are the key tourist attractions of Jodhpur. The cities various forts and palaces have been featured in many Bollywood movies because of their charm and beauty.

Also Read : Exploring Jaipur: The 20 Best Places to Visit in Jaipur at Night 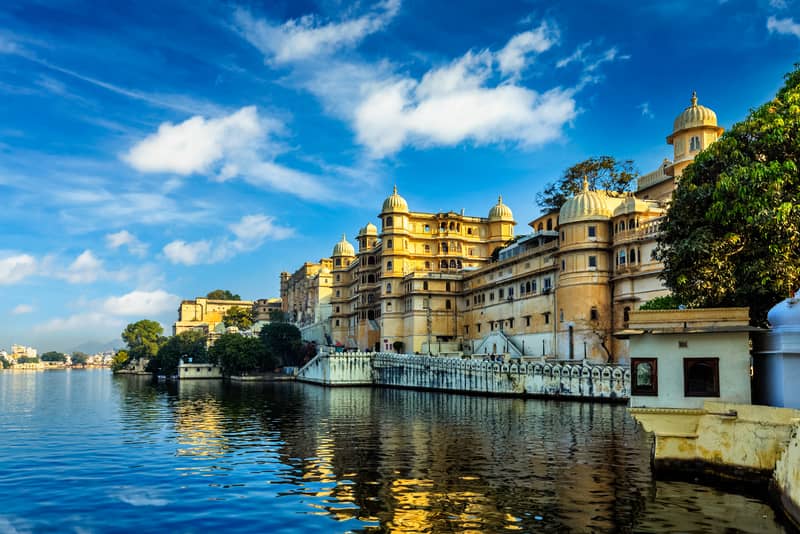 Udaipur is known as the City of Lakes and is a popular destination in India for weddings. The city was founded by Maharana Singh II and boasts of a plethora of forts and palaces that are well known all over the world. The Pichola Lake is in the heart of the city and is a major tourist attraction that offers boating facilities.

There is a cluster of islands which have beautiful palaces that you can visit. This is a perfect place to spend time with your friends and loved ones. The Udaipur Palace, Jag Mandir and Monsoon Palace are some other attractions.

Also Check : A Tourist’s Guide to the 25 Best Places to Visit in Jaipur 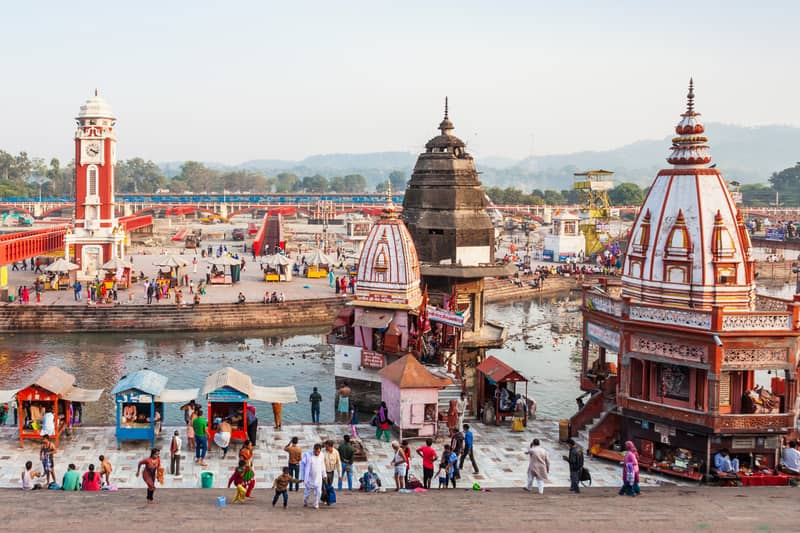 Haridwar is considered to be the gateway city to God. It is one of the most famous religious destinations in India. It gets over a million pilgrims every day. The city is one of the few in India that is located directly on the banks of the Ganga River. It is well connected by road and train. If you are looking to go to a religious destination from Jaipur, Haridwar is the place to go.

The state of Rajasthan is known for its many cities, filled with a rich historical background that will leave history buffs awestruck. Jaipur is one such city that is popular amongst tourists. However, there are hidden gems near Jaipur that we think you should visit as well.

Book Treebo hotels in jaipur for an incredible and safe stay experience.

4 Places to Shop in Nainital For Some Retail Therapy

Nainital is not only a beautiful place where you can go to enjoy the scenic views and the sight of clean waters and green slopes. As with any vacation, one ... 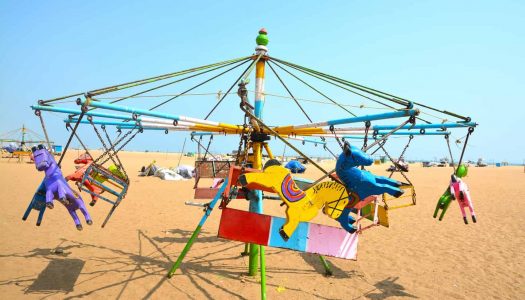 24 Super Exciting Things to do in Chennai

Chennai is a vivacious place, blessed with a rich culture and a vivid history, all this compiled together make for the beauty of this little place. But more than anything, ... 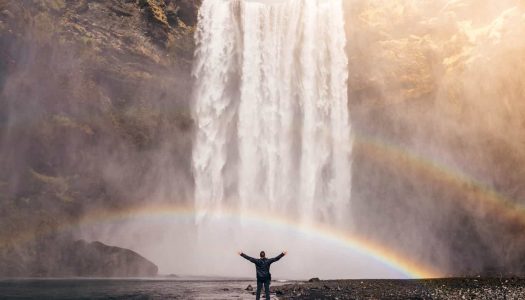 Mount Abu is a great place for a vacation. People from all over the country often make a visit, either on a holiday or a short break. While the place ... 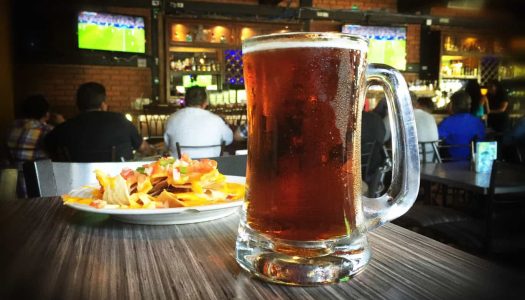 The 14 Best Sports Bars in Hyderabad

Watching your favourite sport, be it tennis, cricket or football, is not only entertaining but also a way of unwinding. Combined with a glass of beer and a few friends ... 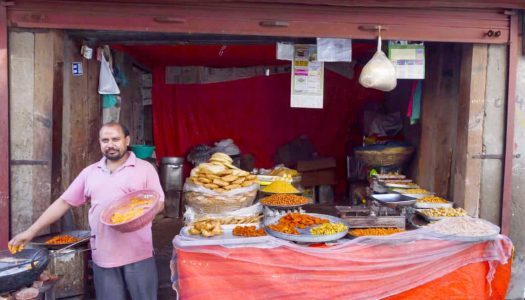 The 15 Most Delicious Food in Gulmarg

The picturesque Kashmir valley is not only a treat for the eyes but a delight for the belly, too. The Kashmiri cuisine is known for its appetizing and delicious preparations, ... 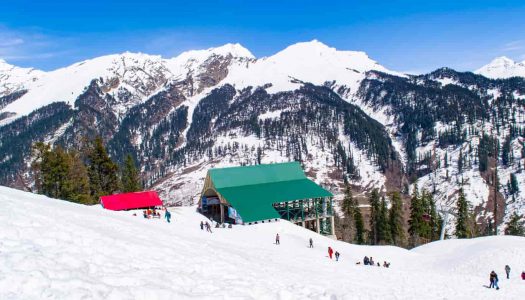 Manali is a gorgeous Himalayan hill station in Kullu Valley and an immensely sought after holiday spot in India. The hill station is well known for its snow-clad peaks in ...