Being a country blessed with several terrains and climates, the Indian Sub-continent sure has some astounding collections of natural marvels which are a sight to behold. One such natural wonder that India has is its long list of waterfalls.

Being in abundance these waterfalls are one feature that Indians truly pride in.  Though varied in terms of region, terrains, and climates that these exist in, each of these waterfalls have an undeniable charm of their own. Read on to find the elucidated versions of such astounding waterfalls in India.

25 Thrilling Waterfalls in India to Visit 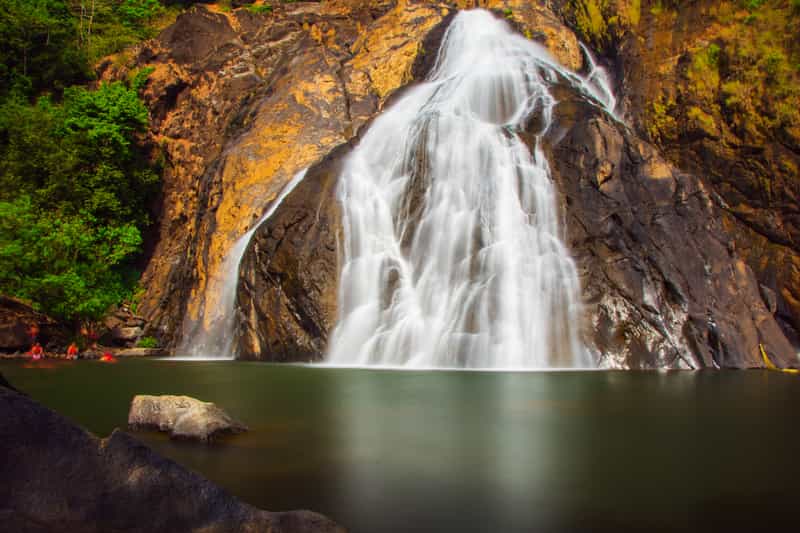 Residing in the small state of Goa, the Dudhsagar falls are surrounded by such a thick set of green that makes them both adventurous and beautiful.

Resting on the Mandovi River, these falls are among the largest in the country and gush down from a whopping height of 1017 feet. This milky water foaming all the way to the bottom has been one of the most alluring features of Goa. 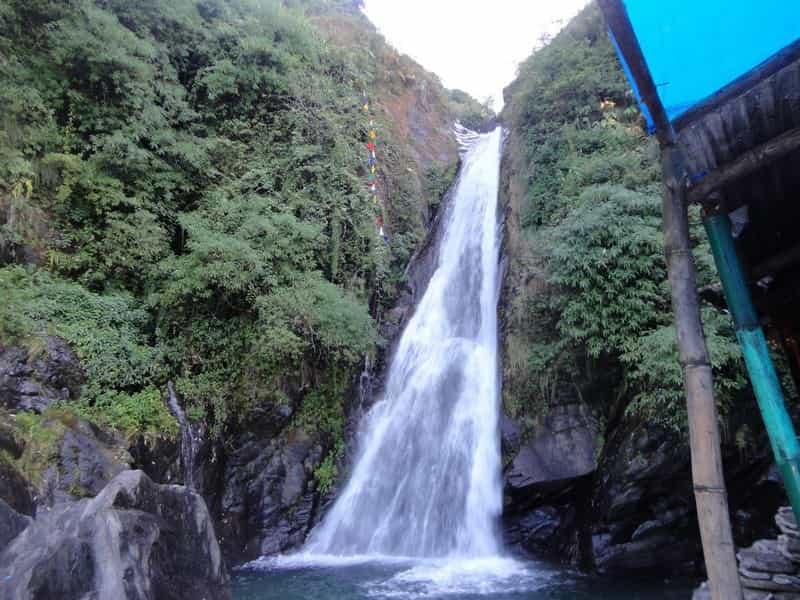 Near a famous hill station called Mcleodganj, the Bhagsu falls are a treasure that amplifies the charm of the destination. In a quaint setup, the swishing of the waters in all that you get hears when visiting the place in an offseason. Quite a highlight of the region, this waterfall has been described by some as a little paradise. 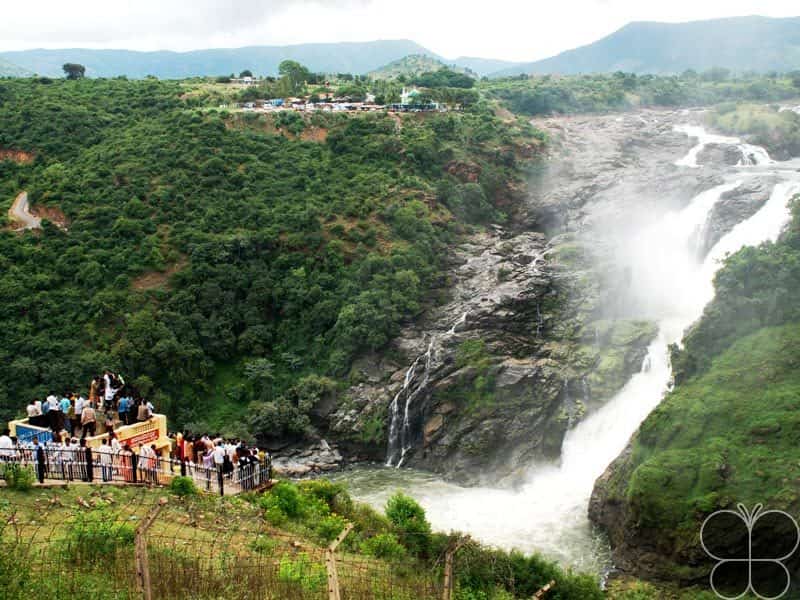 On sight, the beatific Shivanasamudra falls branch into two sections the eastern and the western. Adding to the charm of the white cascading waters of the waterfall, the dense black background of the rocks are also a sight to behold. 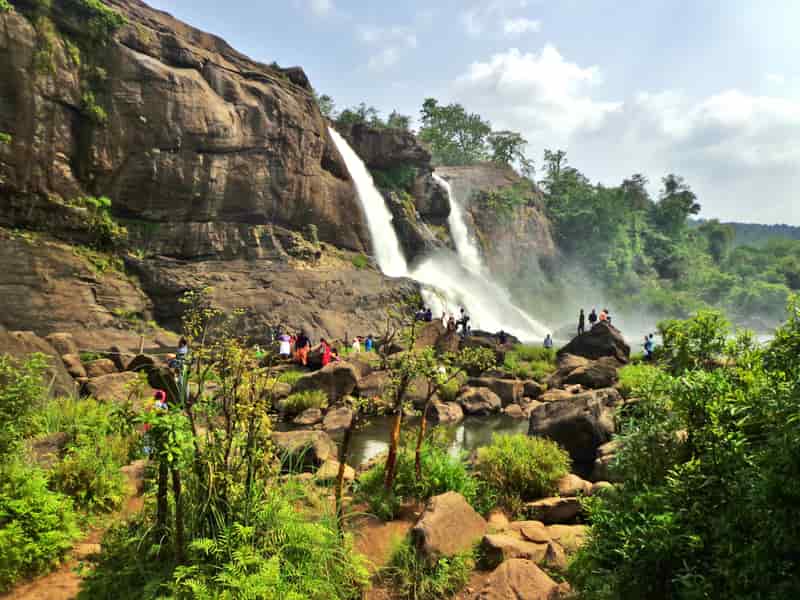 The largest falls of the state of the Athirappilly Waterfalls reside in a lush green forest. It owes to these falls that the forest is rich and diverse in terms of flora and fauna. Further, the beauty of these falls is such that has you find yourself raving about it for time beyond your visit to the place too. 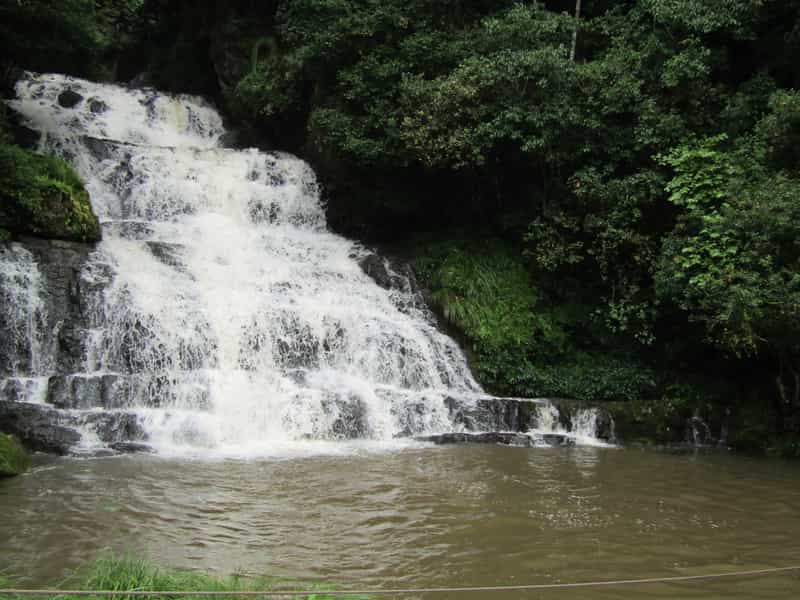 One of the most popular waterfalls of India, the Elephant falls are unique. It is the feature of these falls to be quite the adventure spot of the state that makes them distinguished and charismatic. Being one of the most thronged tourist places in Shillong, these falls are divided into three sections which pour out in a sequence. 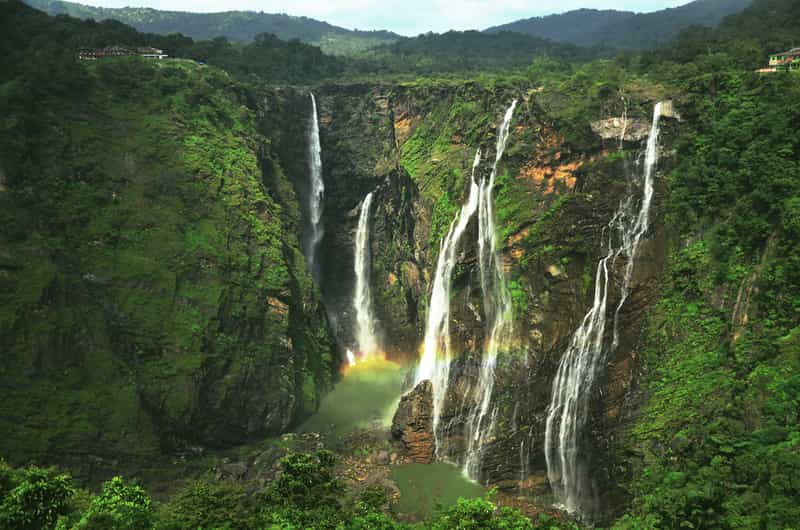 The tallest untiered waterfall in India, the Jog Falls in Shimoga is a sight to behold. Flowing out in complete vigor and enigma, these falls make for an exceptional trekking spot too.

It is not only the trek that makes these places such but the chance to plunge into the water at the base that makes these falls into one of the most enthralling experiences one can venture into. 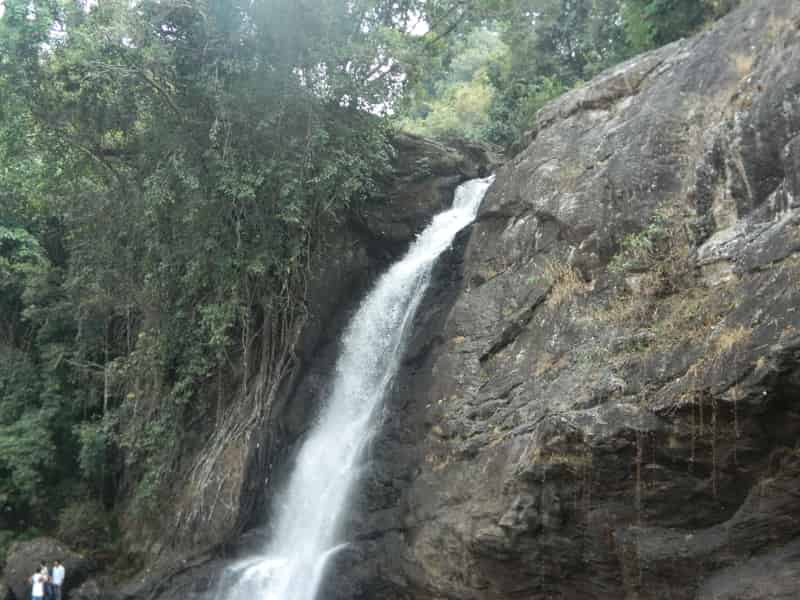 Another of the astounding cascades of Kerala; the Soochipara Falls also go by the name Sentinel Rock Waterfalls.

The blissful charm of these waterfalls has made them one of the most thrilling and adventurous spots in the area. Giving out the setup of rock climbing, trekking, and simple picnicking, this place is quite the hangout spot.

Being the most rained place in India, Cherrapunji had to have an astounding waterfall to boast of and so it has.

The Nohkalikai falls are known to splash hard on to the rocks atheist 335 meters below their inception point. The commendable landscape of these falls makes them a picturesque view from a distance. 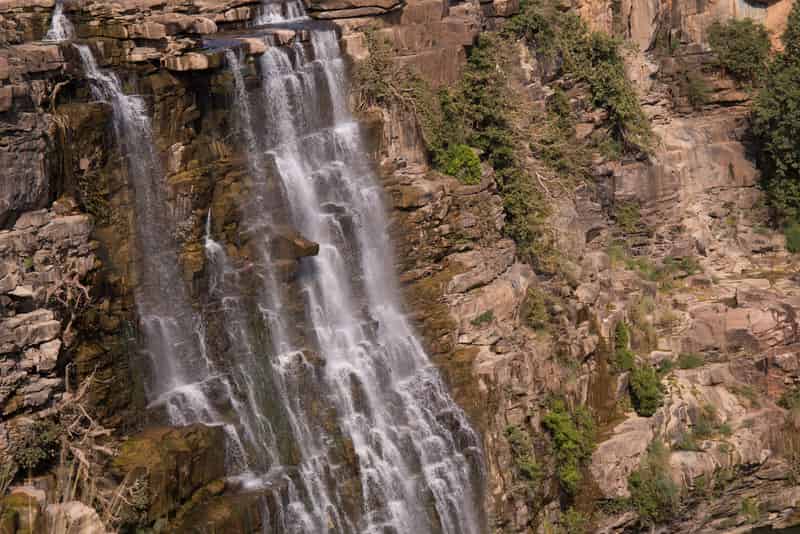 An oasis in the middle of a dessert, yet no less flourishing, the Bhimlat Waterfalls are known to dissect right through the stereotypical image of the state of Rajasthan. Being right at the heart of the sand covered desserts; these waterfalls are the source of respite during the smoldering summers. 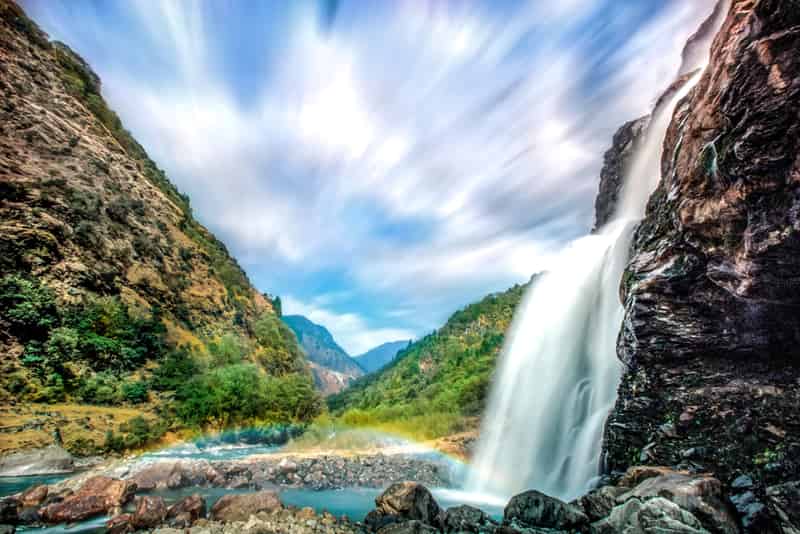 One of the not so thronged on wonders of nature, the Nuranang falls are untamed and un-commercialized. Being situated in as scenic as surrounding as Tawang itself makes them alluring enough, but the beauty of these falls is what makes a visit to the place of sheer bliss. 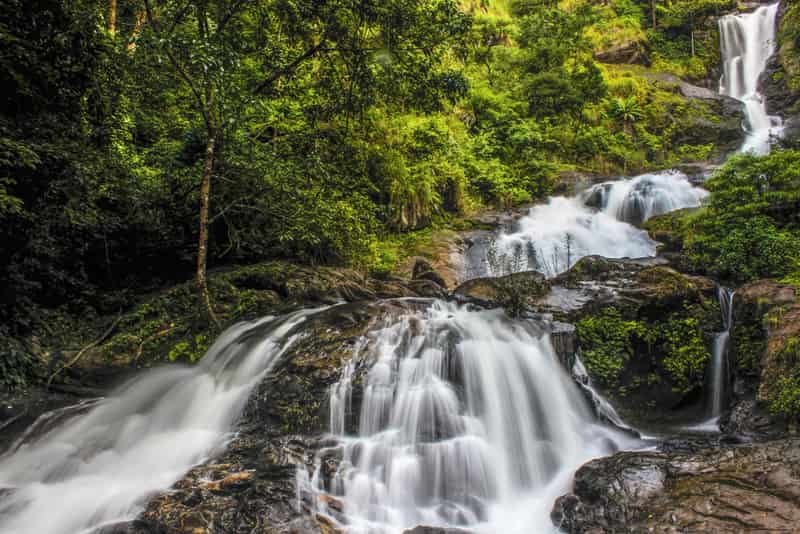 The Kashmir of the south also has a commendable cascade to boast off. The Iruppu falls are they are referred to, are one of the best sights in Coorg. Within the quaint set up of the hills, this place sure has increased the charm of the place which in itself is inexplicably beautiful. 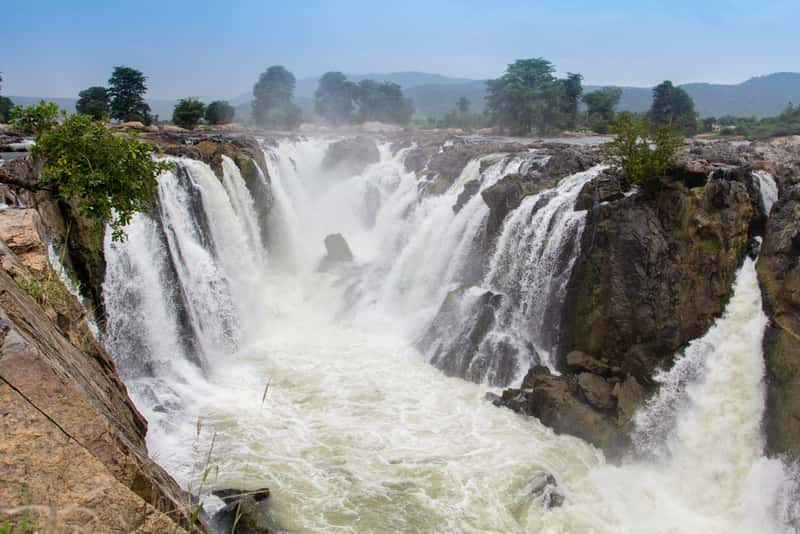 If the world has Niagara, India has Hogenakkal in Tamil Nadu. Just the simple stature of these falls in comparison with the great Niagara Falls says enough about the beauty of their cascade. Owing to such spectacular finesse of flowing water, this waterfall is among the hippest tourist spots in the state. 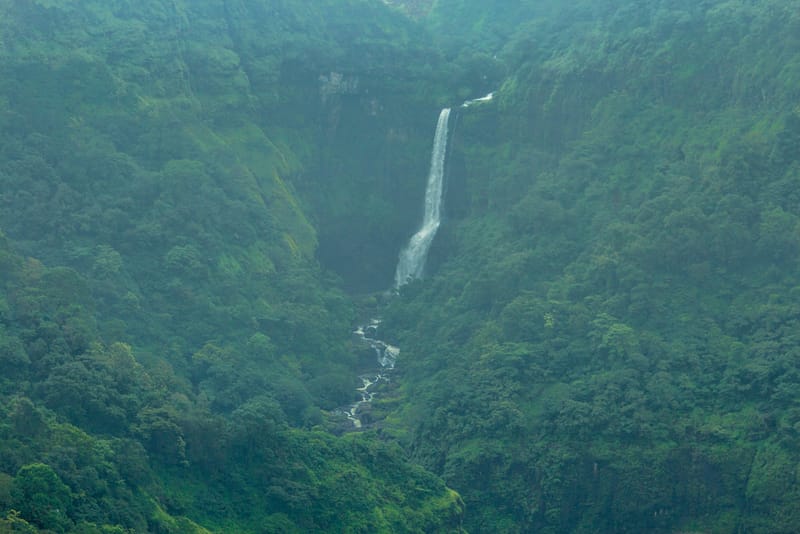 Lonavala- Khandala in themselves are known to be the prime beauty of the state of Maharashtra, and the waterfall among such a picturesque setting is just the apt fit.

The 3 tiered waterfall of Kune is as tall as 200 feet and it is the distinguished grace with which these falls pour out, that they have quite a name among the hefty list of waterfalls in India. 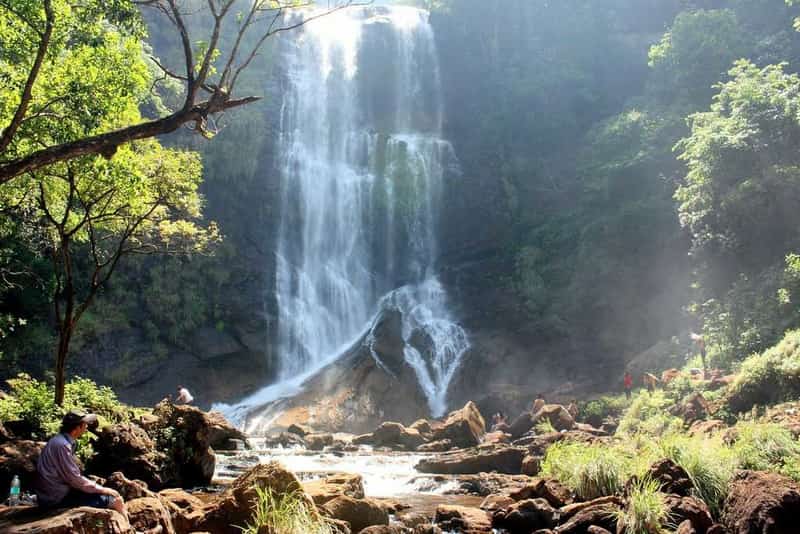 With a set up as that of right from a postcard, the Hebbe Falls is a sight so surreally beautiful that it becomes the happy place for quite a few who visit it in its sheer tranquility and peace.

If the waterfalls is a sight, then the vegetation around the scene also plays its role in adding its charm to the place. Lush green thick surroundings of the waterfall make the spot one of the best tourist spots in Karnataka. 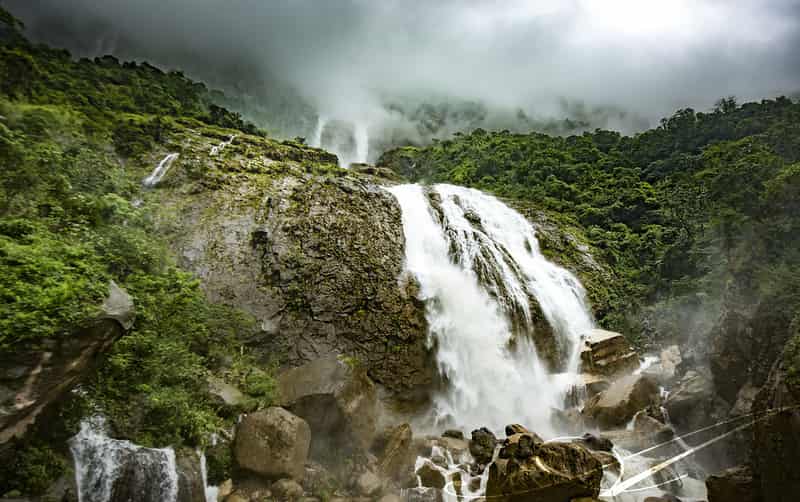 The Kynrem Falls of Meghalaya is like the sight that from a distance appears to be the trickling roar of nature. It is the grace of the fall that makes them so astoundingly idyllic. At least a complete day of outing is required to take in the stunning sight of these falls. 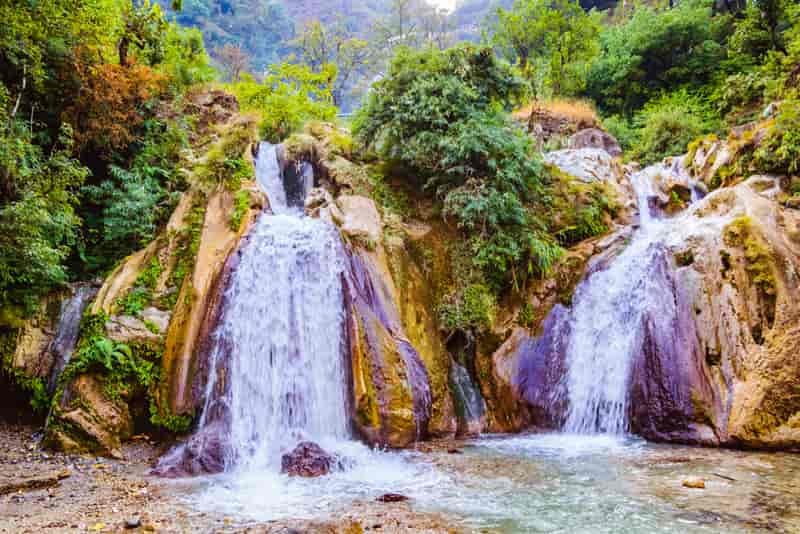 More of the tourist spot that any other falls across the country, the Kempty falls are nestled in one of the most amazing hill stations of India, Mussoorie.

The silvery white swishing waters of these falls are known to attract quite a tourist footfall. Now coming with a more developed set around the place, these falls are a sight during any season. 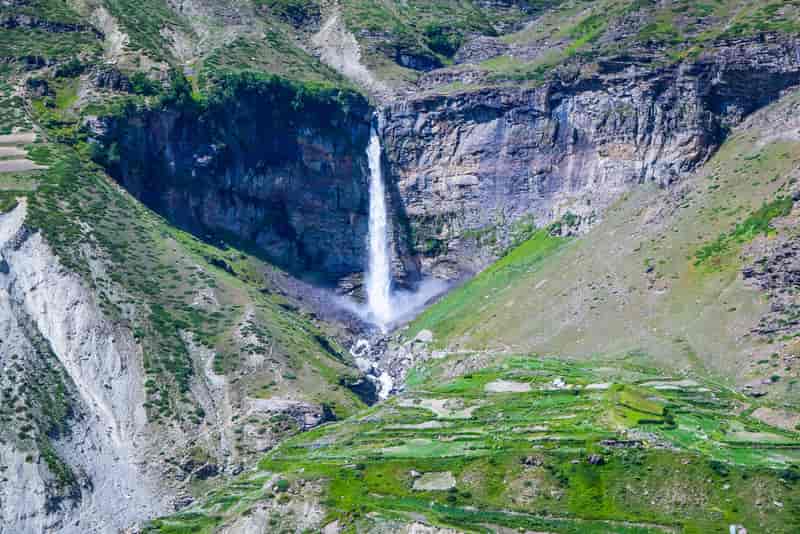 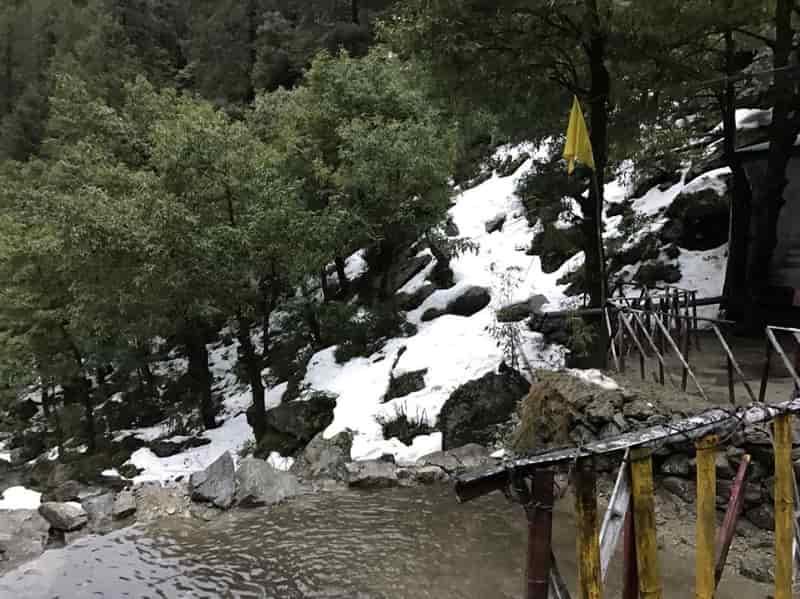 A haven for nature enthusiasts, the Satdhara falls aren’t just the ordinary or average waterfall. Rather even on the face of it, these falls seem to be a wonderful fusion of seven different streams. A magical sight, these falls surely are one of the best waterfalls in India. 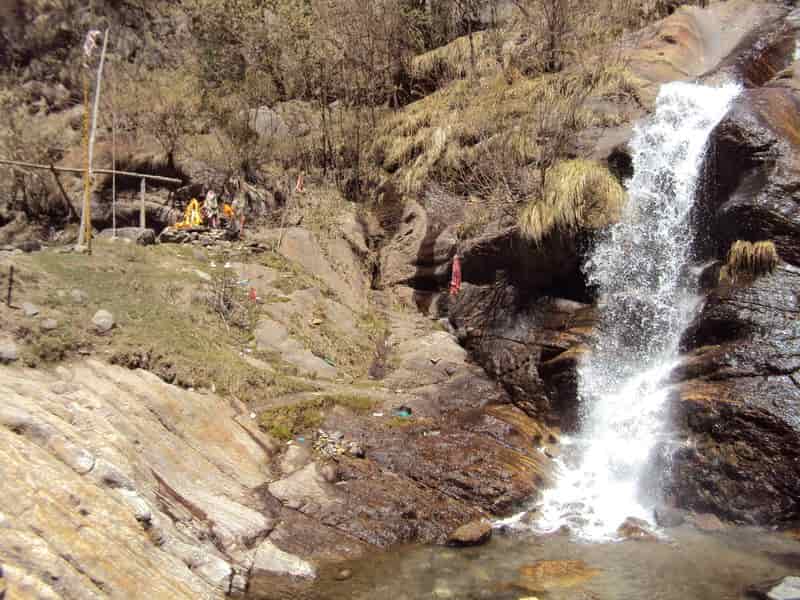 When talking of the most beautiful waterfalls of India, the name of Rudra Nag in Himachal Pradesh unequivocally pops up. Along one of the best treks of the country, the Kheerganga trek, this waterfall is a place hard to leave once bought into the vision.

The falls solely are pointed out to be the most spectacular feature of the trek and that itself talks of how amazing these waterfalls are.

A simple distance of 30 kms from Jabalpur in the Bhedaghat district of Madhya Pradesh, the Dhuandhar falls reside. This unique name has been given to these falls for the smoky cascade that they result in. It is during the dry season that these falls are best visible as it is then that the unique crevasses of these falls can be examined. 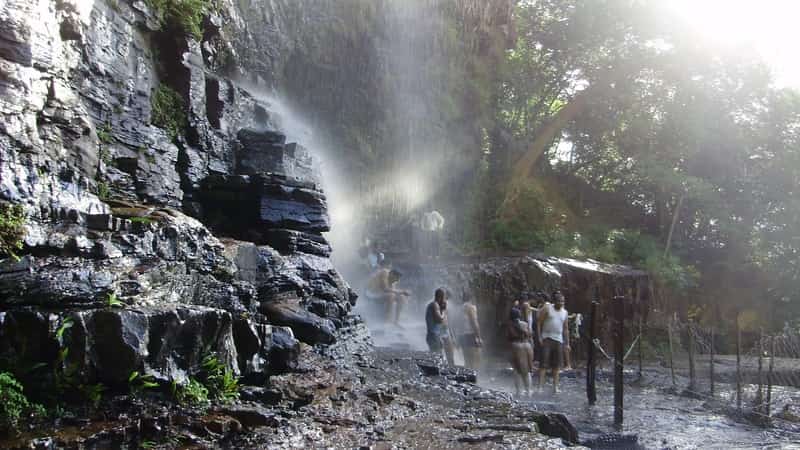 Swishing down from an impressive height of 27metres, the Talakona falls has a tinge of spirituality to its name.  It is the location of the Lord Siddheshwara Swami Temple near the falls that has made these waterfalls so famous. Adding to the beauty of these falls, this place is the hub for wildflowers and butterflies too. 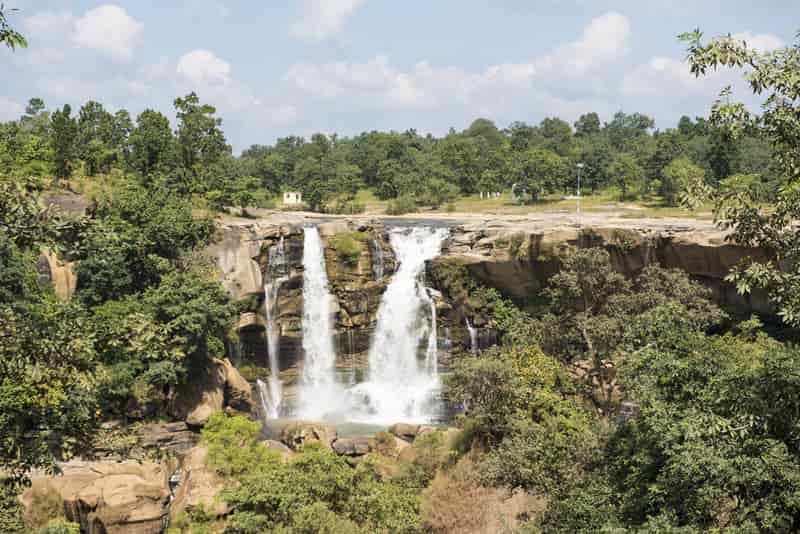 The raging show that these falls put forth during the monsoon season makes these falls one of the top waterfalls in India. But it not only the rainy season in which the Amritdhara waterfall is a sight rather it is an all year round treat owing to the thick lush green surroundings of the waterfall. 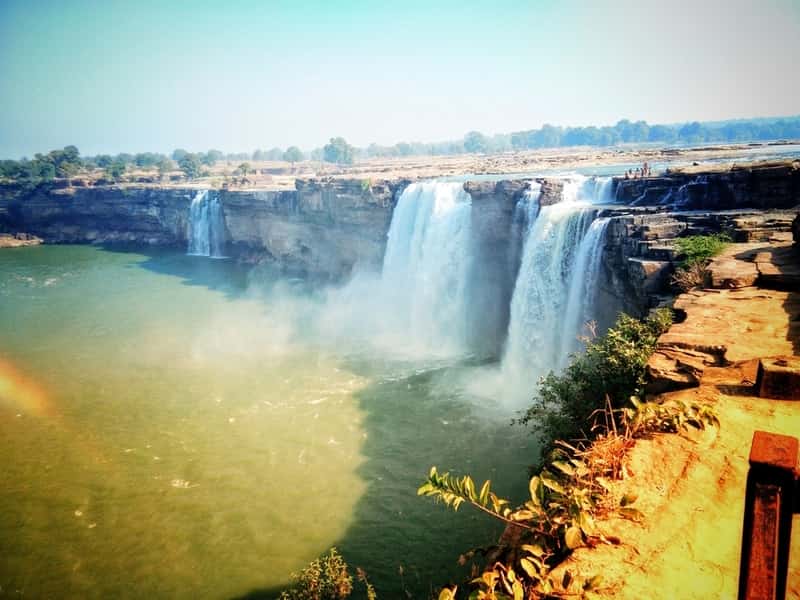 Though measuring up only till the height of 29 meters, the Chitrakoot Falls to make the list of top waterfalls in India due to their astounding girth. Luring in tourists that range in thousands each year, these falls are best viewed during the rainy season. 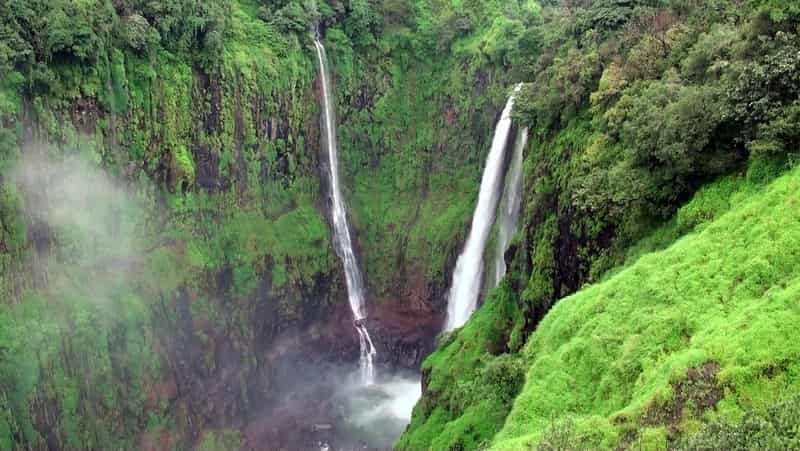 Proving to be a respite for the bustling people of Mumbai, the Thoseghar Falls come with surroundings that are as spectacular as the falls themselves. It is owing to such beauty of the cascade and its set up that these falls have attained the stature of being the pride of the Western Ghats. 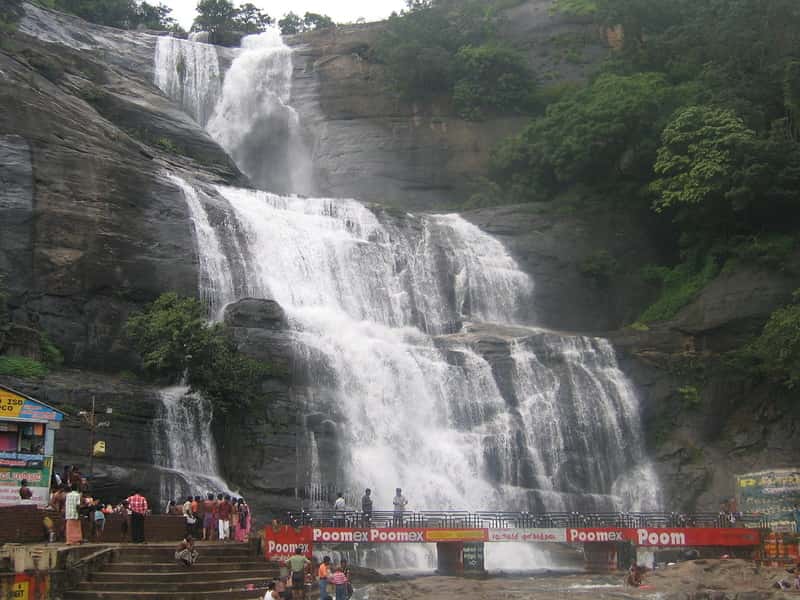 Located within a small panchayat town, the Courtallam Falls measure up to a height of 160 meters. This continuous set of waterfall originated from the Chittar River in the Western Ghats. The stunning view of these falls stays undiminished through the year but it is true in the rainy season that the roar of the water can be heard from kilometers away.

The varied description of some of the most beautiful waterfalls in India must have your interests piqued with regard to the multiples boons that this country has been bestowed with, but to truly witness the magic of these waterfalls one must do it firsthand.

Once the sight of these waterfalls has been seen, it is only then that their beauty can completely be comprehended, visit them and share your experiences with us in the comments section below. 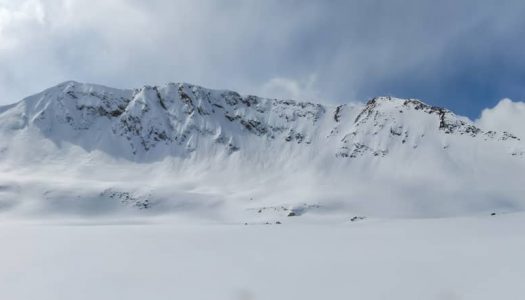 16 Amazing Places for Snow In India

India is geographically such a diverse nation that from North to South we have so much variation not only in culture and cuisine but also naturally and meteorologically. However, ... 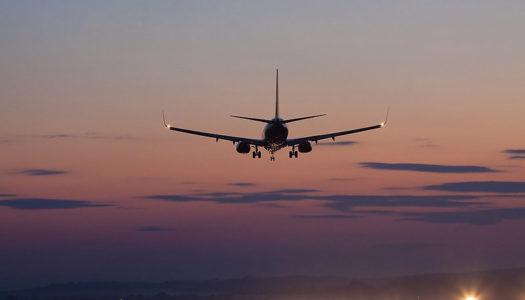 If you love travelling via flights, you sure must have visited several airports in India. Indian airports are known for their innovative design, numerous amenities and the unique art and ... 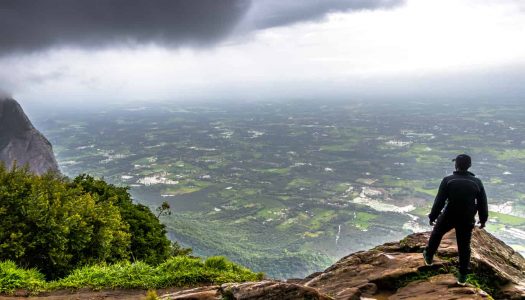 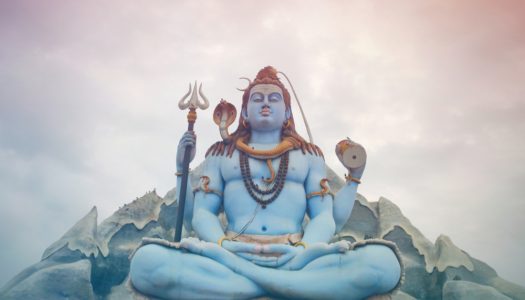 Maha Shivratri 2020 is around the corner (21st February 2020), and we know that almost every state in India has a temple dedicated to the Lord. Shiva is ... 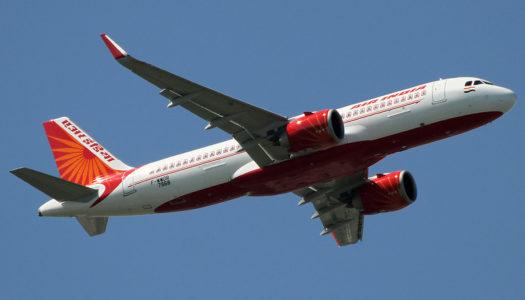 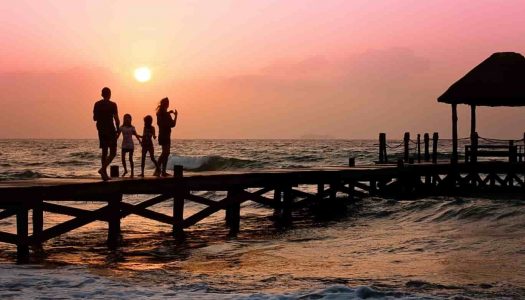 Vacations are a means to unwind and take a break from the monotony of daily routines. They are also a very good means of reconnecting with yourself as well your ...