Varanasi’s claim to being the oldest city in the world may still be undecided, but there is no doubt whatsoever that this city is known to every Hindu in the world as a place they must visit at least once in their lives.

A dip in the Ganga here is supposed to cleanse one of all their sins of omission and commission, even in their past lives. This holiest of cities is always bustling with the millions of visitors who come out of faith or mere curiosity. Let’s discuss the top things to do in Varanasi.

Top Things to Do in Varanasi 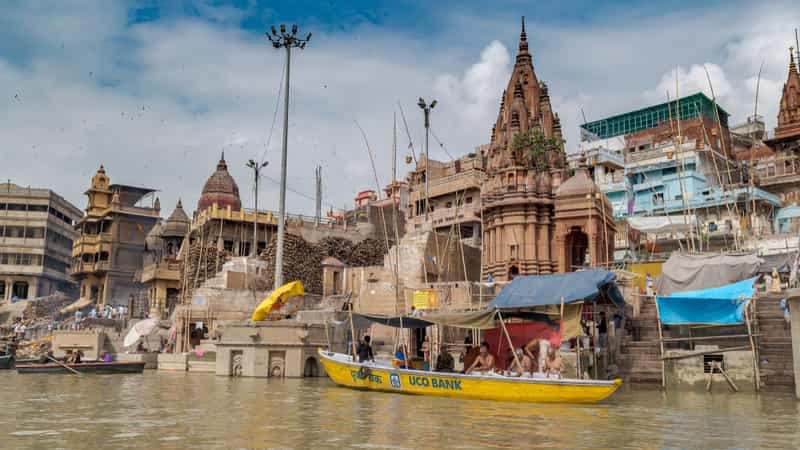 A Temple in Varanasi

The city has an extremely rich Hindu tradition and a temple to one or the other Hindu God on every street. The top things to do in Varanasi is visiting the most revered of them, the gold-plated Kashi Vishwanath Temple. Replete with history and mythology, this 18th century temple is the most coveted destination of all the pilgrims headed here. The Nagara style temple to Swayambhu Durga is also most revered. Other popular temples are to Sankat Mochan Hanuman, Annapurnadevi and Kalabhairav. A seer taking a dip in the Ganga

You could take a dip yourself. The 84 Ghats lining the banks of the holy Ganga facilitate the inevitable dip which is considered mandatory by the faithful wishing for liberation from the cycle of birth and death. They also enable offerings of prayers to the river using flowers, lamps and floating lights or diyas – making Varanasi a city of lights. Pandits wait here to offer all kinds of services like prayers for the souls of the departed. 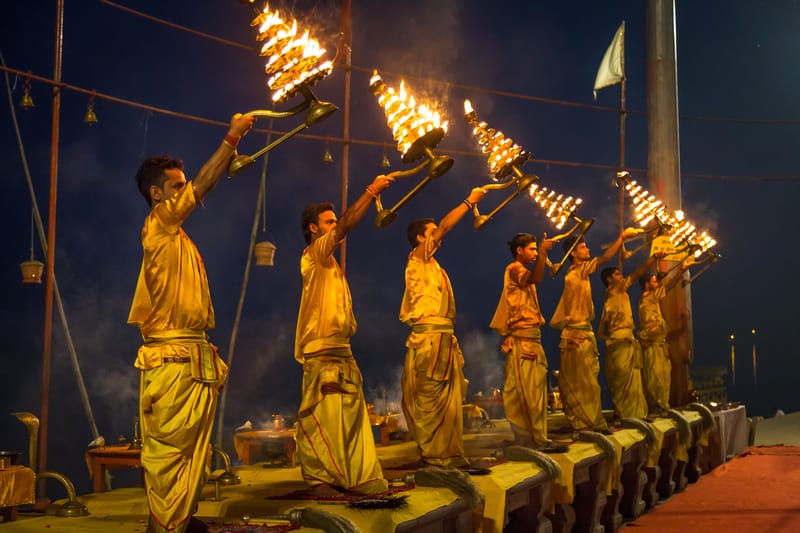 Ganga’s purification powers influence the Hindu belief system, ascribing a Godly status to the river. Claim your place early at the Dashashwamedh Ghat or get close on a boat. See the cleaning of the brass lamps in preparation for the Aarti, a Hindu custom of lighting a lamp in worship, to the river. This 45-minute ceremony happens every evening amidst Vedic chants and the prayers of all the pilgrims. An unforgettable experience and one of the best things to do, you’ll agree. 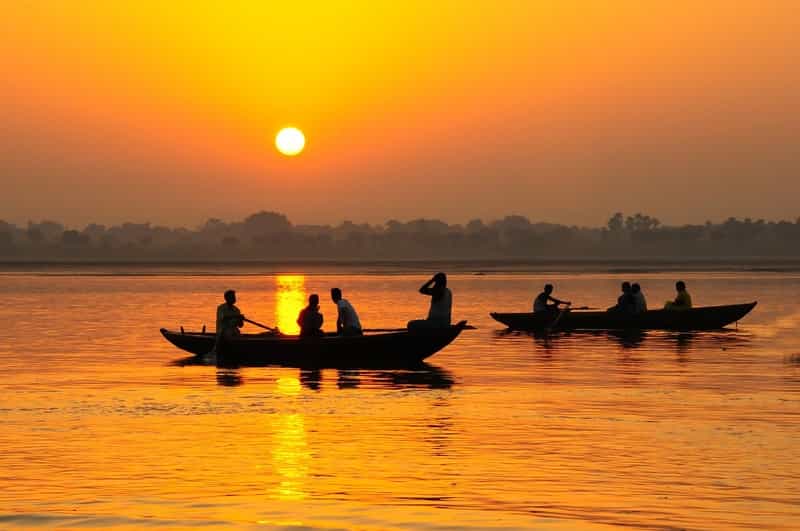 Boating in the Ganga

One of the best things to do in Varanasi is going boating on the Ganga to enjoy the spiritual ambience of the city and a panoramic view of its palaces and the devotion of pilgrims engaged in various ceremonies on its banks. Try an early morning trip to enjoy the reverent, ritualistic atmosphere, the Sadhus and the Sanyasis, who are an essential part of this spiritual city’s magic and mystery. 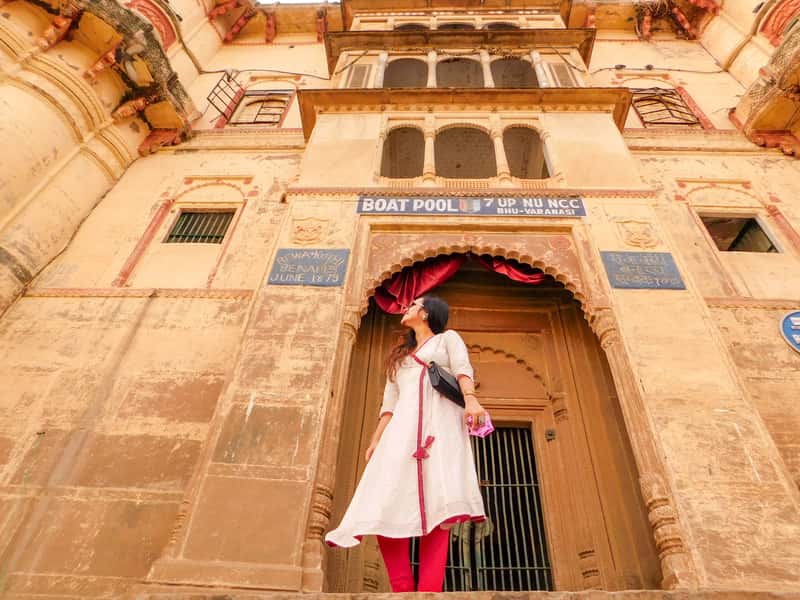 Don’t miss the enchantment of the city’s unique charm and ambience of the ghats by zipping around the place in automobiles. Walk around the Ghats and observe the unique spiritual fervor of a place like Varanasi where the living come to pray for their own souls, and those of their departed. If constrained for time, watch the Agni Puja at the Dashashwamedh Ghat, where Brahma sacrificed ten horses in a Yajna or visit the Assi Ghat.

6. Delve into the Area’s History 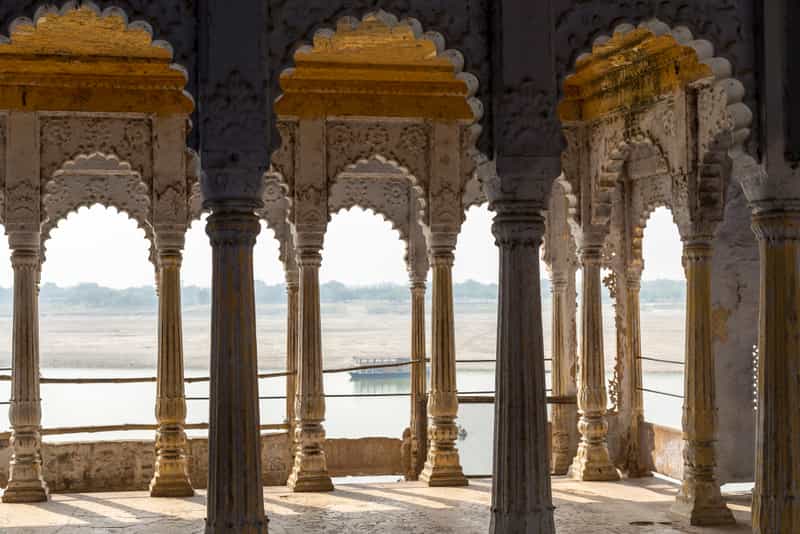 A Decorative Balcony at a Varanasi Temple

Build with cream-coloured sandstone, the Ramnagar Fort is built in the Mughal style of architecture in 1750. It stands strong against time, with its carved balconies, pavilions and open courtyards and continues to house the royal family even though such titles have been abolished in 1971. Top things to do include visiting the fort’s museum to see an armoury with guns and swords, ivory carvings, elephant saddles and palanquins of gold and silver. 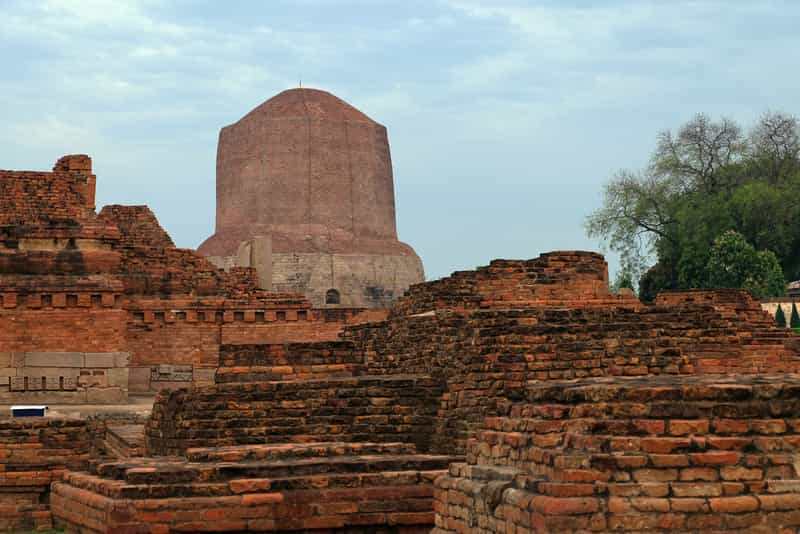 Replicating the pattern of a Buddhist Vihara or monastery, the Sarnath Museum has a main chapel as its central hall and monastic cells as galleries. Many Buddhists visit the four places associated with his birth, enlightenment, preaching and nirvana, namely Lumbini, Bodhgaya, Sarnath and Kusinagara; while Jains believe it to be the site of the asceticism and death of the eleventh Tirthankara, Sreyansantha. Visiting these spots is among the best things to do in Varanasi. Everyone has ancestors whom they may or may not have met. Hindus believe in praying for their ancestors going back by at least 7 generations. Anyone who subscribes to this belief and culture has a really unique opportunity to pray for the souls of their ancestors or perform their last rites, seeking salvation for their souls. You can visit the Manikarnika Ghat to see the world’s largest cremation ground and see many people performing such last rites.

9. Get a Refresher Course on the Ramayana 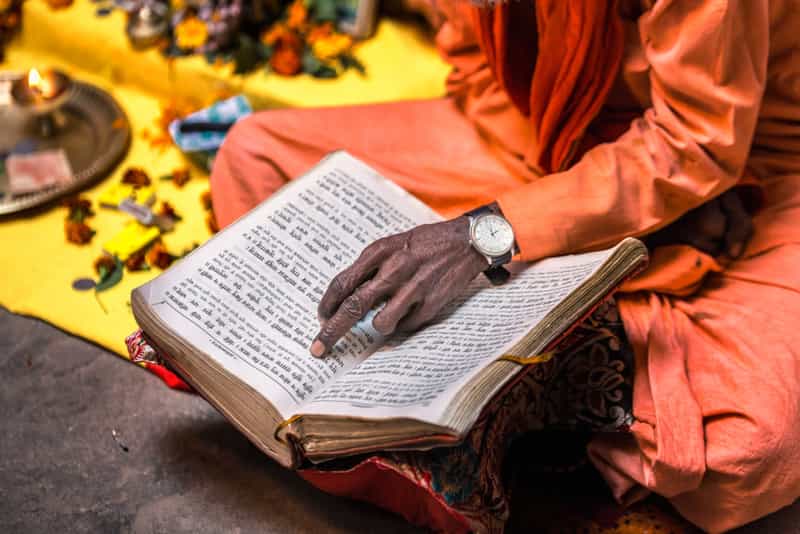 Learn about the Ramayana

The Hindu Religion is intricately woven into the tapestry of Varanasi. In this Shiva pilgrim centre, you get to visit a temple dedicated to the Ramayana too. Visiting the Tulsi Manas Temple at Varanasi, with the entire Ramayana inscribed on its marble frescoes, is among the top things to do at Varanasi. Visit the place where Sant Tulsi Das actually penned his Ramcharit Manas at the Tulsi Ghat and see the original manuscript of the book.

Bharat Kala Bhavan at the BHU

The Bharat Kala Bhavan is located in the Banaras Hindu University established by Pandit Madan Mohan Malaviya. The museum houses more than 100,000 artifacts and exhibits showcasing the paintings, textiles, costumes and decorative arts. The collection of Indian paintings and miniature paintings here is considered priceless and the museum is renowned for its unique, aesthetically beautiful and historically important items; making it one of the top things to do at Varanasi. 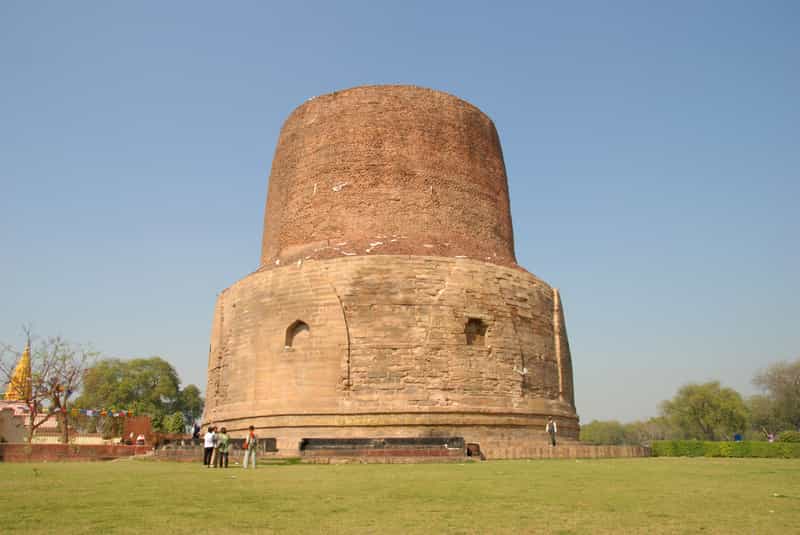 Varanasi is very close to Sarnath, a Buddhist centre in the times of Ashoka. This place is renowned as the location where the Buddha attained enlightenment. See the inscriptions, crumbling stupas and manuscripts of the times here. The beautiful Chaukhandi Stupa and the Dhammek Stupa which is 28 meters in diameter and has a height of 43.6 meters are worth seeing. Don’t miss the Mulagandha Kuti Vihar, painted with beautiful Japanese frescoes. 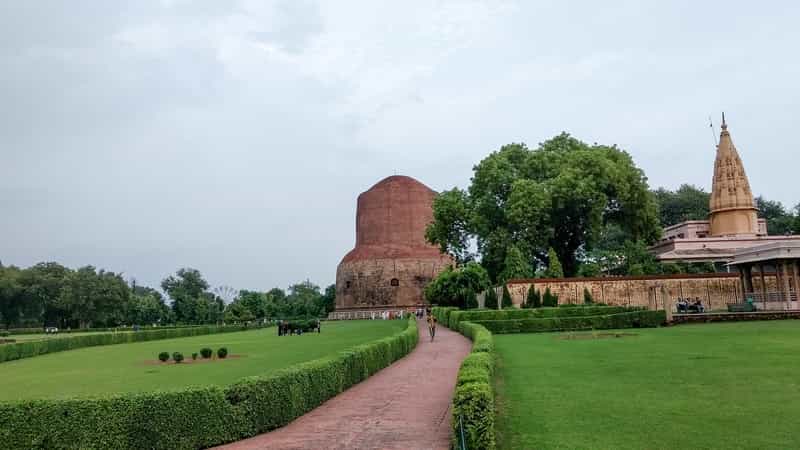 The diverse culture of India is embodied even at its oldest city, Varanasi. The proof lies in the existence of nearly 1400 Buddhist, Jain and Sikh temples along with mosques and churches in this city. Prominent among these are the Alamgir Masjid, Gyanvapi Mosque, St. Mary’s Church, Nepali Mandir and the Tibetan and Japanese temples. While the Nepali temple also worships Shiva, the Tibetan and Japanese Horinji temples pay obeisance to Buddha. 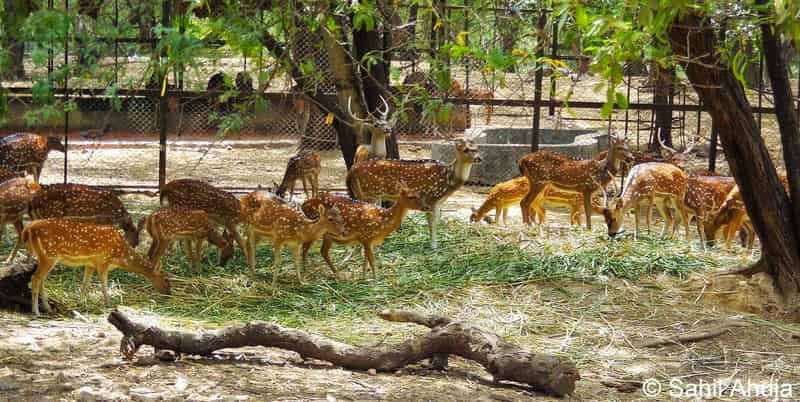 The deer park at Varanasi is at the place where Buddha taught his first sermon and proclaimed his Dharma and created the original Sangha; all of which are held especially sacred by Buddhists. This deer park was first established by a Jataka King of Varanasi in 528 BC, according to the Chinese Monk Huien Tsang. This heavenly park has deer roaming it freely and a huge variety of birds. 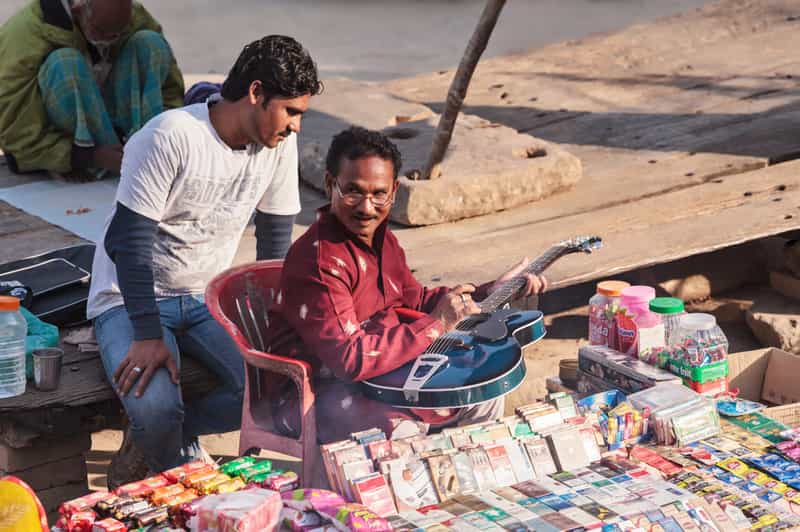 A roadside vendor in Varanasi

When you are here, visit Mehdiganj to observe the city’s present day lifestyle and to see if you would want the beautiful silk sarees of Varanasi (anglicized version: Benares), which are highly coveted for the quality of workmanship which goes into the floral motifs woven with golden thread into them. You can also pick up ornate jewellery, shawls, carpets, bangles and stone inlay work.

15. Cross the Ganga via the Malviya Bridge

This double decker bridge was inaugurated in 1887 and is one of the major bridges across the river Ganges. Carrying rail track on its lower deck and a road which carries India’s Grand Trunk Road across the river, this bridge stretches 1048 meters and was originally called the Dufferin Bridge, to be re-named in 1948. Enjoying the panoramic views of the river and the city from here is among the top things to do.

Apart from these, you may see the thousands of people who come to the Kashi Labh Mukti Bhawan, and wait to breathe their last at this sacred place; or meet Aghoras whose worship of Lord Shiva takes a different and dark turn.
If you happen to be a people person, you may ask any of the pilgrims for their unique reasons for taking a trip to Varanasi. If you have any questions regarding Varanasi or things to do there, do let us know in the comments.

The aroma of divinity, the continuous chanting of Mantra, the environment bathed in religious passion, the temple bells and arti echoes at dawn all captivate the spirit. This is the ...

Vacations are the first thing that comes to mind when one hears the word “summer.” Despite the blistering heat in most parts of the country, there are plethora of Indian ... You’re never too old for a snowball fight! Experience the beauty of dreamy lands during the best time of the year! We all enjoy winter, curling up in a blanket, ...

Varanasi or Banaras, as it was earlier known, is a renowned tourist destination which draws people from all over the world. The pulsating culture, the overwhelming ghats of Ganga, the ...