14 Famous Temples In Mumbai To Rejuvenate Your Spirit

Mumbai is the economic capital of India. The city is fast-paced, and even a year may seem like a passing moment. However, the city comes to a standstill when it comes to celebrating the various Hindu festivals, from Diwali to Ganpati to Holi. Mumbai is also home to many temples that commemorate the religious devotion of the city. Here is our top list of the most famous temples in Mumbai. 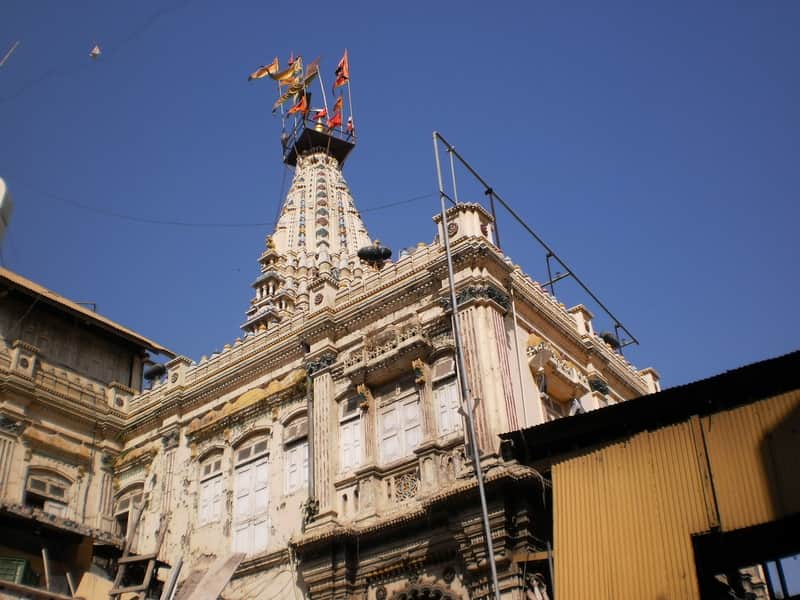 The Mumbadevi temple is one of the oldest temples in the city. In fact, Mumbai city derives its very name form the Mumbadevi temple. The temple is dedicated to Goddess Mumba who is said to be the patron goddess of the native Somvanshi Kshatriyas, agricultural communities and the kolis (Fishermen).

The idol of the goddess is decorated with jewellery like a nose pin, crown and a necklace and is placed on a decorated altar. The idol itself is made from a black stone and the face is painted orange. The temple complex also houses idols of other deities and devotees gather in a larger number on Tuesdays as it considered an auspicious day. 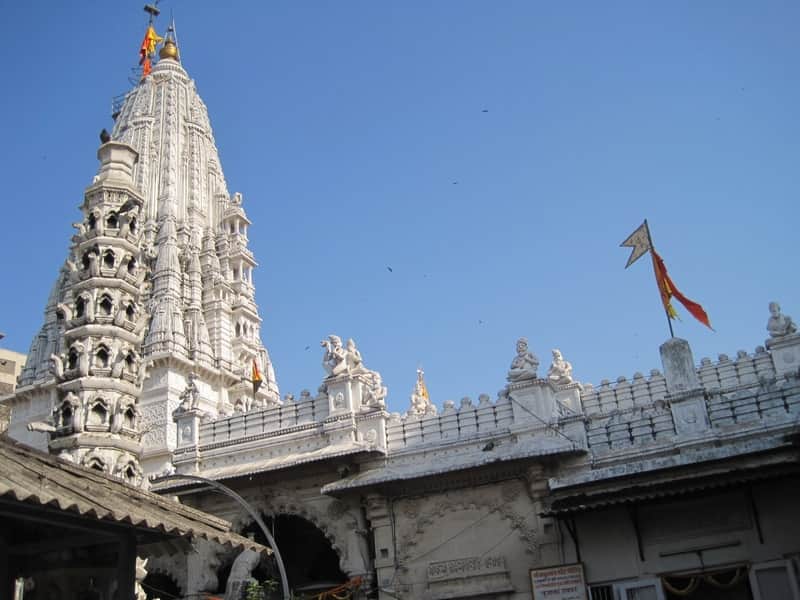 The Babulnath Temple early in the morning

The Babulnath Temple is dedicated to Lord Shiva. It is located in the Malabar region of Mumbai and is just 15 minutes away from Marine Lines Railway Station. The temple is also one of the most iconic temples in Mumbai and is quite famous amongst the Marwari and the Gujarati communities.

Babulnath temple is dedicated to Shiva and is very close to the famous Girgaon Chowpatty. The temple is modelled in such a way that it will remind the devotees of Kailash Parbat, the home of Lord Shiva. The neatly carved architecture leaves anyone who visits the temple mesmerized with its beauty. 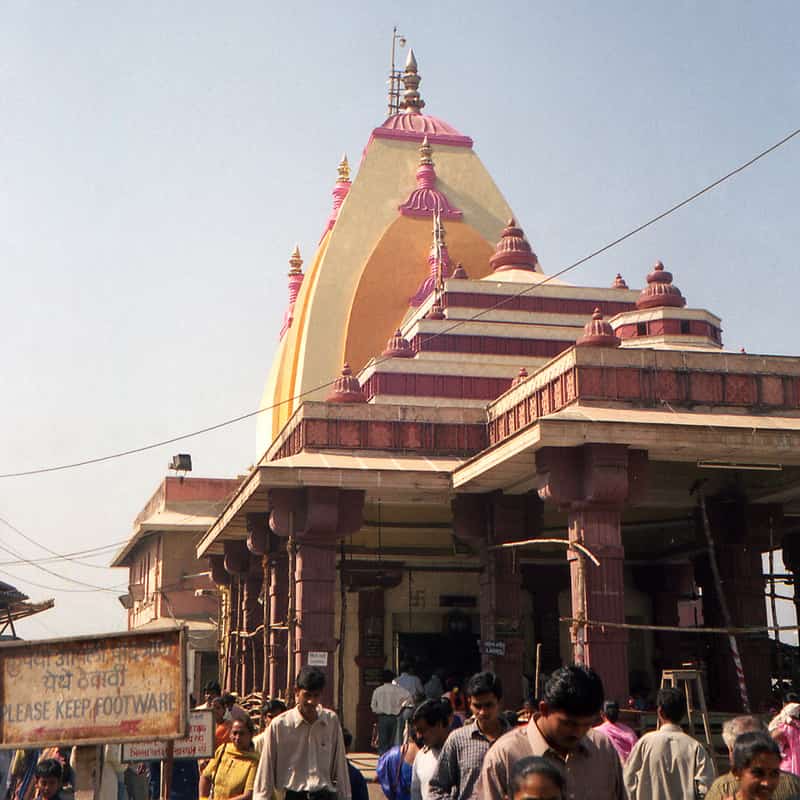 The Mahalakshmi Temple is a very famous temple in Mumbai, dedicated to Goddess Lakshmi, Durga and Saraswati and was constructed by a Hindu merchant in 1831. The temple offers a sea-facing view and is one the key landmarks of the city.

There is a stone carved deep at the entrance of the temple, which connects the mandap to the main deity idol. The Lakshmi idol is decorated with a special nose ring and a golden mask.

During the Navratri Festival, the temple is decorated and sees devotees from all over the country. There are shops nearby that sell puja items and flowers that devotees can purchase. 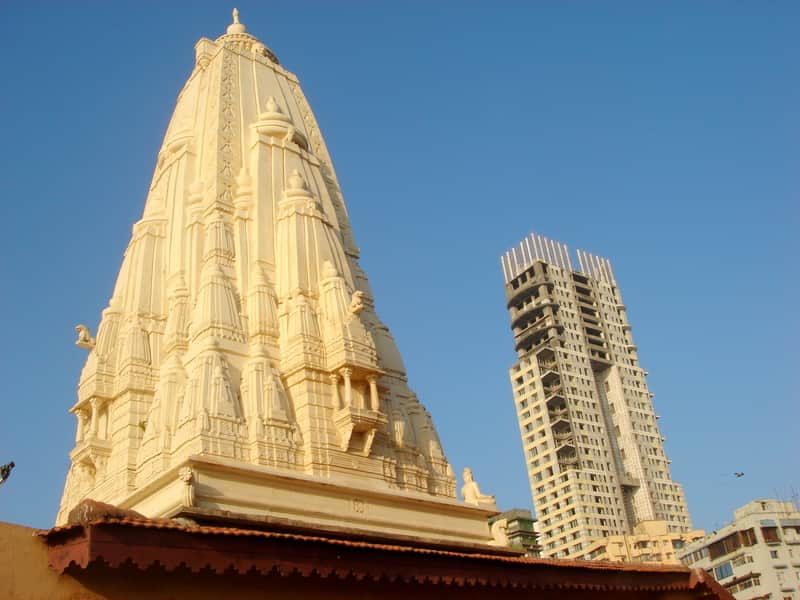 The Walkeshwar temple at Malabar hill

The Walkeshwar temple holds a historical as well as cultural significance to the city of Mumbai. According to legend, Lord Rama made a shivling from sand to conduct his puja. The temple was built by the Shilahara Dynasty about a thousand year ago on the Malabar Hill. The temple pays homage to the legend of Lord Rama as well as the Silhara Dynasty and is dedicated to Lord Shiva.

The world Walkeshwar is derived from Valuka Ishwar, which translates to Lord of the Sand. The temple has undergone renovations twice, in the seventeenth century and once during the 1950s. The temple also plays hosts to several Hindustani Classical music festivals. 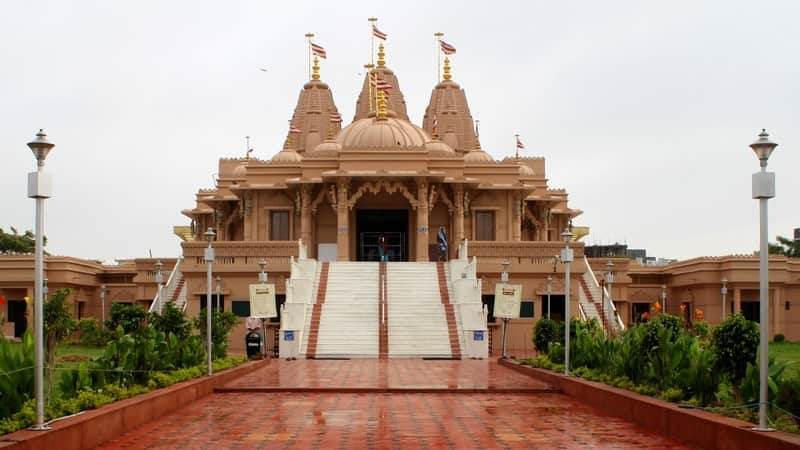 Devotees gathered at the Swaminarayan Temple

The Swaminarayan Temple is owned and operated by the Swaminarayan Sampraday, which is a sect of Hinduism that considers Lord Krishna as their main deity. The original temple was built in 1863 while the current temple was remodeled in 1903 and has been around since.

The temple houses idols of Ghanshyam Maharaj, Hari Krishna Maharaj, Gaulok Bihari and Radha. The festivals of Janmashtami, Ram Navami are the times during which the temple receives the maximum footfall.

The paintings at the Sri Sri Radha Gopinath Temple

This temple was originally built to serve as an orphanage. However, it was bought over by the ISKCON foundation and was converted into a beautiful temple.

The temple was constructed in 1988 and it opened its doors to devotees in 1990. Another unique feature of this temple is that it also home to many animals such as cows, peacocks and monkeys and provides a safe environment for them. The temple is also decorated with various paintings depicting the entire Krishna and Radha saga. The entrance to the Jain Mandir

The Babu Amichand Panalal Adishwarji Jain Mandir is among the most famous temples in Mumbai. The temples was constructed in 1970 and is known for its intricate marble carvings and architecture that will leave visitors mesmerised.

What separates this temple from others is the famous elephant structures at the entrance and the ceiling. The temple is quite famous amongst the Jain Deravasi community and is dedicated to the Adishwar, the first Tirthankaras of the Jain Religion.

The temple also houses other idols of Jain Tirthankaras and idols of Lord Ganesha in the temple compound. Devotees gathered in the thousands at the Siddhivinayak Temple

Siddhivinayak Temple is perhaps the most famous temple in Mumbai, located in Prabhadevi. The temple is dedicated to Lord Ganesha, the elephant-headed God. The temple was founded in 1801 by Devbhai Patil and Laxman Vithu, who also founded many many other Ashtavinayak temples in Maharashtra.

Tuesdays are a special day to visit the temple for darshan. People also believe that if you whisper your innermost wishes into the ear of the idol, they come true. The temple also attracts the likes of celebrities ranging from Bollywood actors to famous sportsmen. Devotees resting after a day of Darshan

ISKCON is the home to the Hare Krishna movement which was founded in 1978 in Mumbai by the Acharya Bhaktivedanta Swami Prabhupada. People from all around the world come to visit the temple to find inner peace and find a spiritual calling that will take them to another world.

The temple is made of pristine white marble and consists of intricate carvings. It is a sight to behold. Krishna is the main deity that is housed in this temple. The temple also serves as a meditation centre where devotees can come and spend time in serenity and achieve tranquillity. The temple compound also has an auditorium, a guest house, libraries and a restaurant. The restaurant also provides free meal for the poverty-stricken people on certain days.

There used to be a Devi and a small Ayyappa temple before the Mini Sabrimala Temple was constructed. However, it was demolished by foreign invaders who also killed the temple priests. The ruins of the temples can still be witnessed to this day at the Mini Sabarimala temple. The Balaji temple is modeled after the temple in Tirupati.

The Balaji temple at Nerul is highly revered by the South Indian community in Nerul. The temple is constructed on a small hill in Nerul and the temple is quite close to the railway station.

The temple’s main deity is Balaji but the temple compound, which is quite humongous, also has temples dedicated to other Gods such as Lakshmi, Narasimha, Vidya Ganapati, Ramanuja and Vishwaksena.

The temple was inaugurated by S Venkata Varadan, who served as the Director of the Nehru Planetarium in 1990. The temple stands at approximately 60 feet high and the temple complex also includes a garden. The Samadhi at the Shirdi Sai Baba Temple

Shirdi is a pilgrimage site made famous by the Saint Sai Baba. Sai Baba was one of most well-known saints in India and was known for being selfless and highly dedicated to the poor. This earned him the respect of many and was worshiped by all the stratas of society.

The temple complex is sprawled across two hundred square meters, containing other temples in addition to Sai Baba’s shrine. The temple is one of the richest temples in India with donations that may surpass a billion rupees annually. 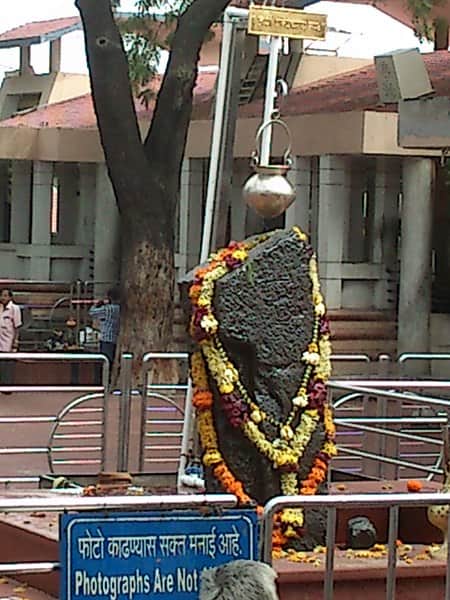 The Shani Dev idol at Shingnapur

Shani Shingnapur is a little village close to Shirdi, and is the house of Lord Shanidev. The idol of Lord Shanidev at this temple is believed to be Jagrut Devasthan, which means that the deity still resides in the idol.

One interesting fact about this village is that it doesn’t have doors or windows, since it is believed that Lord Shani Dev will protect them from any thievery or other such crimes.

The temple is visited by devotees by the thousands everyday. The temple during the morning prayers

The Trimbakeshwar temple was built by the Maratha Peshwa Shri Nanasaheb between 1755 and 1786. The temple is dedicated to Lord Shiva and the Jyotirlinga. The temple is surrounded by three hills, Brahmagiri, Nilagiri and Kalagiri, and also has three lingas that represent the faces of Shiva, Vishnu and Brahma.

The notable feature of the linga is that a jewel-studded crown rests on its head and is displayed to devotees on Mondays after evening prayers.

A visit to a temple can rejuvenate your spiritual energy and can also relieve you from the everyday stresses of life, particularly if you live in an ambitious city like Mumbai. If there’s anything you would like to know about these temples, don’t hesitate to let us know in the comments. Mumbai is a busy city. The cultural diversity of the city, the hip lifestyle 27 Iconic Places to Visit in Mumbai

From natural calamities and nasty monsoons to terror attacks The Top 12 National Parks In Mumbai For Nature Lovers

Mumbai offers tourists many outdoor activities to enjoy. There are water and amusement parks, trekking trails, beaches, bird sanctuaries and other outdoor experiences. But one of the best ways to ... Mumbai is often referred to as ‘The City that Never Sleeps’! With hectic work schedules and constant meeting deadlines, people living in this city wish to opt for the much-needed ... 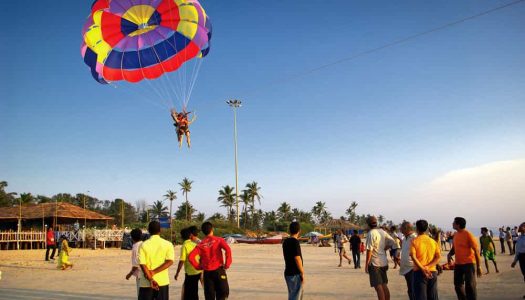 Shaded by the Western Ghats on one side and the Arabian Sea on the other, Mumbai is primarily called the finance hub of India. This finance hub is embedded with ... Are you unhappy with your current situation? Are you stuck in a rut of sleeping, working, eating, and repeating? Then it’s time to spice up your life by visiting the ...