The Top 15 Places For A 2 Day Trip from Hyderabad

Hyderabad is popularly knowns as the city of Nawabs and is the capital of the Telangana state. The city is famous for its food and culture. Its surroundings, too, are exquisite, with the rich and tantalizing culture extending out into the vicinity. Here are our top picks for two-day trips from Hyderabad.

2 day trips near Hyderabad (up to 200 kilometers) 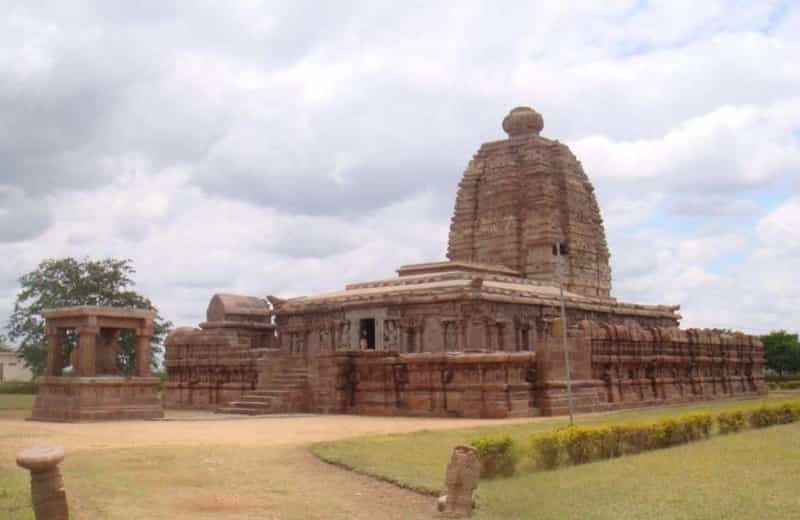 A temple at Mahabubnagar (source)

Mahabubnagar was named after the Nizam of Hyderabad. The town was once the source of the famous Golconda diamonds that included the famous Kohinoor diamond as well. The town has a number of historic as well as religious sites.

Two major rivers of India, namely the Krishna and Tungabhadra, flow through the town and make for a popular picnic spot as well. The town is also home to a 700-year-old Banyan tree.

Also Read : 8 haunted places in India which are not for the faint-hearted 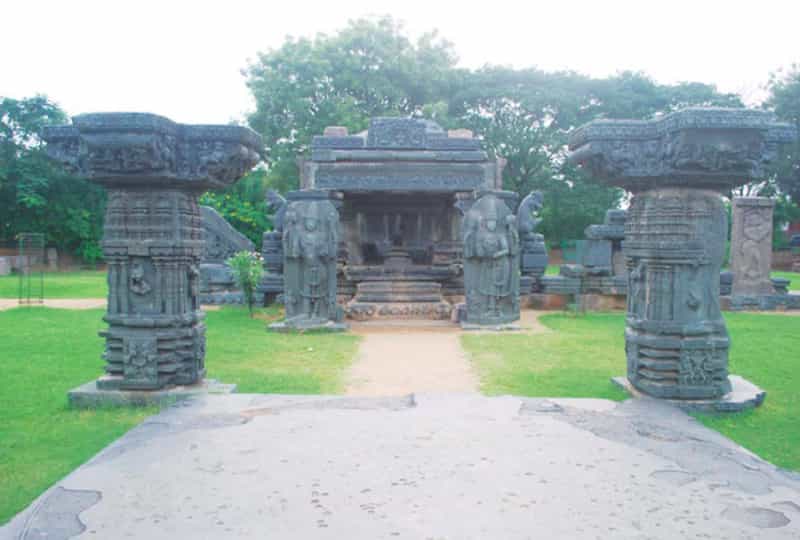 Carvings at the Warangal Fort (source)

Warangal was once the pride of the Kakatiya Dynasty that ruled over the city for over a century. The Kakatiya Dynasty was known for their architecture. There are several important monuments in the city of Warangal like the stone gateways, the Swayambhu temple that has been dedicated to Lord Shiva and the famous Ramappa temple that is located close to the Ramappa lake.

There is also a star-shaped thousand pillar temple very near to the station of Warangal that leaves every onlooker mesmerized with its beauty. Bidar is a city that has its roots in ancient India. Perfect for a two day trip from Hyderabad, the city has, in recent times, seen rapid urbanization. But it is surrounded with souvenirs from now-forgotten dynasties that ruled the cities in succession.

The city is known for its handicraft products especially those made out of silver. The key attraction of Bidar is the Bidar Fort which happens to be one of the biggest forts in India.

Also Read : A Complete List of Things & Places Hyderabad Is Famous For

The Nagarjunasagar is formed due to a dam constructed on the Krishna river. It stands on a site that once used to house several Buddhist monasteries and universities.

The dam also provides a panoramic view of the lake and makes for a good tourist spot. The site attracts a lot of tourist from Hyderabad that wants a view of this man-made reservoir. 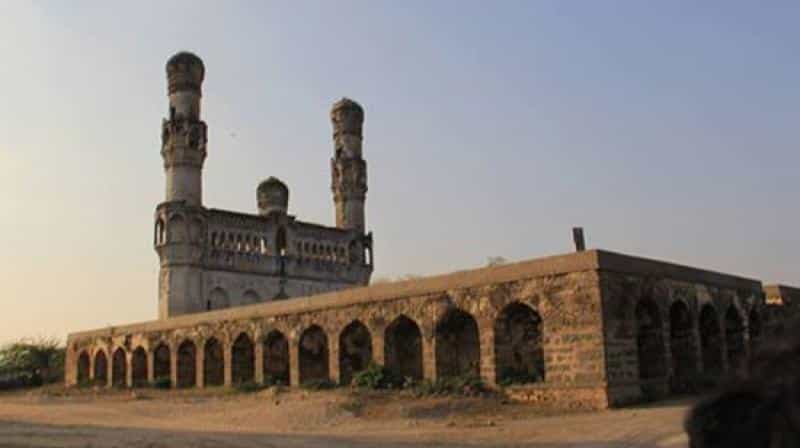 Karimnagar is a town famous for being a famous pilgrimage site. The town is home to many ancient temples that gather a footfall of devotees from all over. The city also served as the hub of Vedic learning in the ancient times.

The town is also famous for being the center of various archaeological excavations and key findings. The town is also known for its silver filigree work that was started in this town over 400 years ago.

2 Day Trips near Hyderabad (Up to 300 kilometers) 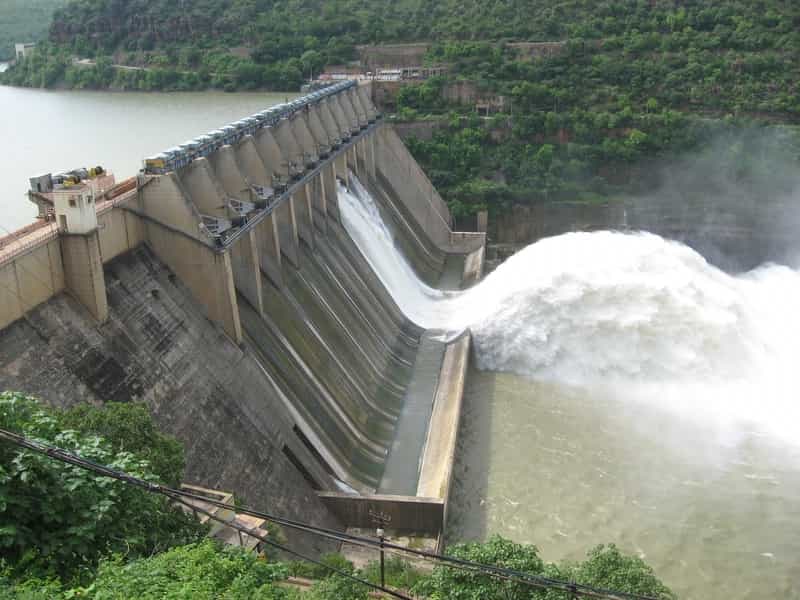 Srisailam is a town that is situated deep in the heart of the Nallamala forest in the Kurnool district. The town commands a prominent place in the Hindu religion as the town has one of the 12 jyotirlingas dedicated to Lord Shiva.

The town is also home to the Akkamahadevi caves that are approximately an hour long away from patalganga. You can also visit the famous Nagarjuna Srisailam Tiger Reserve, the only tiger reserve in the state. 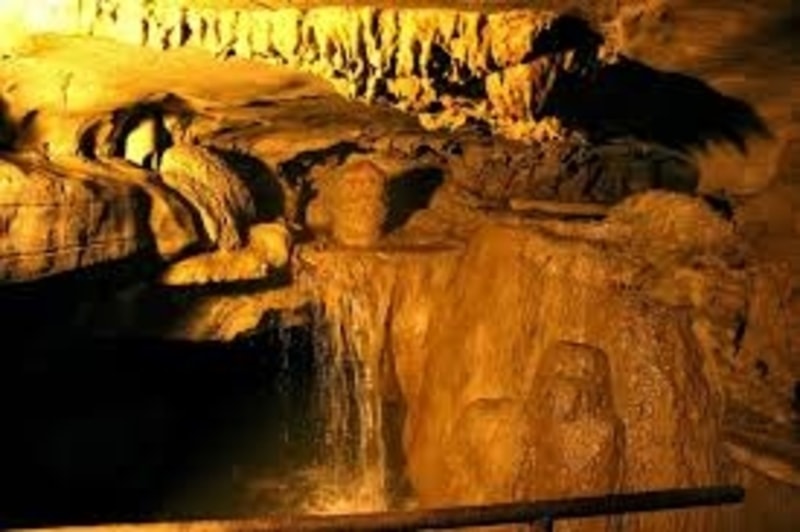 The famous Belum caves at Kurnool

Kurnool was the former capital of the princely state of Andhra Pradesh. It is located very close to the Tungabhadra river. The Hundri and the Neeva rivers flow through the city. The Belum caves are famous for the stalagmites and stalactites formations.

The city is also home to the Oravakallu rock garden that is made up natural rock formations. If you don’t prefer to visit these rocky sites you can visit the rollapadu bird sanctuary and engage in birdwatching. 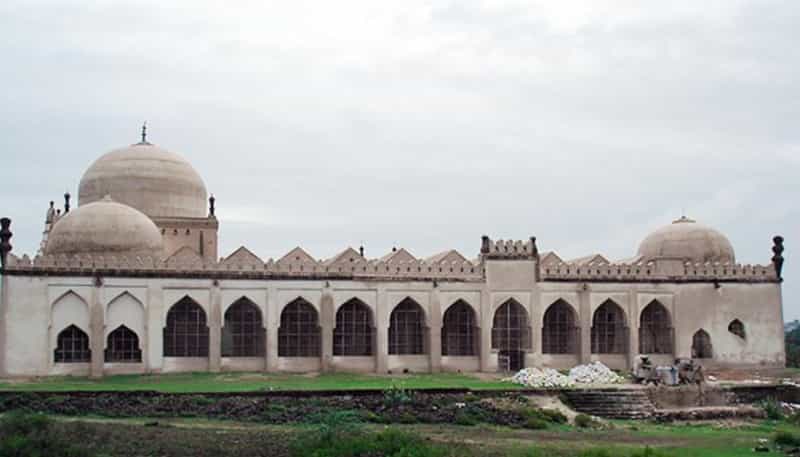 The Jama Mosque at Gulbarga (source)

The city of Gulbarga once belonged to the Nizam of Hyderabad. It served as a key vantage point for the Nizami army that gave it a strategic overview into the entrance of Karnataka. The city is famous for the Gulbarga fort that was built by the Hyderabadi Nizam’s army.

The town is also filled with the remnants of the Nizam Dynasty like the Jama Mosque, which was built in the 14th century and has a huge dome that makes for a marvelous site. 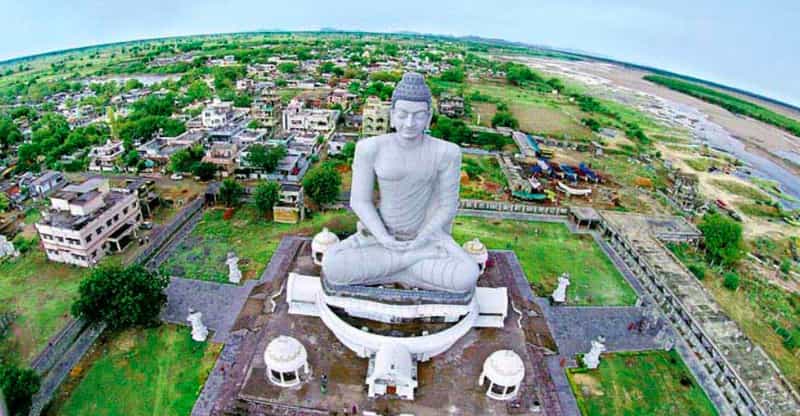 The famous stupa in Guntur

The city of Guntur has which is now a city buzzing with industrial and business activity was once house to the Buddhist culture reform that hit India. The city of Guntur is also known for the famous Undavalli caves that were built in the 5th century and was carved on the solid rocks by the hillside of Undavalli.

The caves are also home to a number of temples that devotees come to visit. Guntur also has the famous Uppalapadu Bird sanctuary that sees up to 40 species of migratory birds all the way from Siberia.

2 day trips from Hyderabad (Up to 400 kilometers)

A waterfall at Adilabad

Adilabad is a small town in Andhra Pradesh famous for the number of waterfalls it is surrounded by. It has a diverse population and the local cuisine is, therefore, quite varied.

The town is also home to Mavala lake that was built during the Nizam period. The lake serves as a camping spot and the park near it is famous, too. 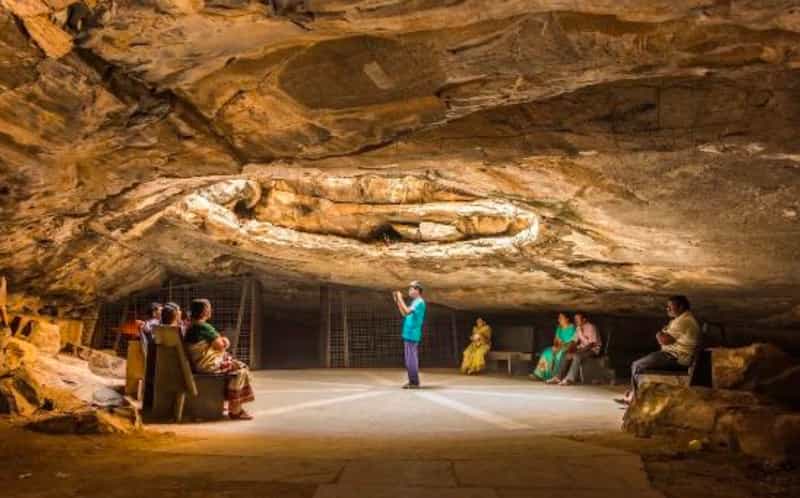 Visitors gathered beneath the meditation hall at Belum Caves (source)

Belum Caves are the hidden jewels of Andhra Pradesh. They stretch long and strong and were formed by the now dried up river that eroded the stones beneath. The caves are over 3000 meters long and happen to be the longest cave structure in India.

Beneath the cave, there are spaces that were once used by Buddhist monks to meditate. The cave spaces are now turned into a meditation hall that visitors can use on their trip here. 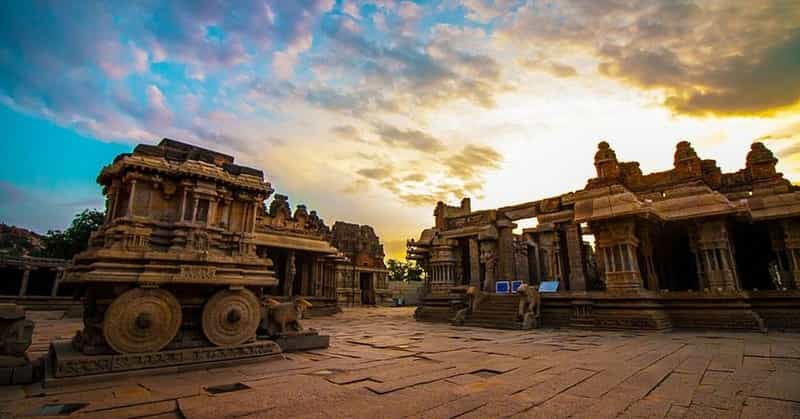 One of the many relics at the city (source)

The village of Hampi is a UNESCO World Heritage site. The place contains souvenirs and brilliant architecture from the Vijayanagara Dynasty and is a sight to behold. The town also serves as an important landmark of the Vedic revolution that started in Karnataka. The town and the heritage site are home to some of the most beautiful and exquisite temples you will ever see.

The town of Hampi is also visited by many adventure enthusiasts who like to engage in the sport of bouldering.

A temple site at Pattadakal (source)

Pattadakal is another world heritage site situated on the banks of the Malaprabha river. The quaint village in Karnataka is a testament to the Chalukya dynasties prosperity. The village is packed with monuments from the Chalukyan era that signifies their amazing craftsmanship.

The town is visited by many history enthusiasts who want to witness a relic of their forgotten past. 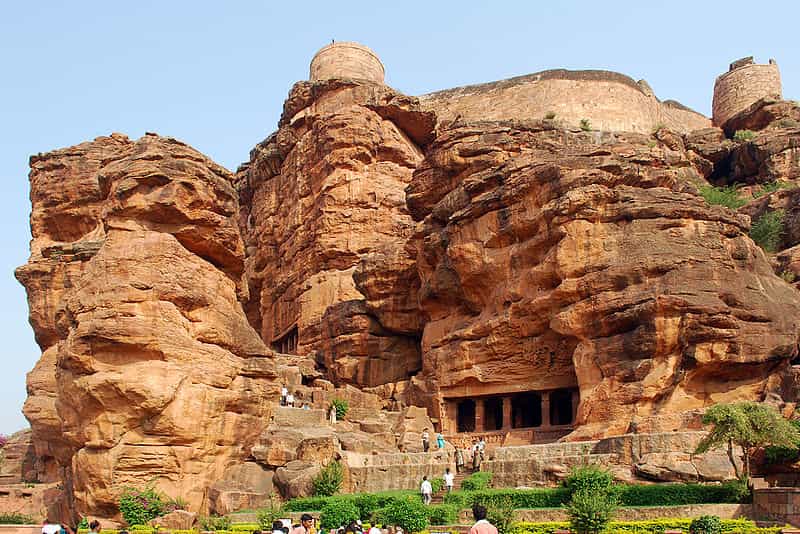 The cave entrance at Badami (source)

Badami is a town famous for the temples that are carved entirely out of the surrounding rock. The town is located in a narrow valley and mystifies everyone who visits here with its beauty.

The town Agastya Lake is also located in the town and is surrounded by red sandstone projections. The town serves as a popular hiking spot with the temples that are carved into the rocks.

2 day trips near Hyderabad (above 400 kilometers) 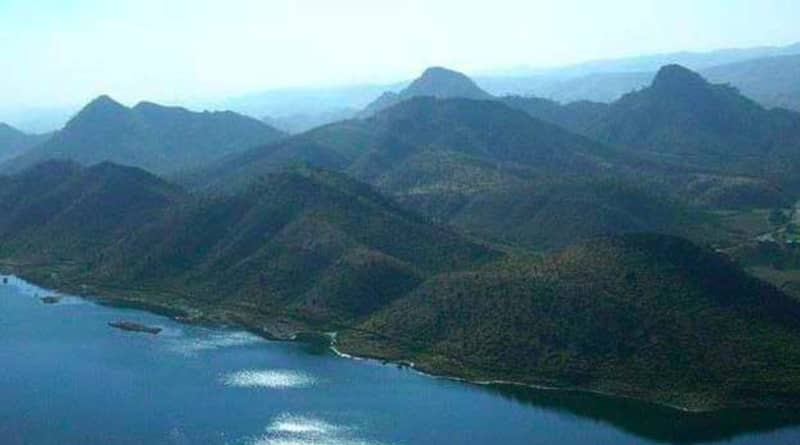 The Horsley Hills is a hill station near Hyderabad that provides a stunning view of the nearby landscapes. The surroundings are filled with thick forests that are home to some exquisite flora and fauna.

Horsley Hills is also home to lakes like the Gangotri and the Mansarovar, which are good camping sites. The Koundinya Wildlife Sanctuary is also very close to the molehills and you can expect to see one of the many wild elephants that roam freely in the reserve.

The next time you think of escaping the city for the long weekend or just feel like taking a trip from Hyderabad, do visit the places mentioned above and let us know of your experiences in the comments section below.

Book Treebo hotels in Hyderabad and get 100% guaranteed quality stay. For all the attractions for which Hyderabad is famous, it is the wide variety of water parks that catches the attention of many people. Summers in Hyderabad can really be ... 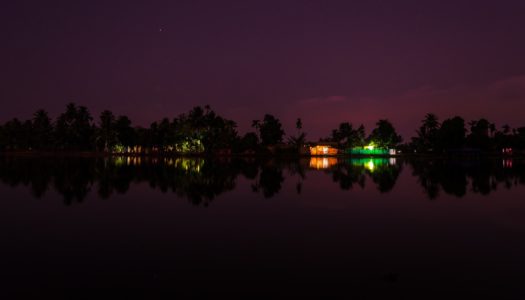 Alleppey or Alappuzha as it is known by the locals is known as the Venice of the East. The beautiful town is full of backwaters, lush green paddy fields, and ... 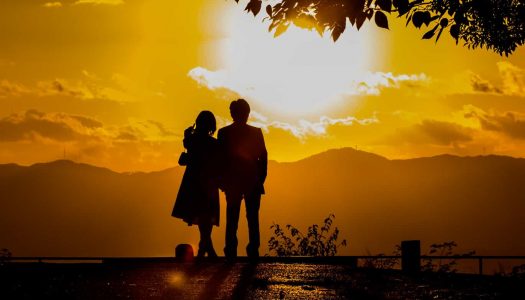 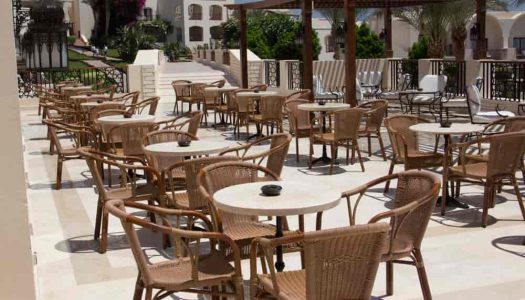 18 Mind-Blowing Rooftop Cafe in Delhi to Make a Visit

Admiring the nature and cherishing every single bite is all you need to make a perfect evening in Delhi. It is said that simplicity is the ultimate sophistication; what’s simples ... 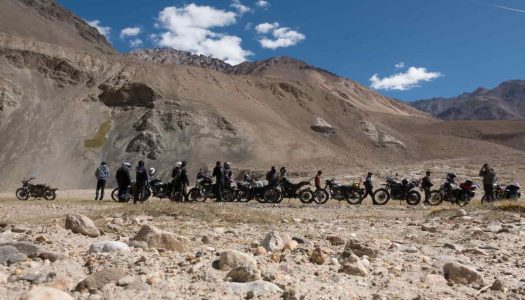 A Short Guide To Plan Your Bike Trip To Leh-Ladakh

A biker’s haven – Ladakh has always beckoned the spirit of a true biker, amateur as well as experienced kinds. There is something about a trip to Leh-Ladakh that gets ...