Nestled on the Konkan coast, the city of Mangalore is the perfect host to the amalgamation of both the exquisite beauty of south and the rising techno business parks aiming for a better future. Among the different facets of the city, one of the most prominent streaks is that of its street food. Being a coastal region the place has an inexplicable supply of coastal ingredients like coconut oil, seafood, and rice, and most of the street food in the city comprises of these basic ingredients. To elucidate on the best street foods in Mangalore a short list of some street delectables has been compiled below.

13 Street Foods in Mangalore to Indulge In 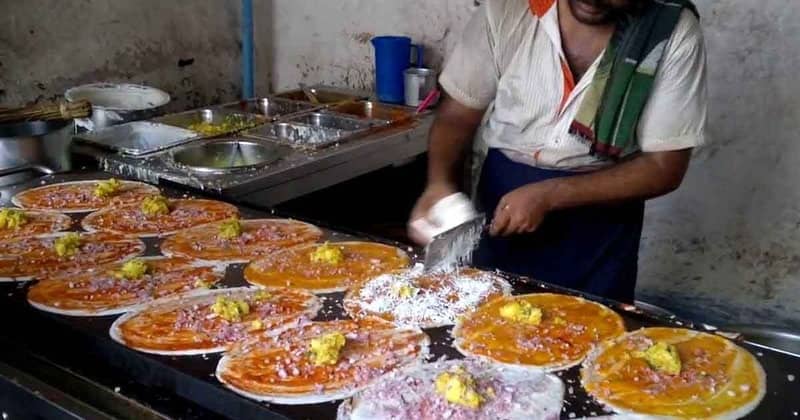 Being a part of the southern section of the country, the most common form of street food that would be found in the city have to be the south Indian delicacies like dosa, vada, idlis and the rasam. These are some of the most favored and the most delectable of all street foods in Mangalore. Quite easily available through the city, the differentiated taste of these dishes is must try when in the city,

Mangalore buns, unlike their name, are not an Indian version of buns rather they are a local food inspired by the north Indian bhatura. The dough, in this case, is impeccably spiced and infused with ripe bananas for that perfect taste and aroma. Ideal when had with coffee, these buns are among the best street food in Mangalore. 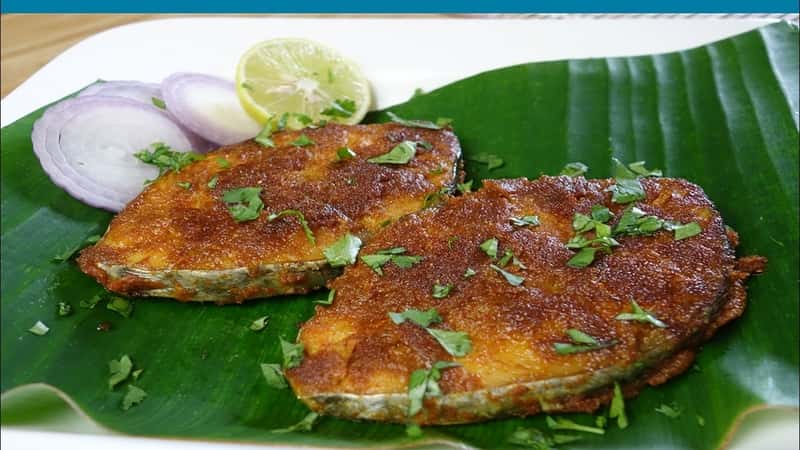 Having two-way preparations for their daily catch, the kingfish, and the seerfish is a famous street food in Mangalore. Owing to fact that Mangalore is a coastal city, this dish is quite easily available through the city on a daily basis.

Another favorite street food of the people of Mangalore is the samosa. Available in varied forms like in a chat form or simply served with chutney; this dish is enjoyed by people of all ages. A classic dish made of refined flour with an abundant filling of the potatoes and deep fried to that perfect golden shade, samosas are available at many outlets in the city.

Prepared in a variety of forms, the egg dishes are also some of the most cherished street food in Mangalore. The different versions of the egg preparation in the city include egg bhurji, omelet, egg rolls, egg chili and egg stumbler. The widespread favoritism towards eggs has also made them an inclusion in standard dished like fried rice and cheese toast.

The spicy dish made with rice is another of the street food in Mangalore that is relished with quite a fervor.  The astounding flavors of the biryani in this little city are varied and have more takers than any other street food.

The ever delicious chicken and its varied dished are also quite a share in the street food market of Mangalore. Be it the Indian version of the dish or the English, there are both types of preparations available in the city. The chicken rice or biryanis are a thing which quite commonly available here. Butter roasted and ghee roasted specialties are a superstar in the street food market here. 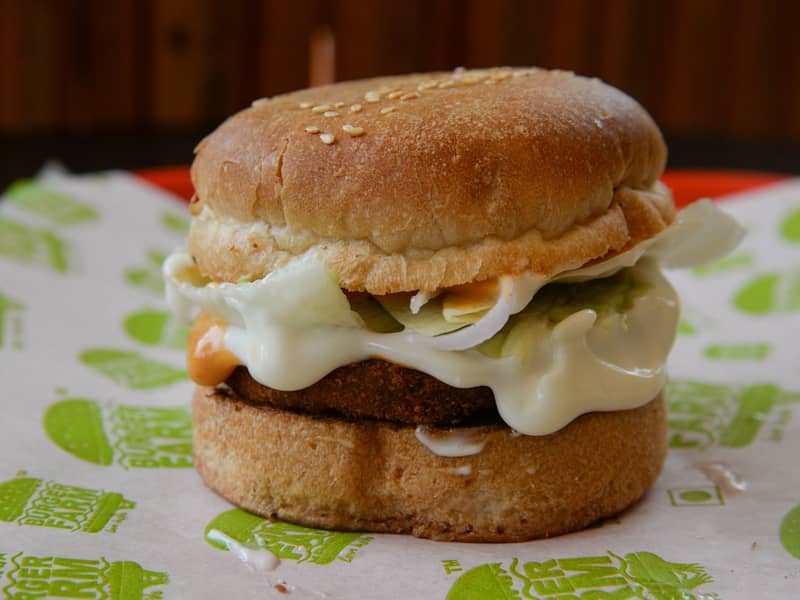 An internationally favorite street food and fast food, the Sandwiches and Burgers are quite evidently available in Mangalore too. Having several cafes and stalls hosting this common dish in their varied versions of flavors and fillings, sandwiches and burgers are among the famous street foods in Mangalore.

Among the hit street foods in India, Bhel puri is a dish that is easily available in the streets of Mangalore. Basically a concoction of the puffed rice and tamarind sauce, the Bhel comes with a generous sprinkling of peanuts, raw mango slivers, and potatoes. Also called charmuri, this chaat form is a must try in Mangalore. 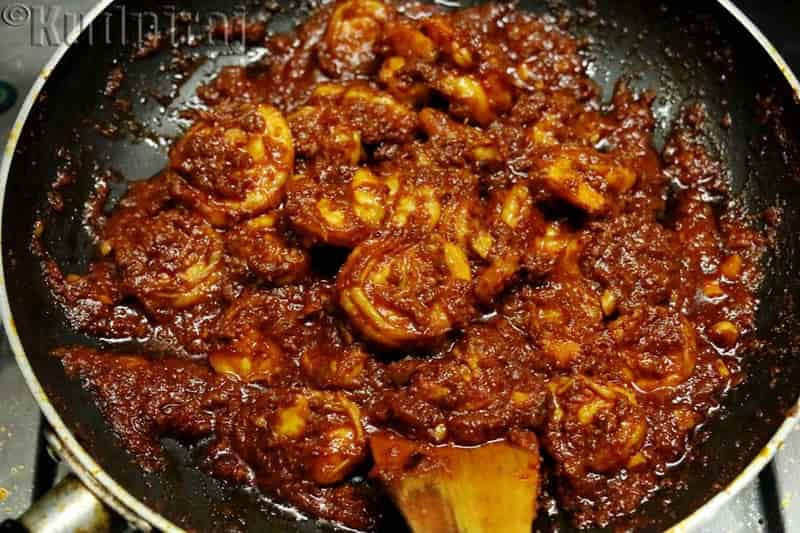 Being a coastal region, Mangalore has an abundant supply of fresh ingredients from the sea, making seafood a much hit in the culinary scene of Mangalore. Some of the most cherished street food in Mangalore, the seafood collection comprises butter roasted prawns and crab, bondas pepper fry, ghee roast crab and crab meat soup. 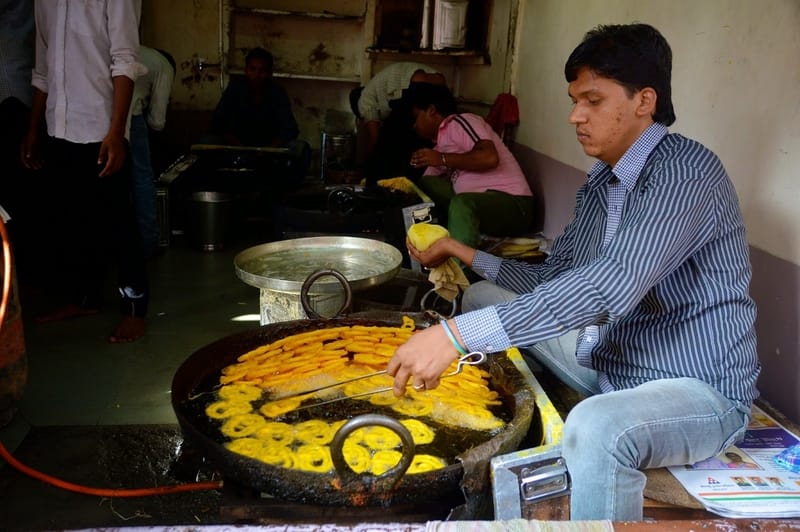 Yummy Jalebi in the making

The deep friend and sugar-coated Indian sweet; the jalebi is an easily available treat in Mangalore too. Here this simple preparation comes in varied fruit flavors as well, which is a rarity in the country.  The Grape Jalebi for one is a delicious Mangalorean street food. For the people with an unexplained bend towards the flavor of sugar, this dish seems surreally exquisite. 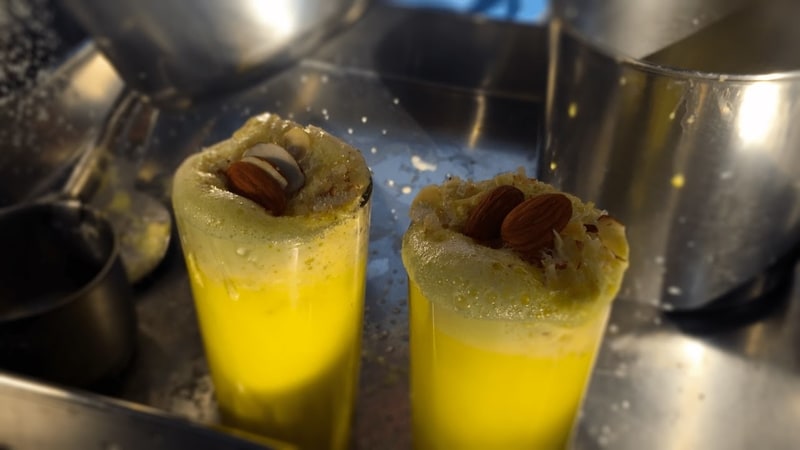 The Indian version of the Almond Milk, loaded with rich ingredients like dry fruits and Saffron, the Badam milk is a famous street food in Mangalore. Available in options of pistachios as well, the Badam Milk is more preferred as a cooling drink which is enough to satiate the appetite as well.

The thick deep-fried chunk of Indian bread, the Kerala parantha is more like an exotic street food in Mangalore. Available with a variety of curry options to choose from, the Kerala Parantha is exquisite in taste.

The above-mentioned dishes and their corresponding eateries are surely increasing your allure for the city, but the best is known only once it has been experienced. Therefore, visit the aforementioned best street food places in Mangalore to witness its diversity and explore its palatable cuisine yourself.

If you have been to the city, or have had the chance to enjoy the flavorsome street food in Mangalore, we would love to hear your end of the story too. So do share your experiences suggestions and recommendations with us in the comments section below. 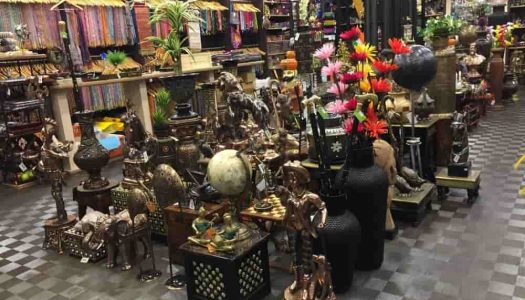 Never be bored with these 16 things to do in Mangalore

Mangalore is a complete package for people who are looking for the best of everything. The city can offer you some delicious cuisines, especially for the seafood lovers, along with ...

Whirlwind Tour Across The 18 Best Places To Visit In Mangalore

Mangalore has located approximately 350 km from the capital of Karnataka that is Bangalore. The beautiful view around the city which is surrounded by the Arabian Sea and the mountain ranges ...