16 Stellar Places to Visit in Rameshwaram

Located in the Ramanathapuram district of Tamil Nadu, Rameshwaram is one of the four important pilgrimage centres know as Char Dham and attracts thousands of visitors in a year. Pamban channel separates it from the mainland, and the waters surrounding it make it extremely attractive to visitors who are not particularly interested in its connection to the days of the Ramayana.

The beaches here are clean and the landscape offers a great subject or backdrop for any picture you may want to take. Let’s talk about the beautiful places to visit in Rameshwaram, including some temples and ponds.

Places To Visit In Rameshwaram 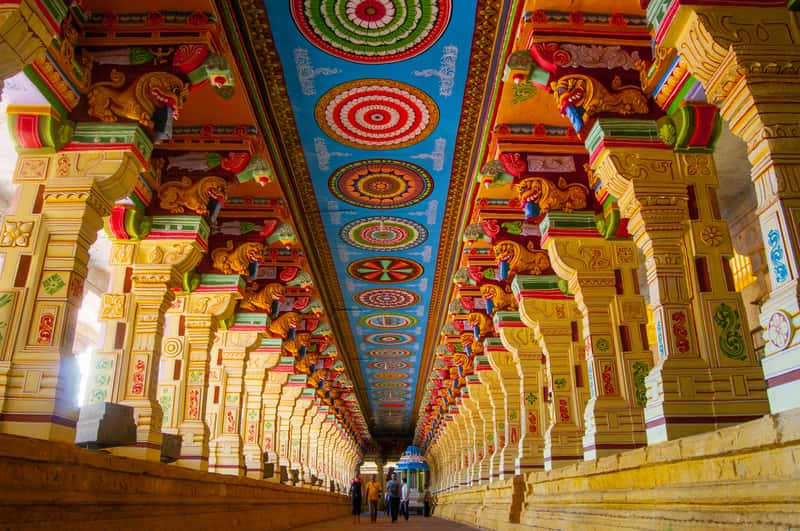 The Largest Hallway in India at the Ramanathaswamy Temple

This temple dedicated to Lord Shiva houses one of the 12 Jyotirlingas located in different parts of India. Said to have originally been built by Rama himself, the temple contains a very famous 197-metre-long hallway flanked by beautiful and ornately carved pillars.

With a 54-metre tall gopuram, the temple is considered a prime example of Dravidian architecture. The temple’s construction was started in the 12th century and the different parts are credited to many different rulers. 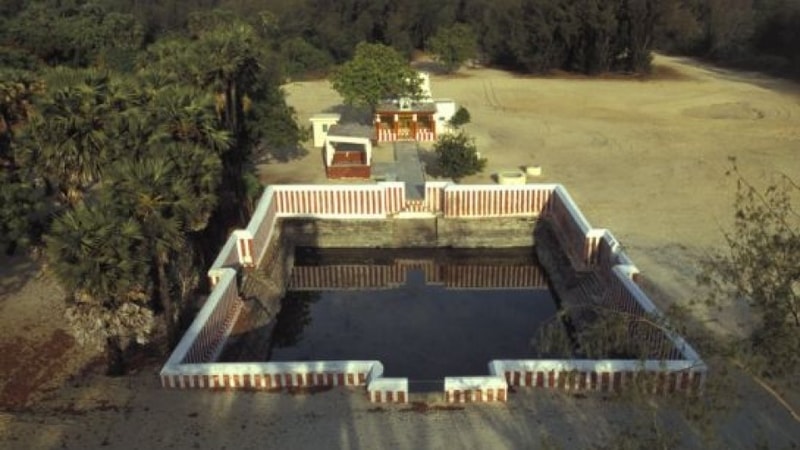 This is a sacred pond where Rama is supposed to have washed his matted hair or jada, after killing Ravana and before worshipping Lord Shiva.

Located on the way to Dhanushkodi, this pond is held highly sacred by Hindu pilgrims who come in huge numbers to visit the pond and to worship at the only temple to Lord Shiva at Kapardiswara, which is located here. 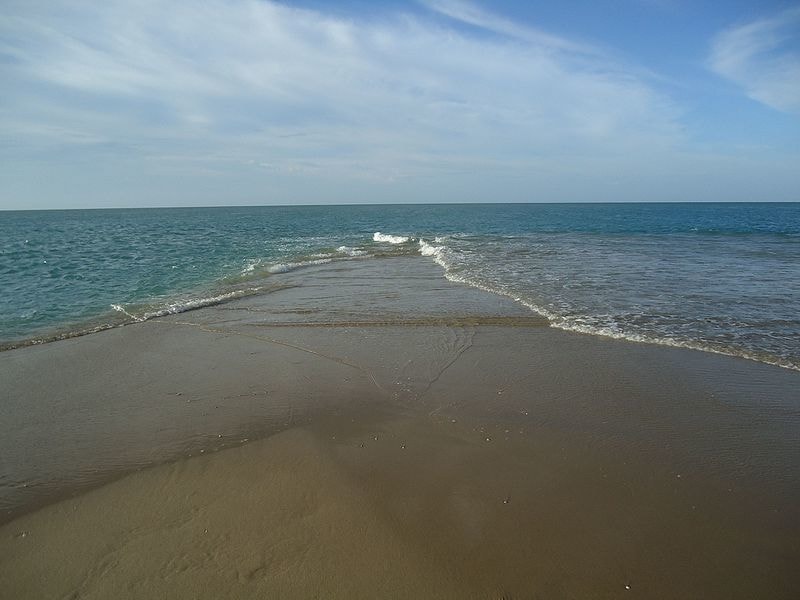 Dhanushkodi meaning ‘end of the bow’ is a small town located at the south-east end of Pamban island in Tamil Nadu. The temple here is described in the Ramayana but currently has nothing but ruins which have been left behind due to the ravages of the sea and time.

The town itself lies abandoned and uninhabited since the 1964 cyclone which destroyed the town and took many lives. 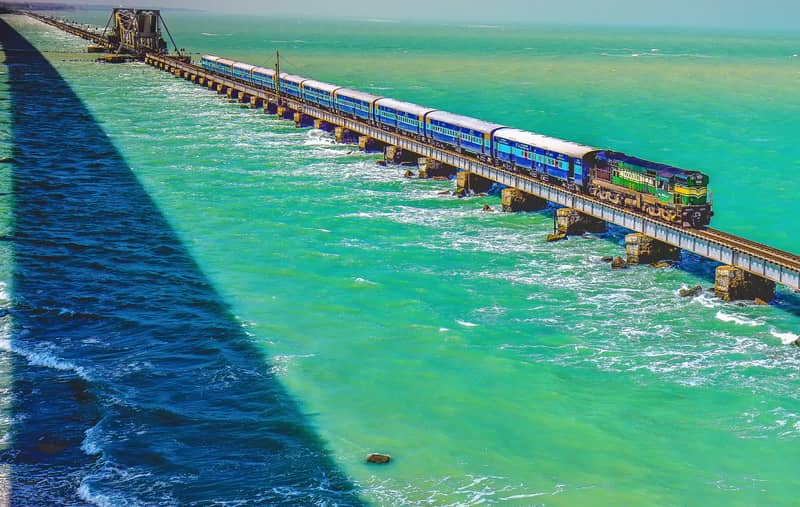 A Train crossing the Pamban

This sea bridge was opened in 1914, connecting the town of Rameshwaram on Pamban island to Mandapam on the mainland. This 100 years old bridge contains 143 pillars, each of which is 220 feet in length and 100 tonnes in weight.

The bridge is conventional for the most part but has a double-leaf bascule section which can be raised to let ships and barges pass through. The bridge spans a distance of 2.345 km and took 14 years to be completed. 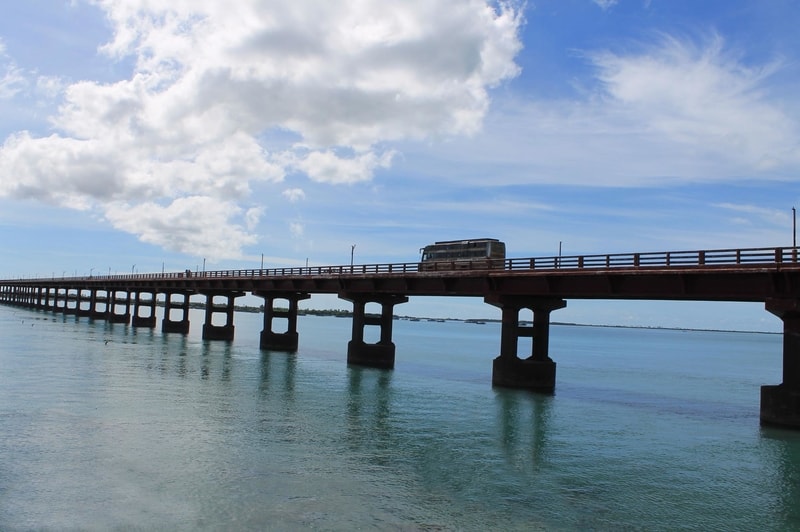 The Annai Indira Gandhi Road bridge was built right next to the Pamban Bridge, connecting Rameshwaram to NH 49 on the mainland. This bi-lane bridge allows you to glimpse the trains crossing the railway bridge as you drive over the bridge. 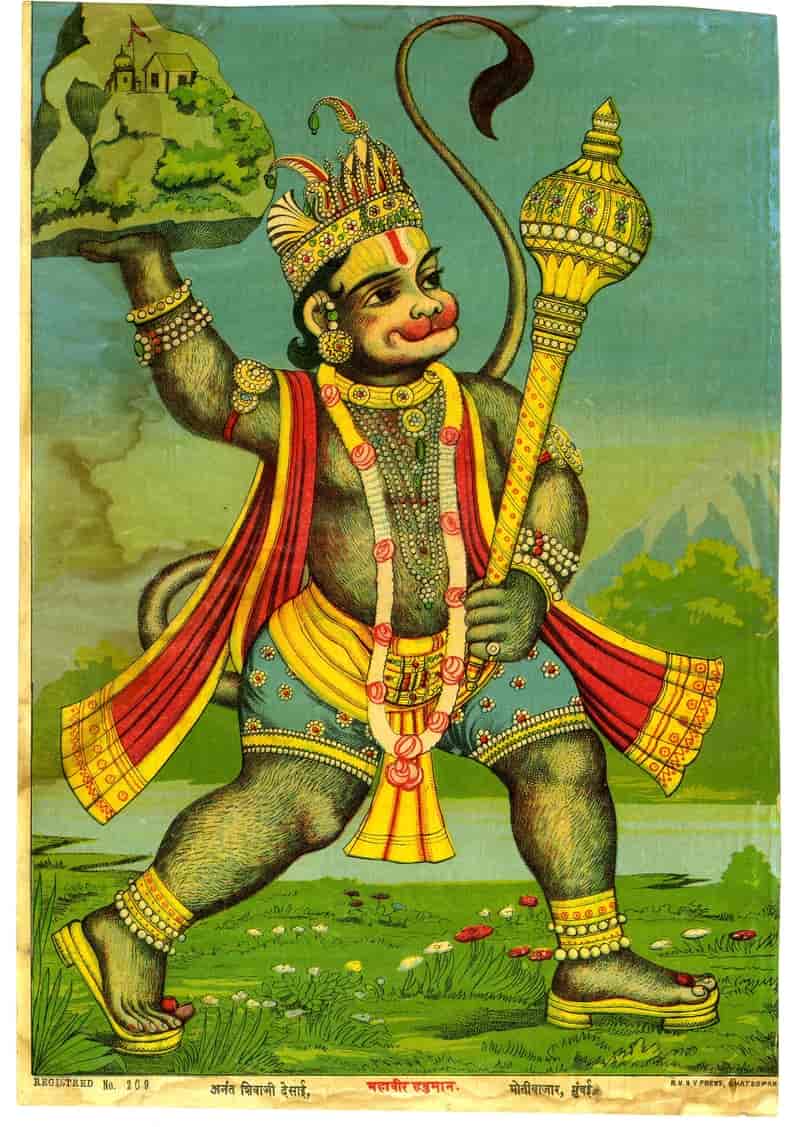 Hanuman fetching the Sanjeevani in a painting by Raja Ravi Varma

This is the name of a mountain, which legend has it was ferried on his back by Hanuman to bring the life-saving Sanjeevani herb for Rama’s brother Lakshman, who swooned in battle.

The place is very quaint, offering a beautiful view of the whole island from its peak. There is also a two-storeyed temple to Rama, which has the imprint of his feet on a chakra. 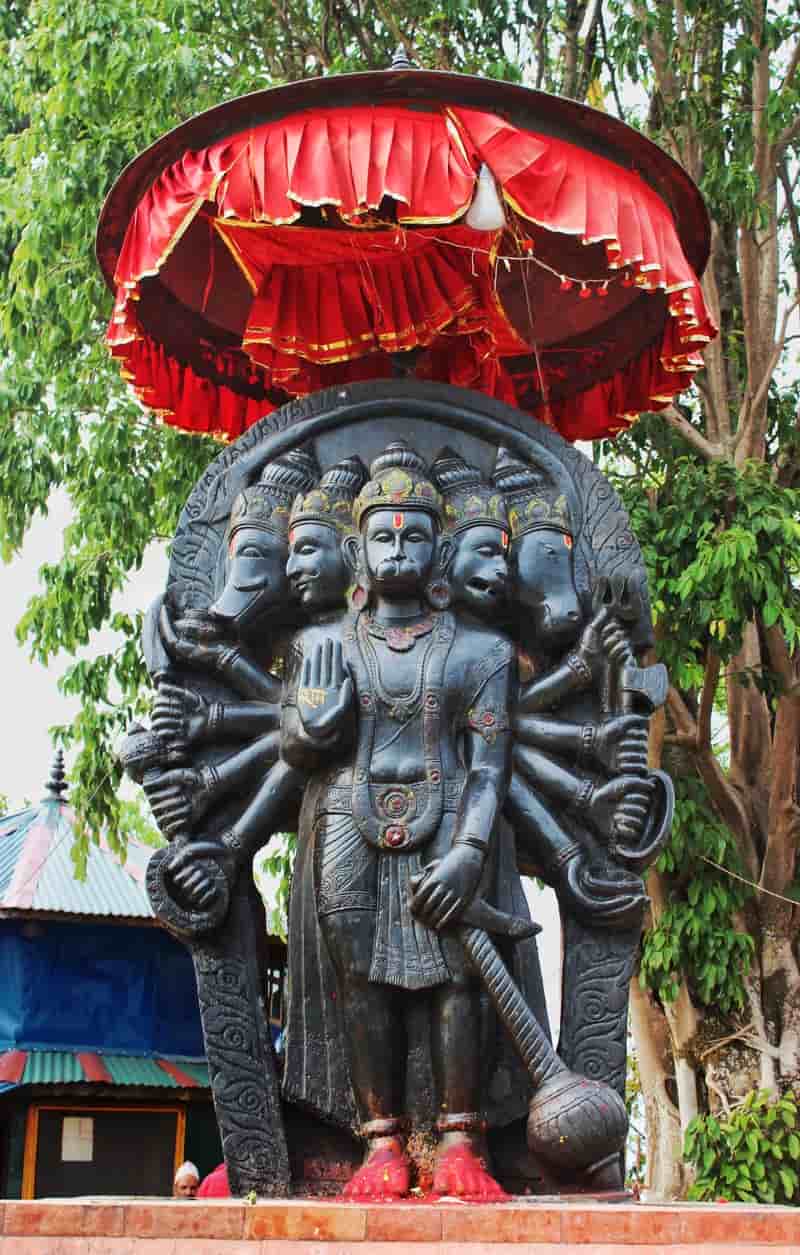 Idol of the Panchmukhi Hanuman at Rameshwaram

The idol of Lord Hanuman or Anjaneya here has four other heads, of Lords Narasimha, Adivaraha, Garuda and Hayagriva. The statue is smeared with Sindoor and worshipped by Hindus with complete devotion along with the idols of Rama, Lakshmana and Sita who also have shrines here.

The ‘floating stones’ on display here are considered to prove the legend of the Rama Setu across the sea to Lanka.

Adam’s Bridge or Rama Setu is the legendary bridge described in Ramayana as having been built by the Vanara Sena of Rama, to cross over from the Indian subcontinent to Sri Lanka. These are a chain of limestone shoals which connect Dhanushkodi at the tip of India’s Pamban Island to Sri Lanka.

Situated 8 kms away from the Ramanathaswamy temple, the temple to Nambu Nayaki Amman is a highly popular goddess, worshipped in this region.

The goddess is believed to offer good health and progeny to the worshippers. Anyone facing problems in the region trust the goddess to help them come out of their problems. 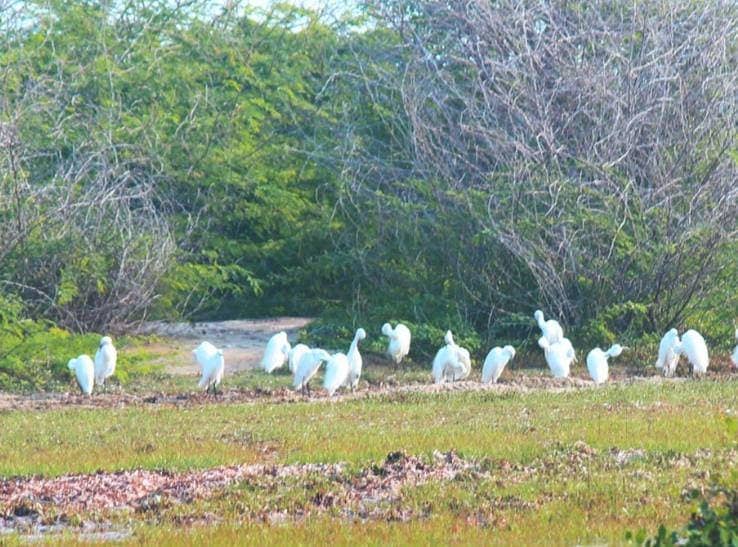 Birds at the Water Bird Sanctuary at Rameshwaram

Between October and January, one gets to see a lot of migratory birds along with the local birds which make this one of the most interesting spots in Rameshwaram, which have no connection with any religion. The sanctuary attracts a lot of visitors. 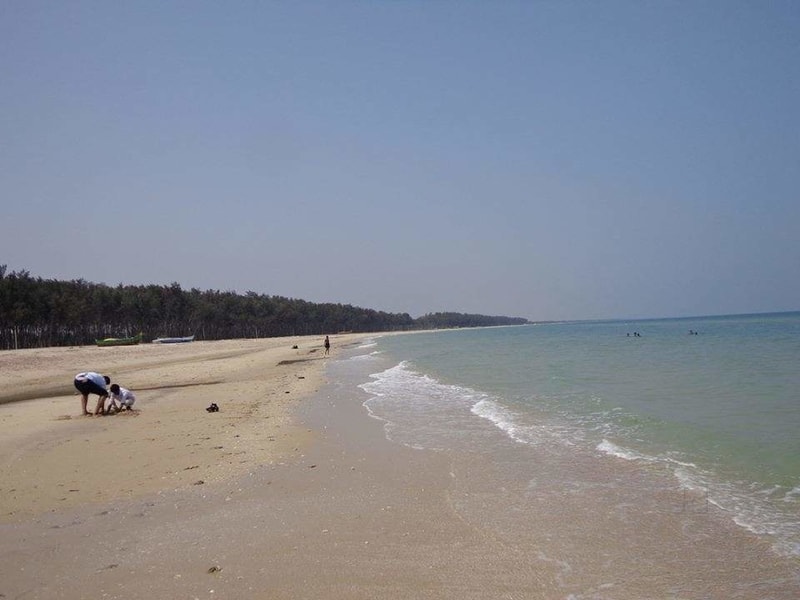 The Serene Ariyaman Beach at Rameshwaram

The beach at Ariyaman stretches a length of 2 kilometres and a width of 150 metres. Adventurous souls can indulge in some water sports like parasailing, water scooter rides and windsurfing.

The beach also offers a children’s park, an aquarium and a museum as well. The casuarina groves offer a wonderful beachside venue for picnickers to the place.

Front View of the Kothandaramaswamy Temple

Located very close to the sea, this temple to Kothandaramaswamy is approximately 500 years old. This temple has the idols of Rama, Sita and Lakshmana along with that of Vibhishana, the brother of Ravana who sided with Rama during the war.

Many believe that Rama crowned Vibhishana in this place. The temple’s walls have paintings which tell us this story. 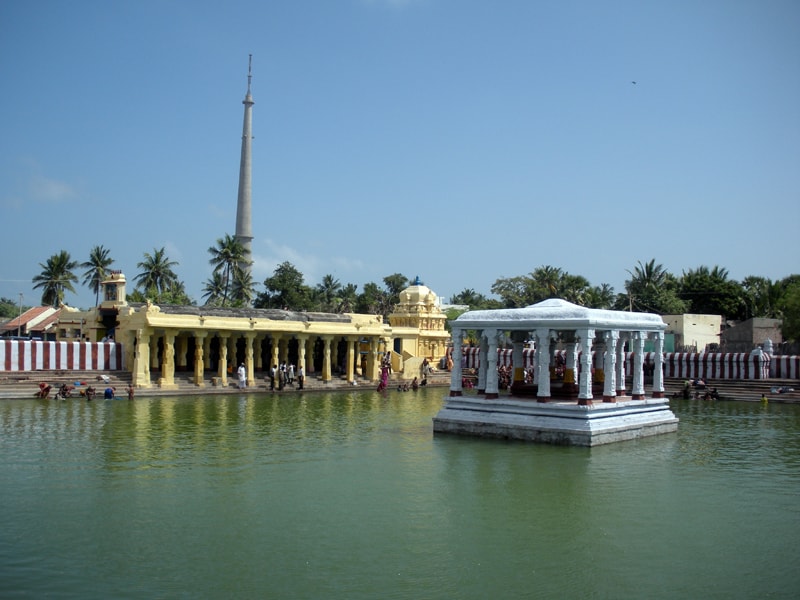 Between a temple dedicated to Lakshmana and a Ramanathswamy Temple, is a sacred pond. The Lakshmana Temple is engraved with images from the mythological story of Ramayana.

The Ramayana is a part of the ancient literature of India, and it is a joy to see these stories set in stone for those who are familiar with them.  It is custom for visitors of the temple to take a dip in the pond that sits near this temple, but it is not mandatory. 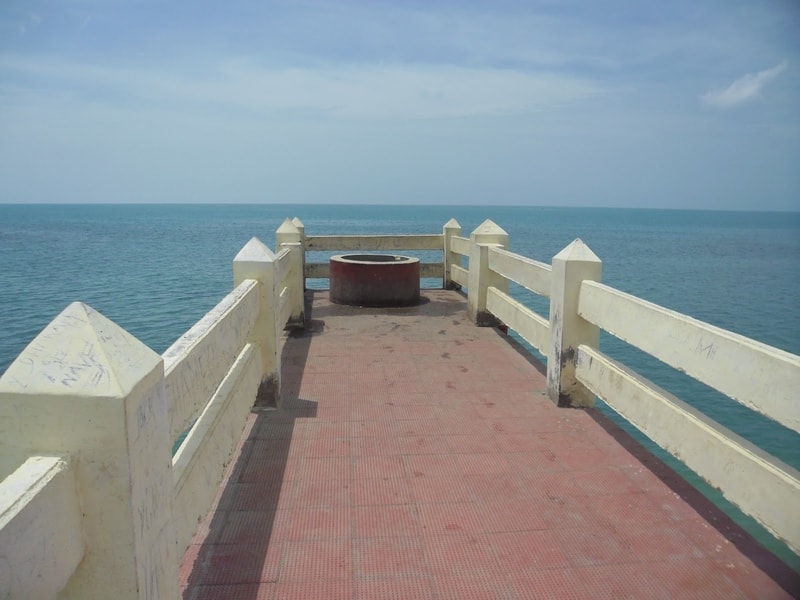 The Well with Sweet Water in the Middle of the Sea

The sacred stories of the Ramayana, generally considered mythological, have many physical locations and remnants spread across the Indian subcontinent, and this is one more.

The Villoondi Tirtham, which translates to “the buried bow,” is part of the Ramayana. Rama was said to have shot an arrow into the river to form a shower of water for Sita, his wife, to drink. There is a temple there, called the Ekantha Ramar, also part of the Ramayana.

Jatayu’s Death at the Hands of Ravana, a Painting by Raja Ravi Varma

Jatayu was an eagle that acted as Rama’s friend, informing him that Ravana had abducted his wife. In the story, Jatayu died in battle trying to free Sita from Ravana.

The Jatayu Tirtham Temple is a shrine for the eagle. which is supposedly buried here by Rama and held in great reverence by the pious Hindus of India. 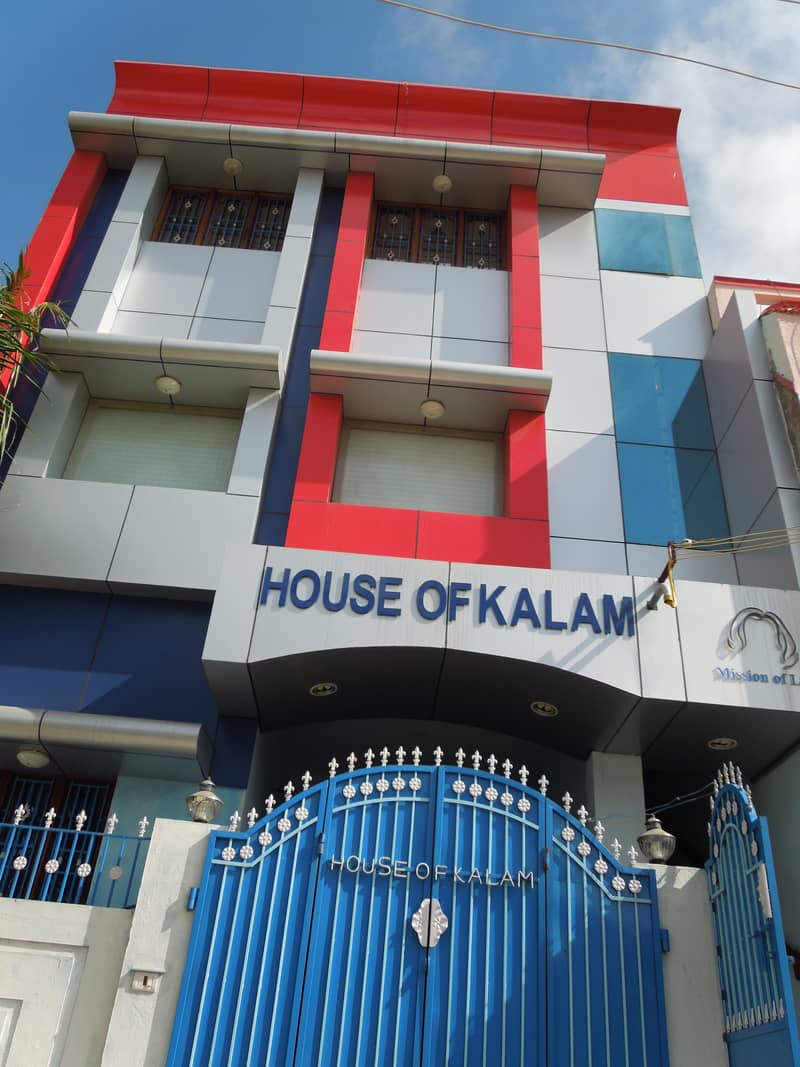 External View of the House of Kalam at Rameshwaram

Rameshwaram’s claim to fame has always been irrefutable but the locals found a reason to rejoice in the appointment of their beloved neighbour as the President of India.

His name is Dr. Abdul Kalam and his claim to fame lies in his knowledge of science, his interest in space exploration and his love for writing.

A trip to Rameshwaram is considered very important and a must-attempt pilgrimage at least once in a lifetime by Hindus.

Even if they held no such belief, the religious and secular attractions of Rameshwaram have many people vying with each other to get here and see every single one of the beautiful places which are listed here. 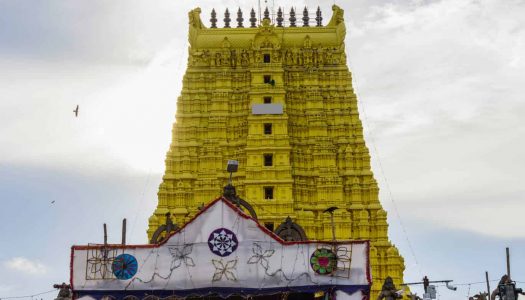 The Top 6 Temples in Rameshwaram

Located in the Gulf of Mannar, Rameshwaram is a famous island city that holds significant historical value. It is the place where Lord Rama halted during his campaign against ... 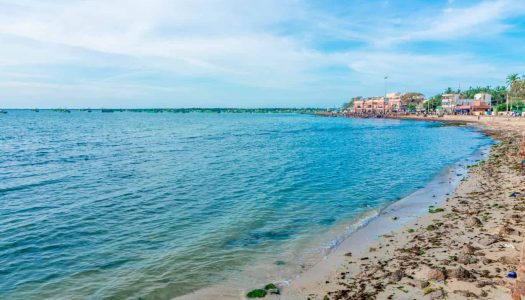 7 Magnificent Beaches In Rameshwaram That You Must Visit

Rameshwaram is a well-known pilgrimage town in Tamil Nadu. It is renowned for its beautiful temples, lush forests and well-kept roads. If you, however, look past them, you will ...