The Top 13 Places to Visit in Nagpur

Nagpur is a city that is famous for its oranges and is regarded as the second capital of the state of Maharashtra. The city is culturally as well as historically vibrant. The city also has some famous shopping areas where you can pass away the entire day away.

Nagpur is also known for its lip smacking Maharashtrian cuisine. We have combined a list of places to visit in Nagpur during your stay here. Here are our top picks. 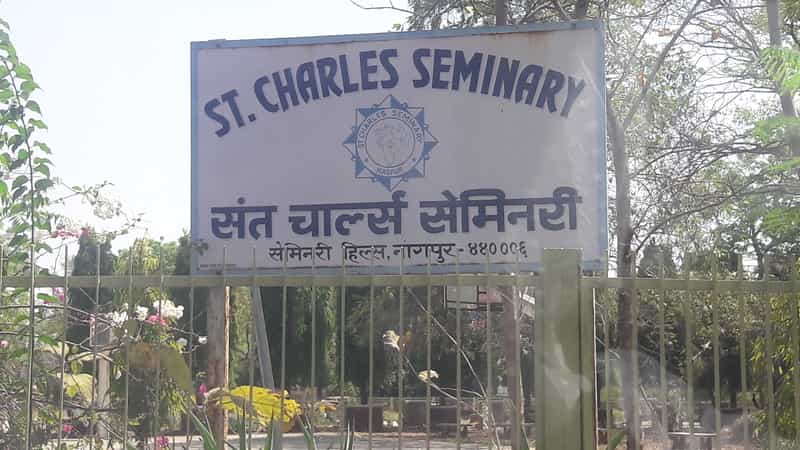 St Charles Seminary after which the hills are named (source)

The Seminary Hill is one of the most visited places in Nagpur. The peak of the hills will leave you spellbound with the panoramic view of the city. The hills are named after the St. Charles seminary that is located here.

The hills are further made beautiful by the greenery of the nearby Japanese garden and the Satpura Botanical garden as well. Be sure to take your camera along with you because when you reach this spot, you will be wanting to take as many pictures as possible.

A hip, trendy area in Nagpur, Civil Lines also houses some of the widest and cleanest roads in the city. An absolute delight for a drive any time of the day, it is surrounded by lush greenery from the various trees planted here as part of the eco nature drive.

If you head here, don’t forget to stop by for a bite or a drink at one of the pubs or restaurants here. Civil Lines, in recent times, has become a go-to hotspot in Nagpur and a definite must visit when you’re in Nagpur

Places to visit in Nagpur: Places of Cultural Importance 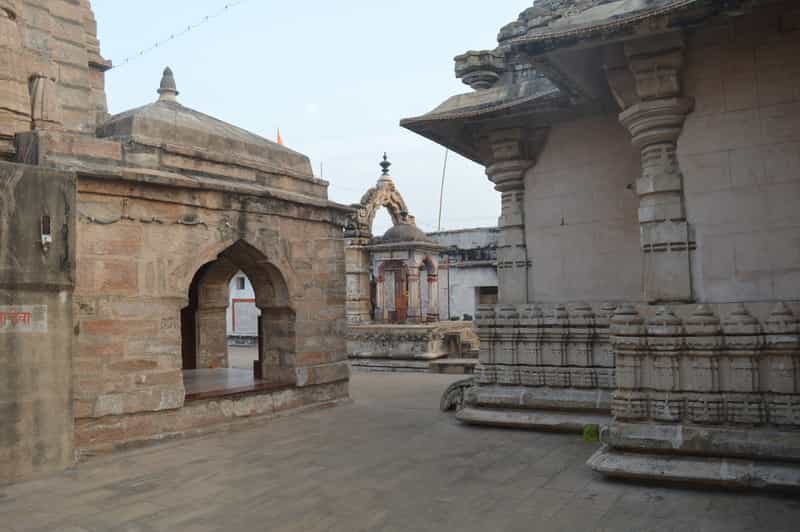 Ramtek Temple is a well-known temple in Nagpur and is often considered as a major tourist attraction. Legend has it that this is the place where Lord Rama lived while in exile from Ayodhya.

The temple attracts devotees from all over the country due to its association with the Ramayana. The best time to visit the places is during the month of November during which the temple conducts a fortnight-long Kalidasa festival. 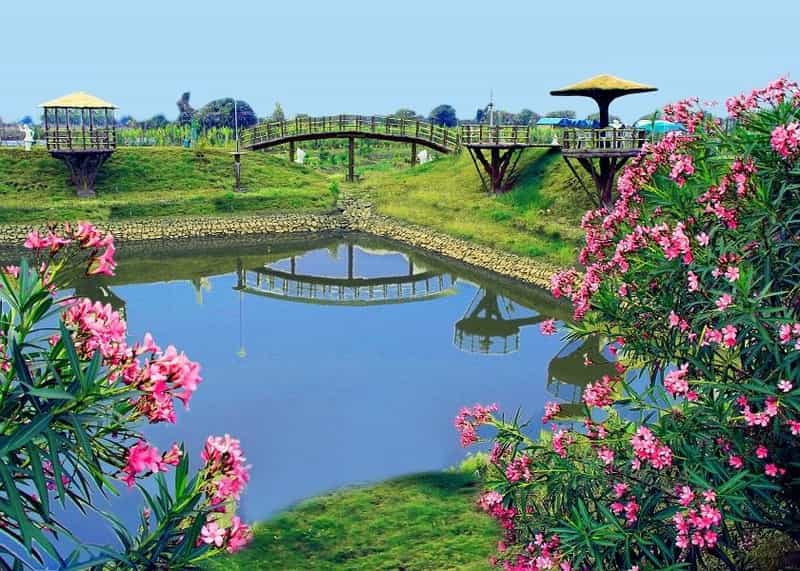 Modelled along the lines of a theme park, Ramdham is India’s largest cultural tourism park. It perfectly replicates the story of Ramayana with a few modern twists. The place also houses the largest “OM” in the world and has been featured in the Limca Book of Records as well.

Other attractions include a Shivling made of ice and many replicas of Indian temples along the likes of Ashtavinayak and Vaishnodevi. There are models of gods like Rama and Ganpati that you can take home souvenirs after your visit here. 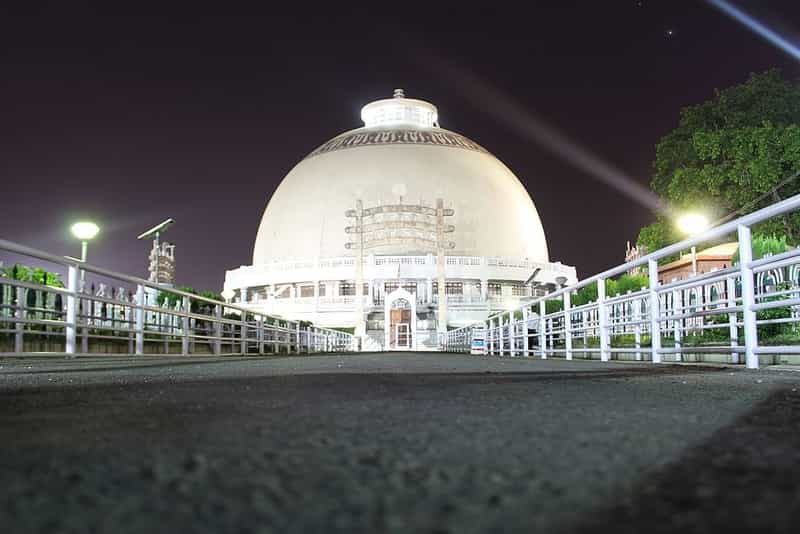 The Dhamma Chakra Stupa is a popular Buddhist monument in Nagpur. It is an absolute architectural marvel and is built entirely out of Dholpur Sandstone marbles and granites. The entire structure stands towering at 120-feet-tall.

This place is particularly visited by people who follow Buddhism or are intrigued by the teachings Buddhism.This place sees major footfall during Ashoka Vijaya Dashmi, during which people come here to convert to Buddhism. One of the top places to visit in Nagpur.

Places to visit in Nagpur: Lakes 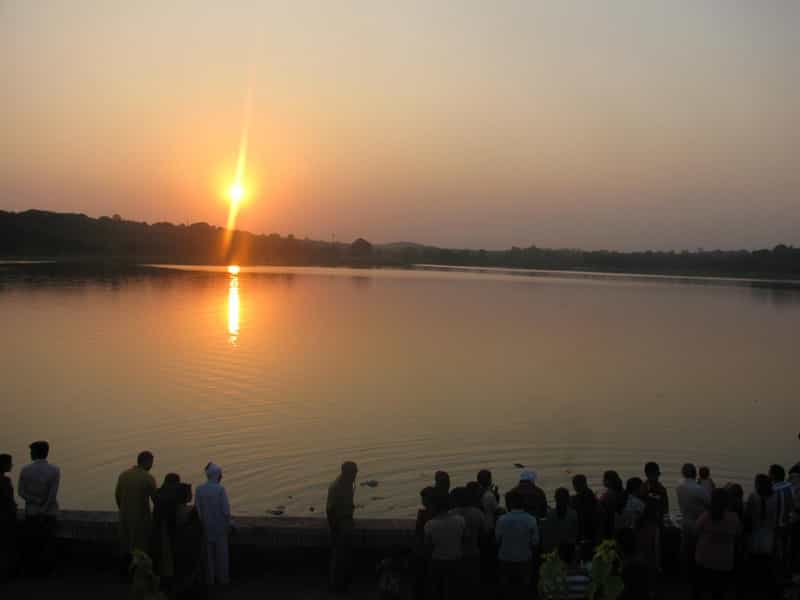 Tourists Enjoying the Ambiance of the Futala Lake

The Futala Lake in Nagpur is one of the most famous spots. It is spread across 60 acres and is the second largest lake in Nagpur. The Futala Lake was built by the Bhonsle kings of Nagpur who ruled and oversaw the construction of the city as well.

The lake also has colorful fountains that are another coveted attraction. The lake sees major footfall during evenings when the lake is lit up by a series of halogen lights that run by the lakeside. People from all over Nagpur come here to admire the beauty of the lake. 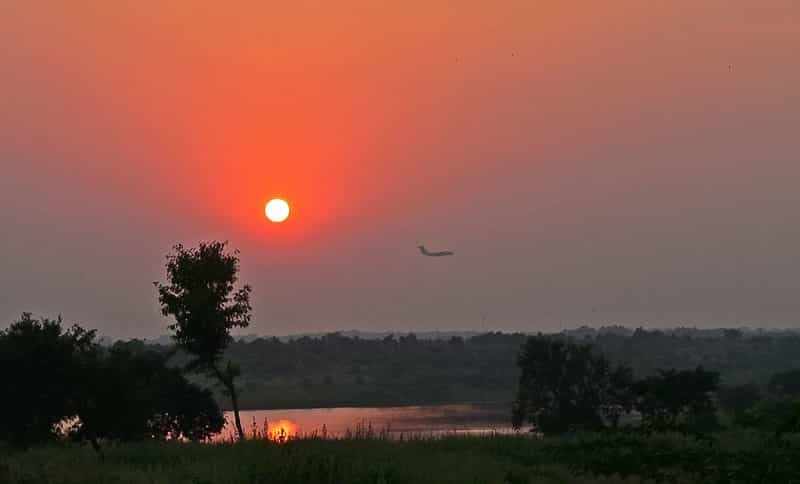 Watch the Sunset From The Ambazari Lake

Ambazari Lake is the largest of all the 11 lakes in Nagpur. The lake was constructed for use as a source of water to the residents of Nagpur.

The name Ambazari comes from the Marathi word Mango, given the fact that the lake is surrounded by them. The lake is also surrounded by some beautiful gardens where you can spend a day with your family and loved ones. There are activities like boating conducted here for visitors. The lake also has a mini playground where children can have a gala time

Places to visit in Nagpur: Places of historic importance 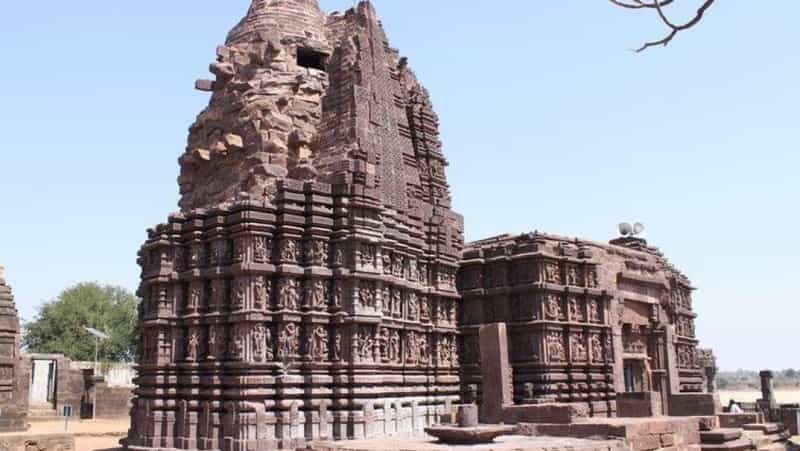 Markanda was once a prosperous town but over the years has fallen to ruin. The fact that the town has been mentioned in Hindu epics of Mahabharata and Ramayana both goes to show how old the city really is.

The town initially had 24 temples but now only 18 exist. Of the 18, though, only four are maintained and open to visitors. The town is also lined with a series of paintings and sculptures that are not only beautiful but also awe-inspiring. Markanada should be on every history buffs list of places to go to while in Nagpur. 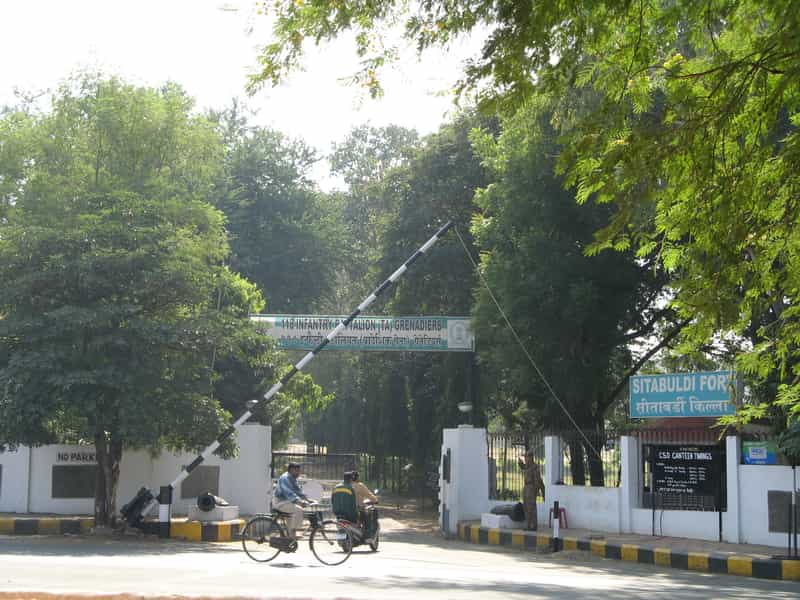 The Sitabuldi Fort in Nagpur has seen many gruesome battles that have been fought on its grounds. The most famous perhaps is the one that was fought between Appasaheb and the British forces in which the British forces eventually emerged victoriously.

The British forces were so taken aback by the strategic point of Sitabuldi that they decide to convert it into a fort. Post-independence the fort is now home to the Indian Army 188th infantry battalion and remains open to the public on Republic Day, Independence Day and Maharashtra Day. 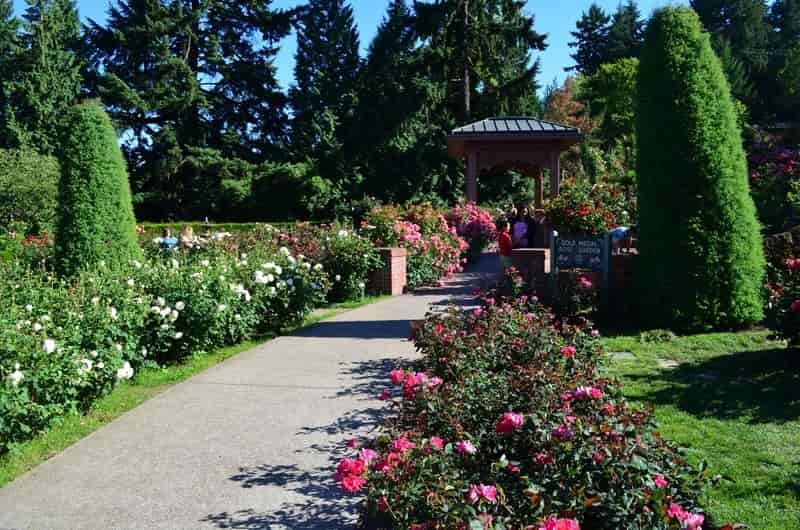 The Japanese Rose Garden is the perfect place to get away from the daily hustle and bustle of Nagpur. The garden is an aesthetic beauty one of the hidden gems of Nagpur.

The garden has grown its roses in a technique native to that of Japan’s gardeners. The garden will leave you blissfully mesmerized by its beauty. The garden is also away from the pollution that the city of Nagpur. You can also gain some insight into the Japanese way of gardening while on a guided tour in the gardens. 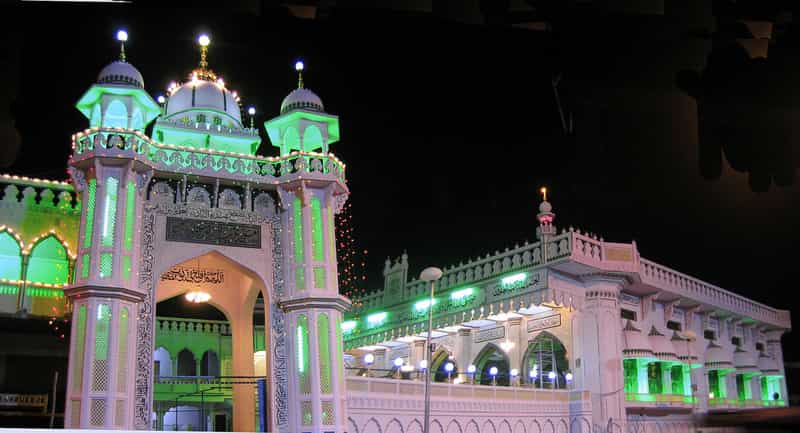 The Gharib Nawaz Mosque is located in the Mominpura area of Nagpur. The mosque is a hidden gem and pays absolute tribute to the Chishti style of architecture.

The inner walls of the mosque are carved entirely out of marble and have 27 arches in total. There are verses from the Quran that are etched in a particular calligraphy style that add to the overall beauty of the mosque. At night the mosque is lit up and is another spectacle to behold when in Nagpur. 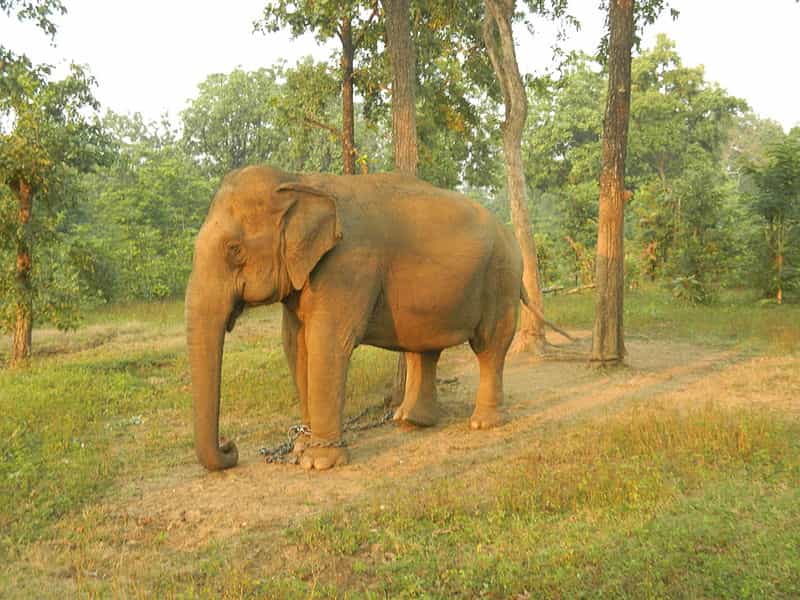 An Elephant in Nagzira

The Nagzira Wildlife Sanctuary is one of the best tourist places in Nagpur. Located in the Bhandara as well as Gondia District, the sanctuary holds a plethora of wildlife animals. The key highlight of the sanctuary, however, are the tigers that the sanctuary aims at protecting.

The tiger project was started in 2012 owing to the dwindling population of tigers and it is for this reason that the sanctuary was merged with another local reserve. The sanctuary is also home to over 35 different types of mammals and over a 166 species of birds. 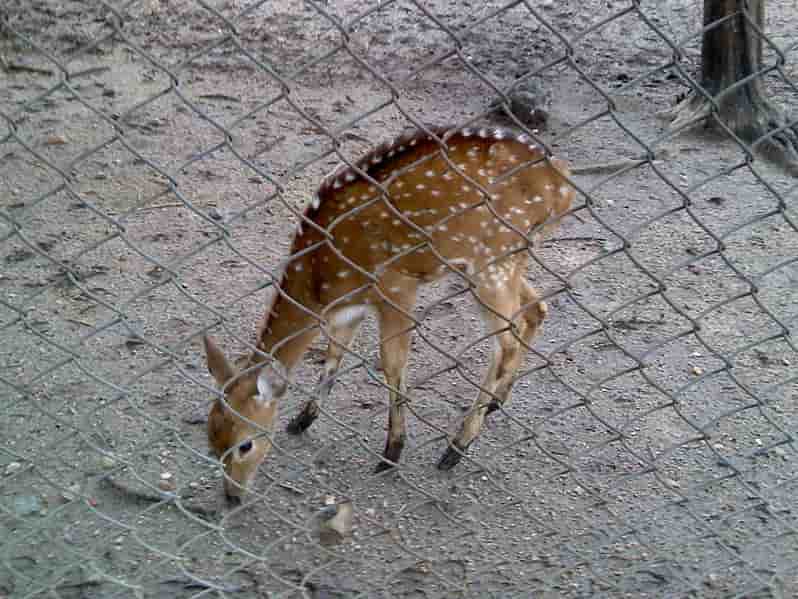 The Maharajbagh Zoo is located in the heart of the city. The zoo is quite famous amongst the residents of Nagpur and is often frequented by families and their children. The zoo is home to a variety of animals, such as lions, tigers, leopards, and peacocks.

The zoo is also a highly sought picnic spot. The zoo also has a garden that has been converted into a botanical focused garden with a collection of exotic herbs, shrubs, and ornamental plants.

Nagpur is a city that is a perfect mix of culture, modernization, and history. The city is one of the upcoming cities in Maharashtra and has the highest literacy rate in all of the state.

So the next time you’re in Nagpur do visit the places mentioned above and let us know of your experience in the comments section below.

15 Top Things to Do in Nagpur

Nagpur, famously known as the Orange City, is the third most populous city in Maharashtra, with a large urban area, too. The city also has one of the highest literacy ... 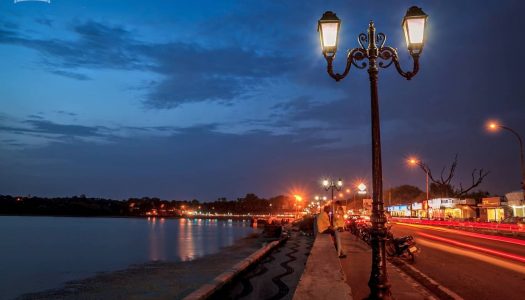 Discover the 12 Best Places To Visit In Nagpur At Night

Nagpur, third largest city in Maharashtra, is known for its different varieties of oranges. In recent times, Nagpur has seen a massive influx of people. Due to the growing number ... 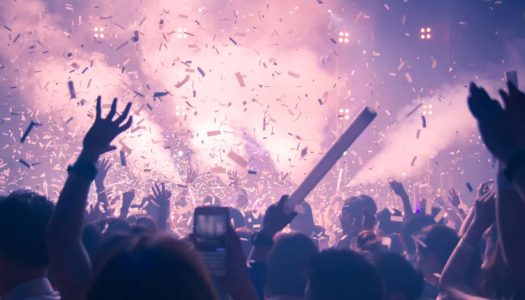 Nagpur is a Maharashtrian city known for its temples and other religious sites. However, the nightlife scene in Nagpur will surprise many, and in a good way. Nagpur is home ... 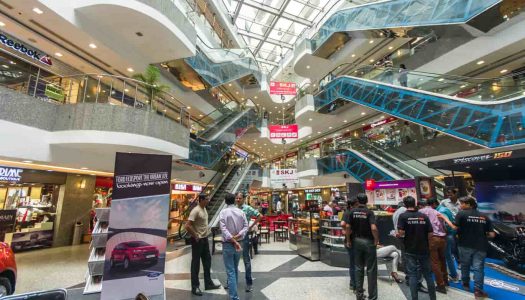 11 Places in Nagpur To Shop Till You Drop

Nagpur is often ignored when discussing up-and-coming cities in India. But it deserves to be part of the discussion. Part of the smart cities programme and a great escape from ... 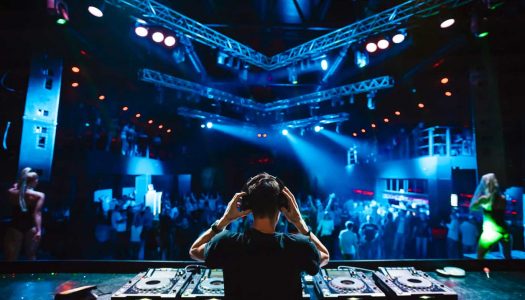 The Top 10 Pubs & Nightclubs in Nagpur For A Great Party

Nagpur is known for its beautiful parks, ethereal temples, and delicious food. In recent times, the city has seen an influx of tourists, especially young people. With so much ... 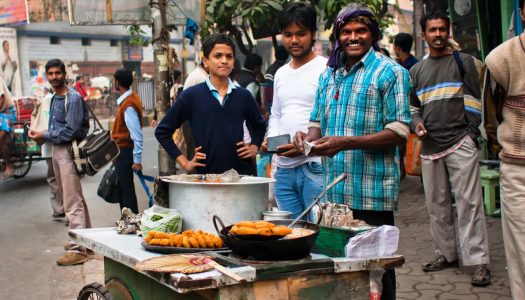 A Delicious Guide to the Best Street Food in Nagpur

When compared to other cities in Maharashtra, Nagpur’s street food scene doesn’t have too much hype. But, you will be shocked by how good the food is in the city ...