The 14 Best Places to Visit in Dharamshala

Located in the picturesque valley of Kangra in Himachal Pradesh, Dharamshala is a serene hill station situated at an altitude of 1475 meters above sea level. Surrounded by snow-clad mountains and thick deodar cedar trees, this beautiful hill station has an interesting culture and an old-world charm.

His Holiness, the Dalai Lama, spiritual leader of the Tibetan people, lives here and this is one of the main reasons Dharamshala is a much sought-after tourist destination in India, though the natural beauty is reason enough. In the summer, when the temperature soars, Dharamshala tourism is at its peak. Let’s have a look at the best places to visit in Dharamshala: 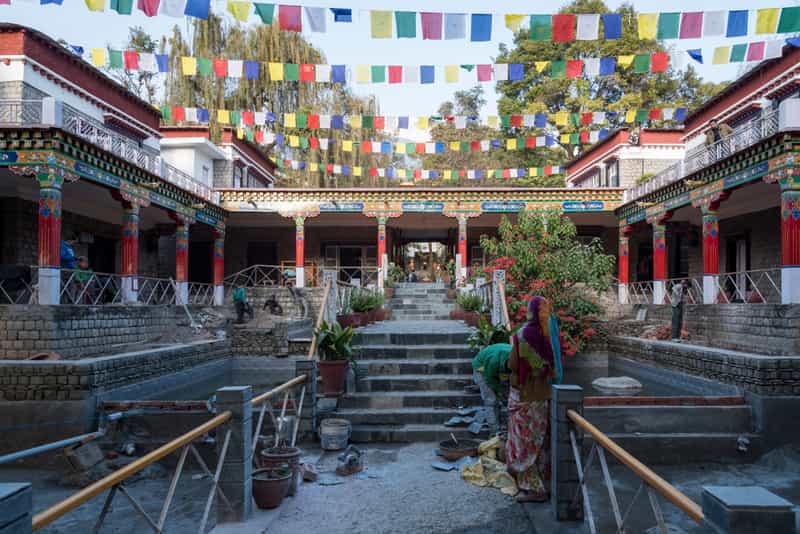 The Norbulingka Institute is situated 6 kilometres southeast of Dharamshala. This is a beautifully designed space where one can learn about the preservation of the Tibetan culture through handicrafts. Through studio workshops, visitors can meet the master craftsmen and learn the intricacies of the craft.

Workshops are held in many buildings situated inside the complex and there are plenty of seating places for those who just want to observe how handicrafts are made. The institute has a tea shop and a restaurant as well as a shop that sells the Tibetan crafts that are produced at the Institute. 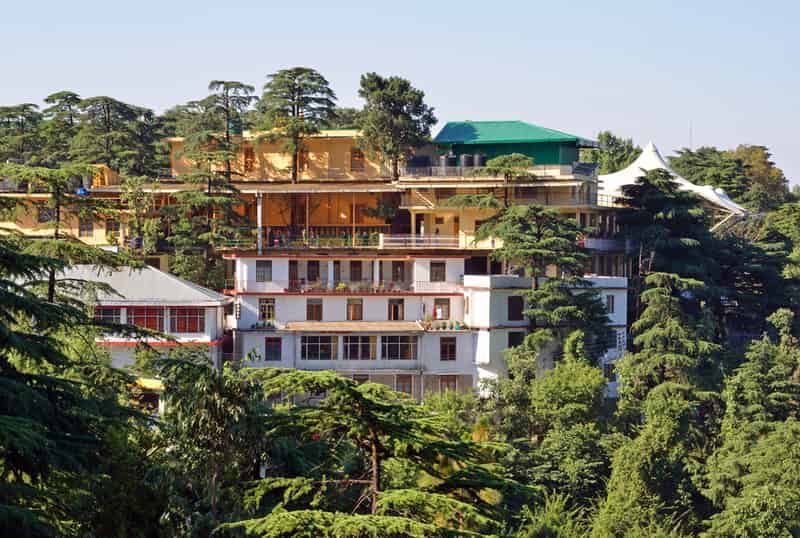 The Dalai Lama Temple Complex is located in upper Dharamshala and it is a short walk from the McLeod Ganj bus stand. This peaceful and serene temple complex is open from sunrise to sunset.

The fluttering prayer flags and the chanting of the monks make this place ideal for morning meditation or long relaxing walks. A must visit for a glimpse of rich Tibetan art and culture. 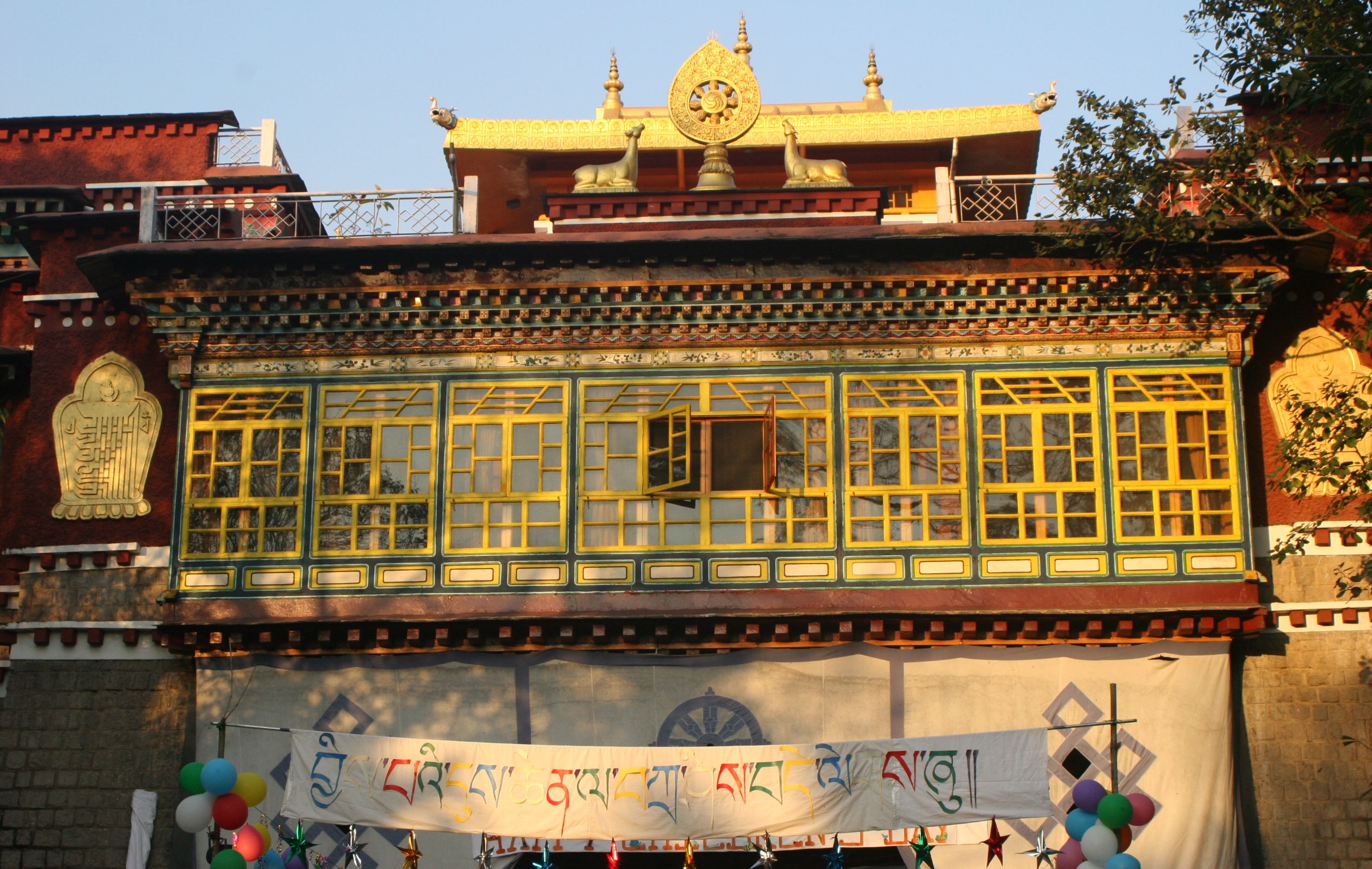 Tsuglag Khang is a peaceful place that resonates Buddhist culture. It was named after the 7th century temple in Lhasa, Tibet. One of the first structures to be built when His Holiness arrived in India in 1959, it is now the residence of the Dalai Lama.

Tsuglag Khang also houses the Namgyal monastery. Apart from these, it also has a café, museum and a library. The Dalai Lama holds his private and public audiences and public teachings here. Thousands of pilgrims come here every year seeking the blessings of His Holiness. 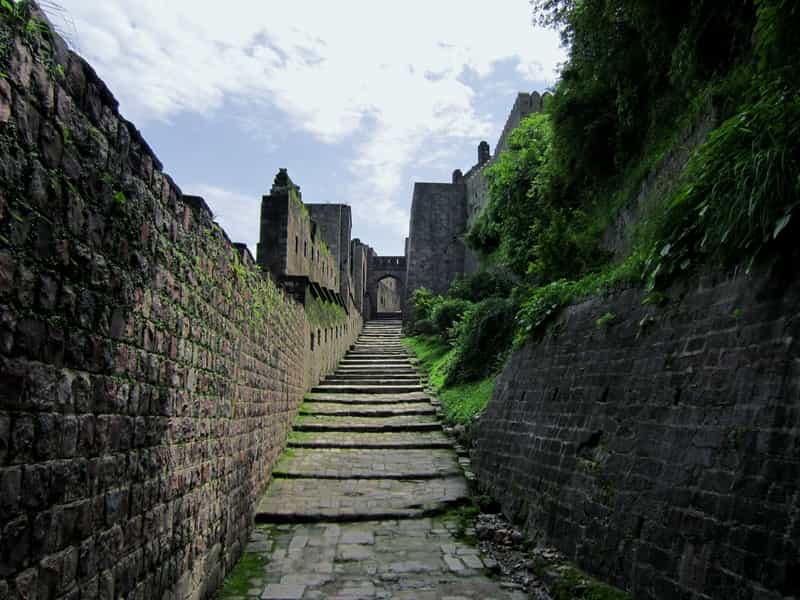 The fort is a majestic example of Kangra architecture. Built by the royal family of Kangra way back in the 4th century BC, this is the largest fort in the Himalayas and also one of the oldest forts in India. 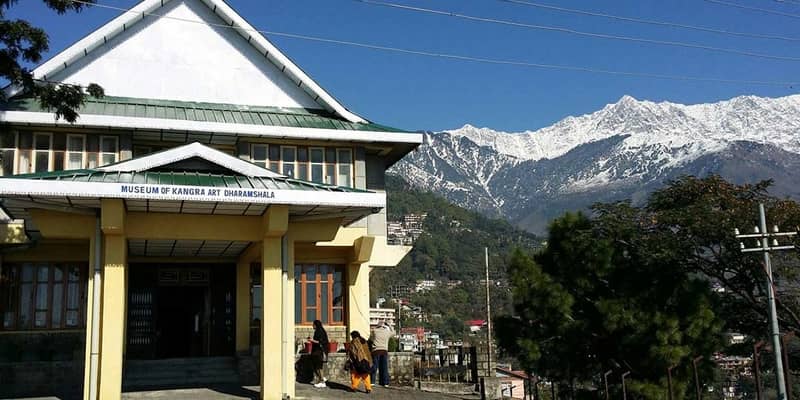 Inaugurated in 1990, this museum has many artifacts from Tibetan and Buddhist cultures. The museum has preserved artifacts from the cultural past of the Kangra valley. Some of the ancient artefacts include the temple carvings, miniature paintings, weapons, and the palanquins that belong to the local royal community.

It also has a collection of rare pottery and sculptures. Apart from these it also showcases jewelry of various tribes and embroidered costumes. Some of the artifacts that are displayed in the museum date back to the 5th century.

6. St. John in the Wilderness Church 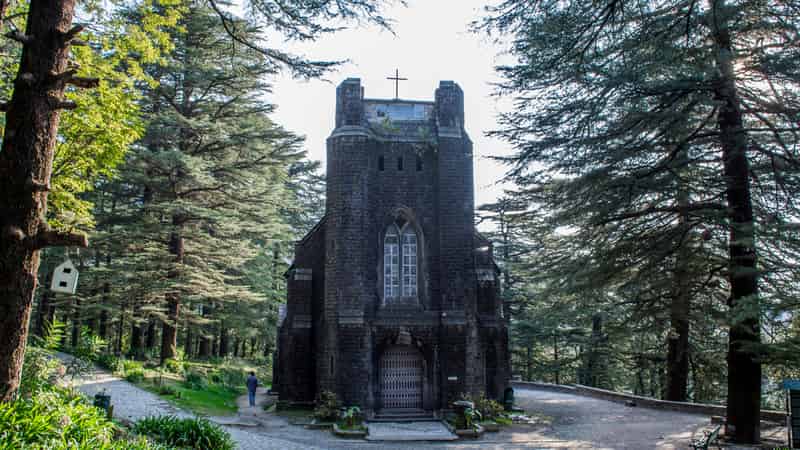 This is a heritage monument in Dharamshala. It is a quaint church that was built by the British during the 18th century.  The structure is constructed from stone and the church has stain glass paintings on all of its windows and at the top of the tower.

The St. John in the Wilderness Church has an old-world charm to it, with plaques dedicated to Scotsmen and English men of the Garrison who stayed there during the 18th century. 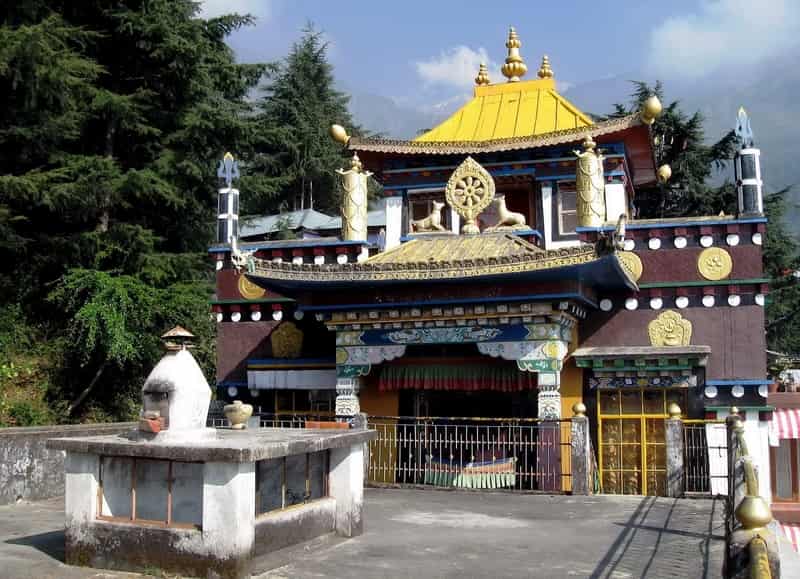 Following the 1959 Tibetan uprising, this monastery was relocated to Dharamshala. It was originally established by His Holiness the 3rd Dalai Lama in the year 1575.

It is one of the main centers of learning of the Tibetans in Dharamsala. One of the most frequented places by tourists, this monastery houses around 200 monks. 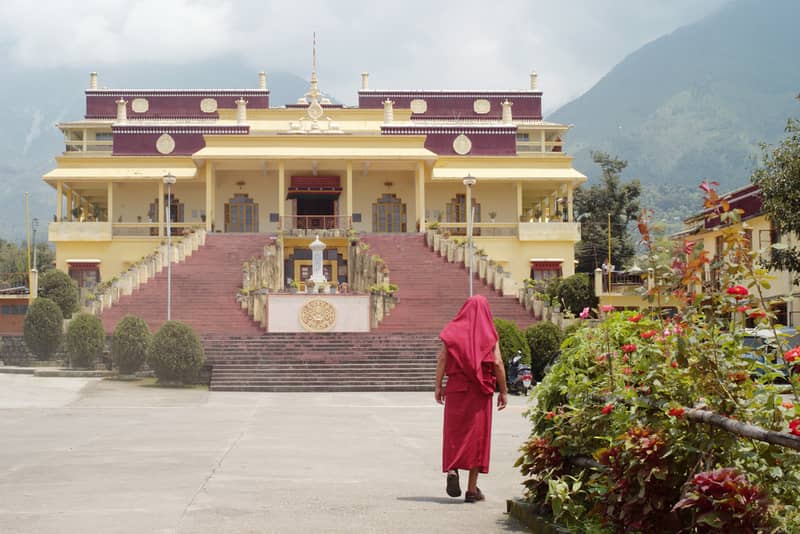 The Gyuto Monastery is a serene place that was established in 1474 by the disciple of His Holiness the Dalai Lama. It is considered one of the world’s oldest monasteries. After the Chinese invasion of Tibet, this monastery was re-established in Dharamshala.

Around 500 monks live here and learn Buddhism. This is an absolute must visit for people who want to get to know more about Buddhism. 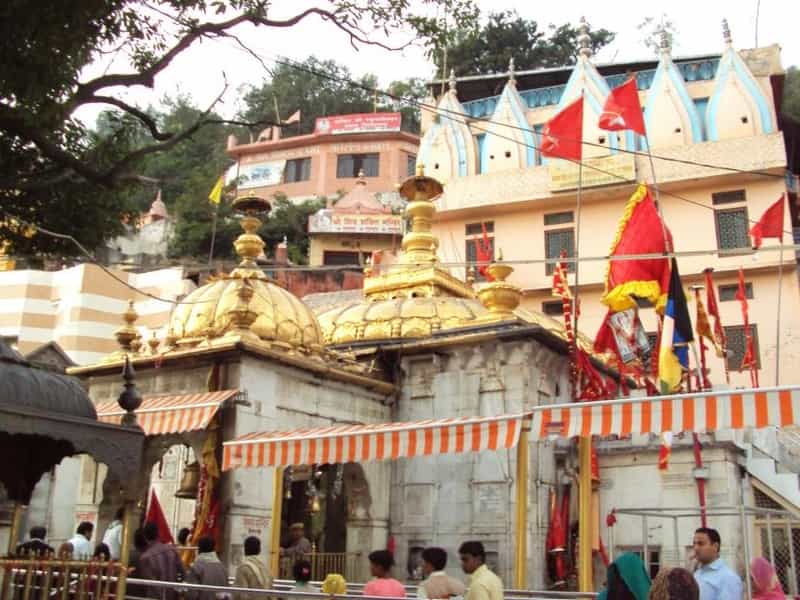 Jawalamukhi is one of the most revered temples dedicated to Goddess Durga. It is one of the 52 Shakti Peethas for the Hindus. Legend has it that Sati’s tongue fell here and the goddess is manifest as the small blue flame that burns through the crevices in the rocks.

This temple has no idol, only a flame coming out of the rocks and devotees worship this flame with fervour. Aartis are performed five times a day. The Jawalamukhi temple is near the Dharamshala-Shimla road and is around 20 kilometers from Dharamshala. 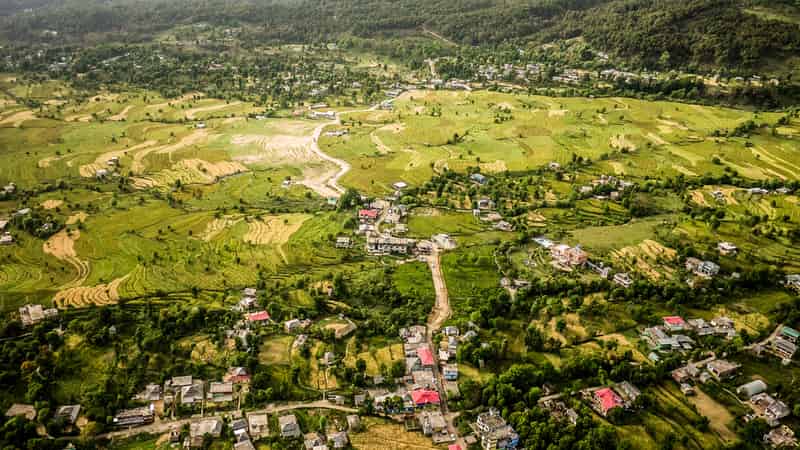 This beautiful valley situated amidst the mighty Dhauladhar mountain ranges. The mesmerizing view of the snow-capped mountains will take your breath away.

The drive from Dharamshala to McLeodGanj has many viewpoints, all are worth exploring. Time often stands still in a place like this; the picturesque view will be etched in your memory forever. 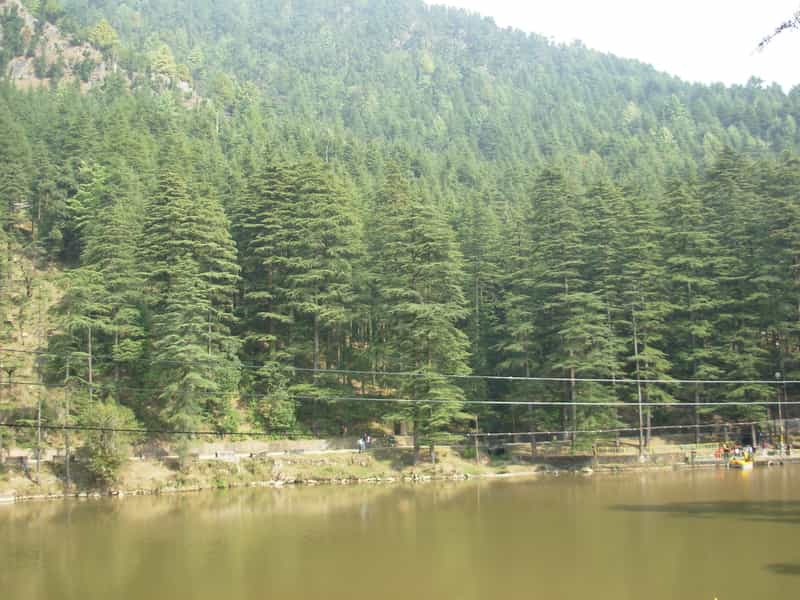 The Dal Lake is named after its counterpart in Srinagar, and is most beautiful between May and October. This lake is set amidst the lush green Deodar forests at an altitude of 1775 meters.

It is located at a distance of 2 kilometres from McLeod Ganj Market. The Kali temple which is located near the banks is home to a spectacular annual fair. 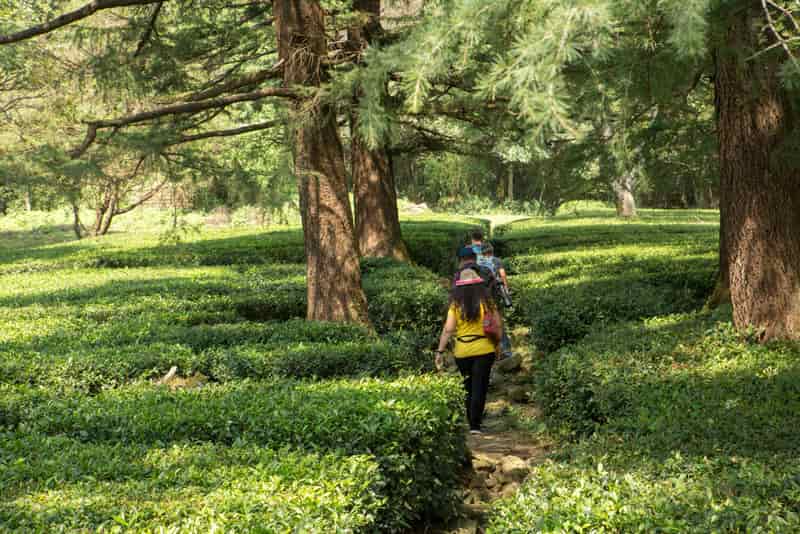 A tea garden in Dharamshala

Tea gardens in Dharamshala are spread over acres of land and are a picturesque site. There isn’t really much to do here, but one can spend a couple of hours just soaking in the peaceful and calm environment and being one with nature. Needless to say, it is also a great place to pick up some fresh mountain tea. 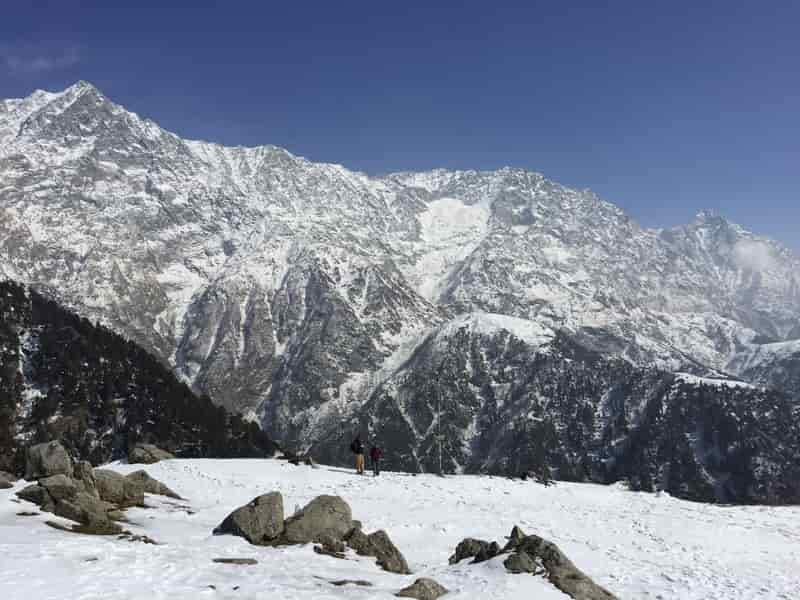 It is said that this is where Lord Hanuman rested when he was returning with the Sanjeevani Buti. This majestic and magnificent viewpoint is located at an altitude of about 5639 meters above the sea level.

Also known as the ‘White Mountain’, the Hanuman-ka-Tibba is the highest point in the mighty Dhauladhar mountain range and is the ideal place to see some breathtaking sights of the valley. The Pir Panjal range in the north can also be spotted from here. 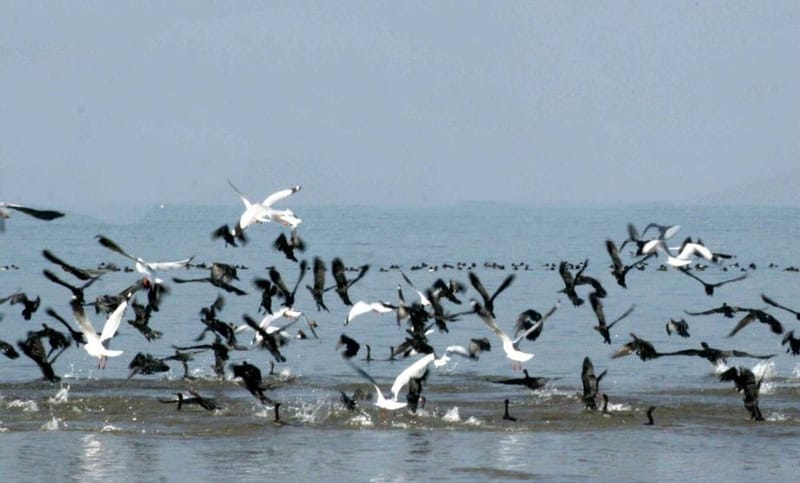 The Pong River Sanctuary, with the Alpine forest and the mighty Dhauladhar Mountains covered in snow as a backdrop, offer a very beautiful and tranquil atmosphere. The fact that it is a major habitat for migratory birds, is a bonus for bird watchers and wildlife enthusiast.

It is very popular for plovers, waterfowl, black-headed gulls, etc. The migratory ducks from Siberia are a common seen between November and March. If you are a nature lover and a wildlife enthusiast, then you can’t miss the ‘Bird Watching’ festival which is organized in the month of January.

This is our list of the coolest places to visit in Dharamshala. A wondrous location, you could even spend a few months here. Just take in the local sights, the delicious food and enjoy the cool air of the mountains. Let us know how your trip went in the comments section.