20 Tourist Places In Bhopal: The Ultimate City Guide For Your Travel Plans

Bhopal is a hidden gem amongst the many glorified tourist places in Madhya Pradesh. It is one of those cities that has too much to offer the tourists but is often less visited. History, nature, art, and architecture are just a few that embodies this destination. To truly uncover the magic this place has to give, one just needs to step into the city and experience its culture and personality. Let’s start with some of the must-visit tourist places in Bhopal.

The best time to visit this destination is during the winter or pre-summer as the weather would be pleasant and makes it wonderful to roam around. Plan your itinerary ahead to cover the maximum number of places you prefer to see. You can also let your taste buds wander across some authentic local dishes, from savouries to sweets.

We have 18 tourist places in Bhopal that one shouldn’t miss when visiting. It’s time to unveil the true beauty of the spot, layer by layer.

Sanchi is a World Heritage Site that is synonymous with beautiful Buddhist architecture created during the time of the great Mauryan ruler, Emperor Ashoka. It was a significant place built to resonate the Buddhist philosophy across the lands. It is renowned for its magnificent Stupas, Monasteries, and Temples. Named a significant site of Indian cultural roots, Sanchi is where you can get a peek at the Golden age of Buddhism. This makes for one of the best tourist places in Bhopal for a family vacation.

A significant marvel of the city, Gohar or Gauhar Mahal is a palace built by the then ruler of Bhopal, Quidisiya Begum or Gohar Begum. It stands out for its Indo-Muslim architecture and paints a picture of the grandiose the place held. It is situated on the banks of one of the famous water bodies in the city, the Upper Lake. For entry timings, visit this website.

Located atop a hill in the Vindhya range, Raisen Fort is a majestic sight with many gateways and stunning palaces – the Raja Rohini Mahal, the Badal Mahal, the Jehangir Mahal, Hawa Mahal, and Kachehari Mahal are some of the most prominent. The places are bedecked with beautiful carvings and are great to capture some timeless photos.

Rani Kamlapati Palace is a heritage palace built in the year 1722. Its architectural relevance and spectacular beauty have designated it as a Monument of National Importance by the Archeological Survey of India. Hinting at a contemporary style of design, this palace is a gorgeous double-storied structure with beautiful arches and pillars. It is located between the Upper and the Lower Lake.

Shaukat Mahal is another architectural marvel in Bhopal built by a Frenchman during the time of Sikander Begum. It is popularly known for having an amalgamation of Indian and European styled monument.

Sardar Manzil is the great hall present within the Shaukat Mahal which was used as a Hall of Public Audience during the times of the Nawabs. The place is red in colour and echoes with grandeur.

Peek into the Wildlife

Van Vihar National Park and Zoo are revered as a symbol of eco-restoration as it is situated within the city limits of Bhopal. It houses an array of animals such as tigers, lions, hyenas, chitals, black bucks, blue bulls, crocodiles, and so on. One can also spot vivid coloured birds like spoonbills, painted storks, purple herons, and more. Get into a sense of natural adventure at one of the most amazing tourist places in Bhopal. Explore other wildlife destinations in Madhya Pradesh

Bhojtal or Bada Talaab, now known as ‘Upper Lake’, is a beautiful spot in the city to relax and enjoy some quiet time. This man-made lake carries historical significance and is one of the biggest sources of drinking water for the city. It has a small island in the middle named Takia Island, which has a tomb of Shah Ali Shah. In this gorgeous area, one can enjoy some water sports like boating, canoeing, kayaking, water skiing, and more.

This lake is connected to Chota Talaab, now known as ‘Lower Lake’ by a bridge called Pul Pukhta. Both of them are fed by the river Kolas. This is one of the most calming tourist places in Bhopal to relax.

Bhimbetka Rock Shelters are ancient caves that house some of the oldest prehistoric cave paintings that go back 10000 years. The name is assumed to mean that this was the sitting place of Bhima from the great epics of Mahabharata. Some of them depict stories of dancing, hunting, armies, etc., of different ages. It is believed to hold some of the earliest petroglyphs in the world. Also home to the oldest known rock art in India, this location makes for one of the most mysterious tourist places in Bhopal. The location has multiple caves with prominent art.

A little away from the main city of Bhopal lies the Udaigiri Caves, which is abode to ancient sculptures and carvings. This set of caves has some Hindu and Jain pictorials. Some of the most notable ones are of Lord Vishnu rising as his boar avatar to save the earth and the long sculpture of Sheshashayi Vishnu lying on the coils of an enormous snake. This place is as unique as it can get for its beautiful lingas with faces carved on them.

Kerwa Dam is a pleasant getaway from the city and a great picnic spot surrounded by gardens and eateries. It is a wonderful place to enjoy scenic views and sunsets. Located near a forest, one can spot various birds here. The place has a small temple too.

13. Bhadbhada Dam – Stop to capture some great photos as you pass the place.

14. Kolar Dam – It is another beautiful picnic spot to enjoy.

Get to know the history

16. The Regional Museum of Natural History – Find captivatingly presented models and information on the relationship between nature and humans.

17. Indira Gandhi Rashtriya Manav Sanghralaya – Also known as the National Museum of Mankind, it is a wondrous anthropology museum that shares knowledge regarding the evolution of man and culture specific to India.

Laxmi Narayan Temple, also known as ‘Birla Mandir’, is situated on Arera Hill. As mentioned in the name, the temple is dedicated to Lord Vishnu and Goddess Laxmi. The place is mesmerizing and covers a large portion of the hilly terrain. It has multiple paintings, carvings, and verses of the legendary epics of Indian mythology, Ramayana, Mahabharata, Geeta, Vedas, and the Puranas. This spot is one of the best tourist places in Bhopal to visit with family.

Manuabhan Tekri is a well-known Jain temple also called ‘Mahaveer Tekri’. It has a ropeway from where one can indulge in great views of the city and beyond.

Taj Ul Masjid called the ‘Crown among Mosques,’ is the largest mosque in the country. Started by Nawab Shah Jahan Begum, it is celebrated for its marvelous architecture made of red stone and marble flooring. The holy site is located by the lake called ‘Motia Talaab’. Check out these other most famous mosques in India.

We hope that you find this list exciting and exhaustive while planning a trip to Bhopal. As you explore every face of this amazing city, you will be left wondering about the kinds of places it has to offer and yet to be discovered. Having some of the most diverse set of locations, Bhopal is the perfect place for a getaway with your family, be it with kids or your parents.

Book a safe stay with Treebo Hotels in Bhopal and explore the city as long as you want. 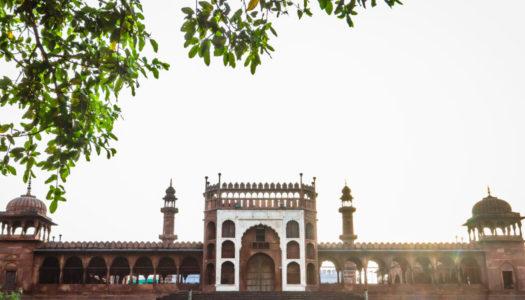 10 Best Things To Do In Bhopal for An Amazing Vacation

All you travelers looking for amazing things to do in Bhopal here is a chance for you. Bhopal, also known as the home of the world’s most renowned mosque, is ...